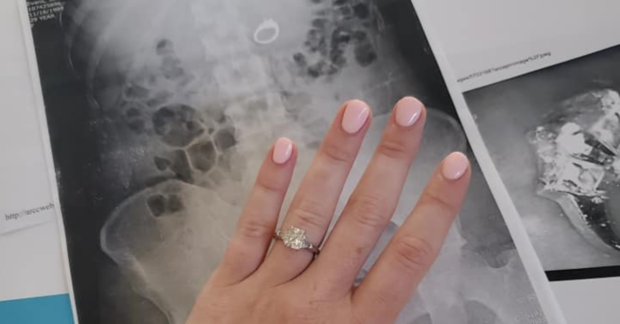 A woman swallowed her engagement ring after dreaming of a situation where her fiancé told her she had to ingest it to “protect it.”

Jenna Evans, who lives in San Diego, California in the United States, took to Facebook on Friday, Sept. 13 to recount how the ring ended up in her stomach. As per her post, she swallowed the ring last Tuesday, Sept. 10.

So, in case you missed it, I swallowed my engagement ring in my sleep on Tuesday night. I actually remember doing it,…

Evans recalled that on the night of the incident, she was having a dream where she and her fiancé Bobby were in a “very sketchy situation involving a high speed train and bad guys.”

In her dream, Bobby told her she needed to swallow the engagement ring to “protect it.” Evans followed his advice and had woken up to ingest the ring along with a drink of water. Evans was not fully aware of what she was doing since she assumed she was still asleep and dreaming.

She explained the situation to Bobby the morning after, on Wednesday, Sept. 11, when she noticed she was no longer wearing the ring.

Bobby did not believe her story right away, and instead, they found humor in the situation. “We laughed pretty hard for about an hour and a half,” Evans said.

She later went to look for medical help. Doctors appeared to be surprised when Evans’ X-ray results showed the ring inside her stomach.

Next, Evans and Bobby went on to see a gastroenterologist, a physician who specializes in health concerns related to the gastrointestinal tract.

Evans underwent an upper endoscopy, which is a procedure that entails using a flexible tube with a camera to see the lining of the gastrointestinal tract, as per the U.S. National Institute of Diabetes and Digestive and Kidney Diseases.

She announced that the operation was a success, saying, “Everything went great, they found my ring just beyond my stomach in my intestines, retrieved it and gave it to Bobby.”

“Bobby finally gave my ring back this morning — I promised not to swallow it again,” Evans joked. “We’re still getting married and all is right in the world.” JB