Marikina will sue those who dumped 56 dead pigs in river 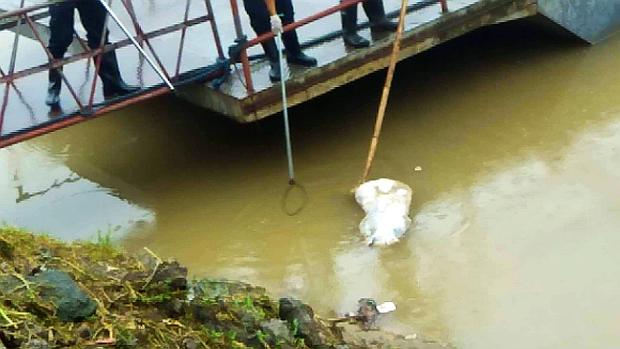 One of the pig carcasses found floating in the Marikina River. (Photo from Marikina City Public Information Office)

MANILA, Philippines — The government of Marikina will file criminal and civil cases against those responsible for the dumping of 56 pig carcasses in the Marikina River in violation of the Clean Water Act and the Code on Sanitation.

Marikina Mayor Marcelino Teodoro said on Sunday that his government was “serious” in its intent to file cases.

The civil case would allow the city to claim damages for the manpower, time, and equipment used in getting the dead pigs out of the water and disposing of them, Teodoro said.

The owner of the pigs might have nothing to do with their death, but they would still be held liable for allowing their improper disposal, he added.

Last Friday, Teodoro asked the Bureau of Animal Industry (BAI) to test one of the retrieved pigs for African swine flu.

As of this writing, the city is still waiting for the result which the animal industry conducted.

The city is also waiting for the result of a test conducted on the river for possible contamination.

Meanwhile, city authorities continue to monitor and inspect pork being sold to consumers.

Teodoro told the Department of Agriculture (DA) that the dead pigs could have come from Montalban in Rizal.

The BAI sent some of its personnel to investigate the lead.