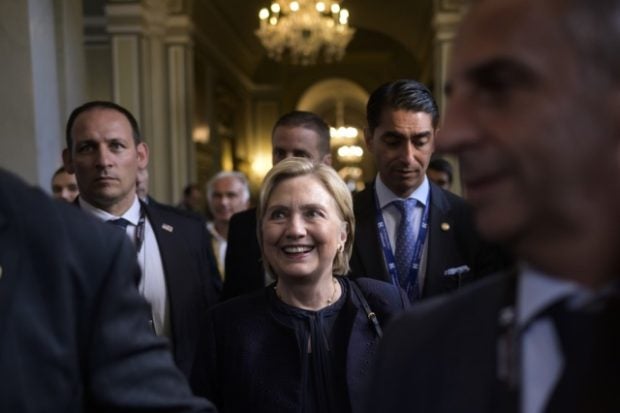 Hillary Clinton at the 45th “The European House Ambrosetti” forum on economy on Sept. 7, 2019. Image: AFP/Marco Bertorello via AFP Relaxnews

Hillary Clinton visited the exhibition “HILLARY: The Hillary Clinton Emails” by American artist Kenneth Goldsmith, which is currently on view at the Venice Biennale in Venice, Italy.

“Found my emails at the Venice Biennale. Someone alert the House GOP,” Clinton said via Twitter last Thursday, Sept. 12. The post was accompanied by a photo of her at the exhibition.

Found my emails at the Venice Biennale. Someone alert the House GOP. pic.twitter.com/eeXaKhy9Dz

The former Secretary of State stayed an hour at the exhibition, paging through and reading some of the 62,000 emails that Goldsmith printed for the installation.

The exhibition, which opened on May 9, notably mimics the interior of the White House’s Oval Office, with a stack of the infamous emails on top of a replica of the Resolute Desk.

Hillary Clinton spent an hour yesterday reading her emails at my exhibition of all 62,000 pages of them in Venice. She is pictured here at a replica of the Oval Office Resolute Desk, stacked with her emails. pic.twitter.com/V8T27klycr

After her visit, Clinton told Italian media that the email episode that agitated the 2016 United States presidential election was one of the “strangest” and most “absurd” events in American political history.

Prior to the opening of the exhibit, Goldsmith called the emails “the most important political documents of our times.”

“They have been discussed at every level of public opinion but almost no one has read them. Hidden in full view, all the emails were available online but nevertheless they have become a sort of ghost. ‘HILLARY’ is their first public appearance,” he added.

According to promotional material for the exhibition, the artist printed all the 62,000 pages of emails, which, according to WikiLeaks, were sent from the domain clintonemail.com between 2009 and 2013.

“HILLARY: The Hillary Clinton Emails” will be on view until Nov. 24 in the Despar Teatro Italia in Venice as part of the 58th Biennale of Visual Arts. RGA/JB