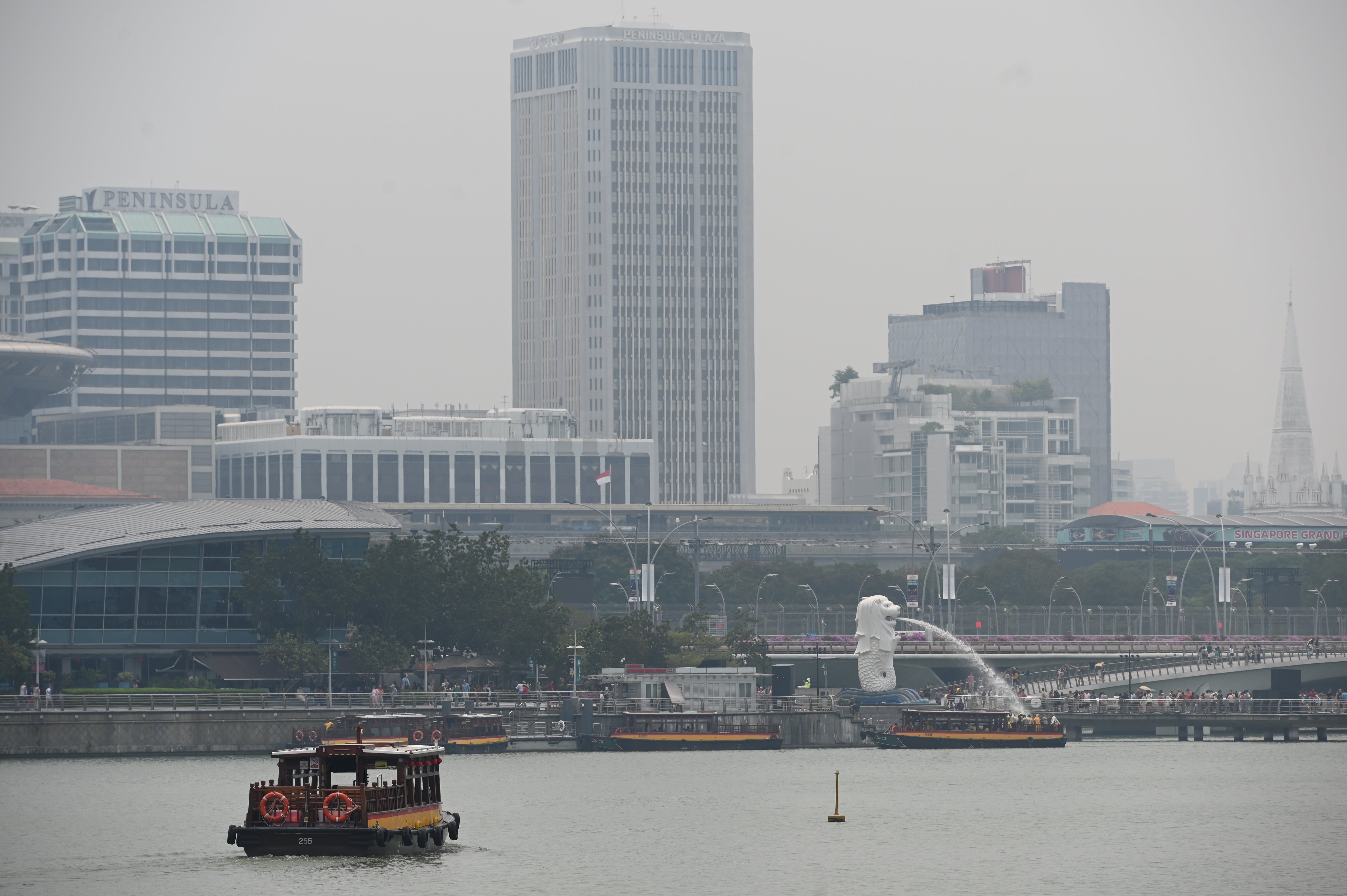 A view of Marina Bay shrouded in haze in Singapore on September 13, 2019. – The number of blazes in Indonesia’s rainforests has jumped sharply, satellite data showed on September 12, spreading smog across Southeast Asia and adding to concerns about the impact of increasing wildfire outbreaks worldwide on global warming. (Photo by Roslan RAHMAN / AFP)

SINGAPORE — The air quality in Singapore worsened on Sunday (Sept 15) morning as Pollutant Standards Index (PSI) readings crossed the unhealthy level in all parts of the island.

The 24-hour PSI reading for the north, south, east, central and west entered the unhealthy range at 1am.

A PSI reading of 101 to 200 is in the unhealthy range, for which the National Environment Agency (NEA) advises the public to cut down on outdoor activities.

The PSI crossed the “unhealthy” level on Saturday for the first time since 2016 when western Singapore showed a reading of 103 at 4pm.

Meanwhile, PM2.5 concentration readings, which the NEA says are a better indication of current air quality, were at normal levels in all parts of Singapore on Sunday.

At 8am, the one-hour PM2.5 reading ranged between 26 micrograms per cubic metre in the east and 37, with the highest reading recorded in the central part of the island. At 1pm, it ranged between 32 and 48.

The NEA said the deteriorating air quality is due to winds blowing more smoke haze from Sumatra, which is south of Singapore.

More than 300,000ha of land in Indonesia have been ravaged by fire from January to last month.

For the next few days, dry weather can be expected in Singapore and over central and southern Sumatra, and the NEA warned that the PSI may enter the mid-section of the unhealthy range if denser haze is blown in.

Minister for the Environment and Water Resources Masagos Zulkifli said in a Facebook post on Saturday evening that Singapore is ready to help “suppress fires on the ground”.

He wrote: “Singapore has offered technical firefighting assistance to Indonesia and is prepared to deploy them if requested by Indonesia.”

The NEA said in a Facebook post on Sunday that poor visibility does not mean that the air is more polluted.

It wrote: “A significant factor of visibility is the amount of water vapour in the air. Water droplets scatter light, resulting in lower visibility. Also, certain air pollutant particles attract water molecules, which results in larger particles that scatter more light. This means that on days with smoke haze and high humidity or rain, visibility can be much lower.”

It added that the burning smell from the haze is due the complex mixture of gases generated by forest and peat fires in the region.

In a statement on its Facebook page posted on Sunday, the Ministry of Health (MOH) said that it was aware of reports that N95 masks were sold out at some retail stores.

“We would like to assure the public that there are sufficient stocks in the warehouses and government stockpiles. We are working with the retailers to move available stocks to the retail shops, and stocks will be available progressively from today,” it added.

Despite the haze, some outdoor activities continued as planned on Sunday.

Organisers of the Yellow Ribbon Prison Run, which is scheduled from 6am to 1pm, said on the event’s website and Facebook page that the run will still take place.

Likewise, POSB bank said on Facebook that it would proceed with events in the POSB PAssion Run for Kids. The first two event categories, a 10km and 5km run, kicked off at 6.30am and 7am respectively, while the last event, a 3.5km non-competitive Family Walk, started at 9.30am.

Both organisers said that the events would still be held, as PM2.5 readings were in the normal range.

Meanwhile, organisers of the Formula One Singapore Airlines Singapore Grand Prix, which takes place next weekend, said the event’s contingency plan includes the possibility of haze.

In response to queries, a spokesman from Formula One organisers Singapore GP said: “In the event that the haze causes visibility, public health or operational issues, Singapore GP would work closely with the relevant agencies before making any collective decisions regarding the event.”