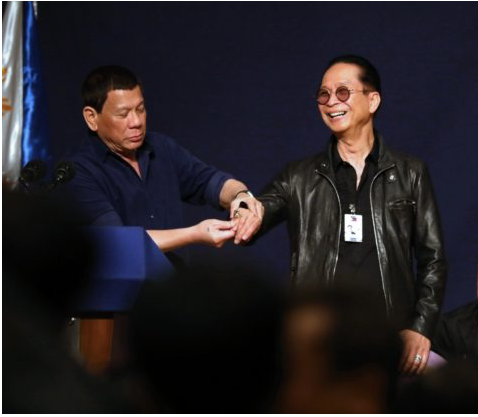 Gaite and his group said they also support the ongoing investigation of the Ombudsman against former Bureau of Corrections (BuCor) officials like ex-chiefs Nicanor Faeldon and Sen. Ronaldo dela Rosa.

Various anomalies in the BuCor had resurfaced during previous Senate inquiries following the botched release of convicted rapist-murderer and former Mayor Antonio Sanchez through the GCTA law. Among these anomalies was the “GCTA for sale.”

The opposition Makabayan bloc in the House said this racket “opens a can of worms” which proved that “Duterte regime’s crusade against crime and corruption [is] a huge scam.”

“It opens a can of worms which visibly links President Duterte and his trusted men to the mess,” they added in a separate statement. “He is responsible for this gross travesty of justice.”

Gabriela Rep. Arlene Brosas also said Duterte could not simply distance himself from the controversy as he should be liable by virtue of command responsibility.

Gaite said the apparent haste in releasing convicts through the GCTA, specifically of Sanchez, and Panelo’s supposed “referral” of Sanchez’ bid for executive clemency should be looked into.

“Madami pang nakisawsaw, example nga, base dun sa mga lumabas sa hearing sa Senate, mismong si Malacañang spokesperson Salvador Panelo. Although he claimed it was just a matter of office procedures, he should have been more circumspect, considering na he was the lawyer apparently of [Sanchez]. Medyo may ethical issue dyan no,” Gaite said.

Faeldon was criticized, and later fired, for signing a “memorandum of release” for Sanchez despite questions on the latter’s eligibility for GCTA. Republic Act No. 10592 provides guidelines for the GCTA which an inmate can deduct from his total sentence.

The Department of Justice had suspended the processing of the early release for good conduct of thousands of prisoners amid public uproar on the possible release of Sanchez.

The Supreme Court, in a unanimous decision penned by Associate Justice Diosdado Peralta on June 25, allowed the retroactive application of the grant of GCTA, meaning the law could apply even to those who were convicted before it was passed in 2013. /jpv