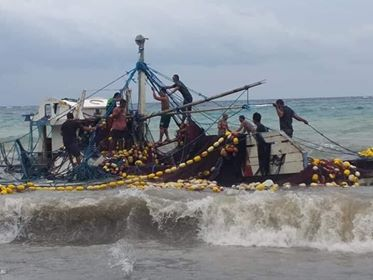 Fishermen try to salvage whatever is left of their fishing vessel that was destroyed by huge waves off the coast of Datu Blah Sinsuat, Maguindanao. (Photos courtesy of Moamar Manalao)

COTABATO CITY –– Eighteen members of a fishing crew from Lebak, Sultan Kudarat survived a sea mishap early evening Thursday, when their boat was destroyed by strong winds and huge waves as they were headed home.

“We saw them trying to reach the coast while clinging to several small bancas beside the huge and damaged fishing vessel,” said Moamar Manalao, village chief of Barangay Nalkan of Datu Blah Sinsuat, Maguindanao.

Manalao led his men in rescuing the beleaguered fishermen reach the shore.

The 18 fishermen are all from nearby Lebak town.

Quoting the survivors, Manalao said the vessel was heading toward Lebak from Sultan Naga Dimaporo in Lanao del Sur when huge waves battered them as they were off the coast of Datu Blah Sinsuat, destroying their vessel, MV Sea Target. 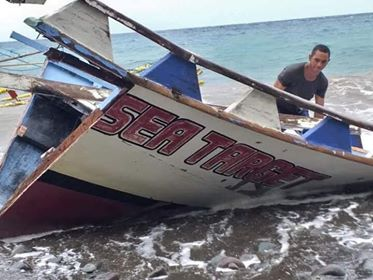 Strong winds also forced the vessel to tilt to its side, Manalao added.

Most of the crew jumped to the sea and later boarded two small emergency boats to stay afloat until residents of Barangay Nalkan came to their rescue.

The waves were as high as a two-story building, Manalao quoted the Lebak fishermen.

Manalao fed and clothed the fishermen, and had them transported by motorcycles to Lebak town.