MANILA, Philippines — A senior citizen was severely injured when he was struck by a Philippine National Railways (PNR) train at a railroad crossing in Makati City on Thursday morning. 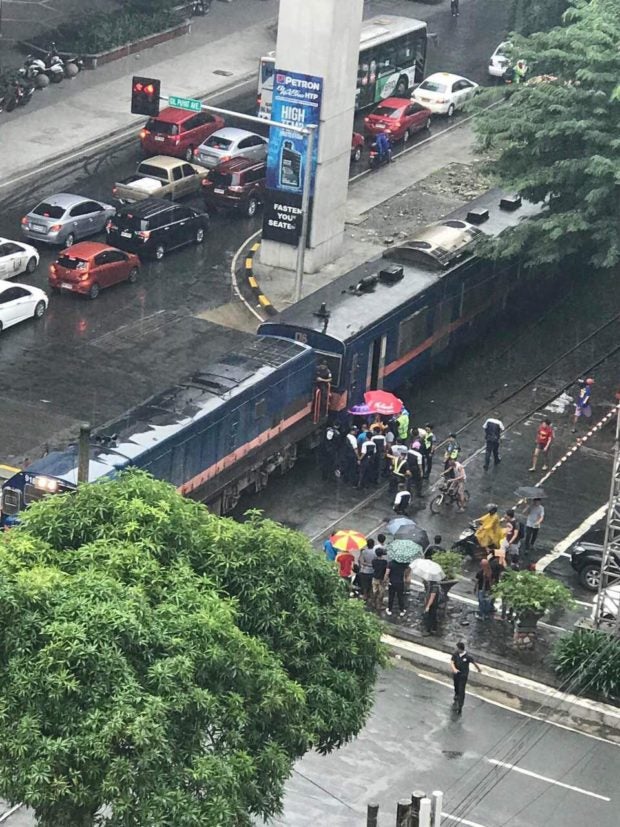 Rescuers and kibitzers gather around a PNR train which hit and injured a senior citizen at the Osmena Highway – Buendia intersection in Makati City Thursday morning. (Contributed photo)

The Makati Police Community Precinct 2 said that Macario Ylarde Ebreo, 68, was crossing the railroad tracks at the intersection of Osmeña Highway and Sen. Gil J. Puyat Avenue (Buendia) in Barangay San Antonio when he was hit by the train at around 10:15 a.m.

Ebreo was brought to the Makati Medical Center for treatment.

According to PNR’s accident report, the train came from Tutuban and was southbound towards Alabang when it sideswiped Ebreo around 9:57 a.m. It also said that the victim obtained head injury from the accident

“As per Train Driver, Mr. Ebreo tried to cross the railroad tracks unmindful of the incoming train,” PNR’s accident report showed. The report did not name the train driver.

The incident, PNR said, obstructed both tracks of Malugay Crossing and Buendia Crossing but that no trip delays or cancellation followed.

PNR said the train that figured in the accident was removed from the site at 11:53 a.m. /gsg/kga