Water, temperature right for life at another star’s planet

CAPE CANAVERAL, Fla.  – In a tantalizing first, scientists have discovered water at a planet outside our solar system that has temperatures suitable for life. 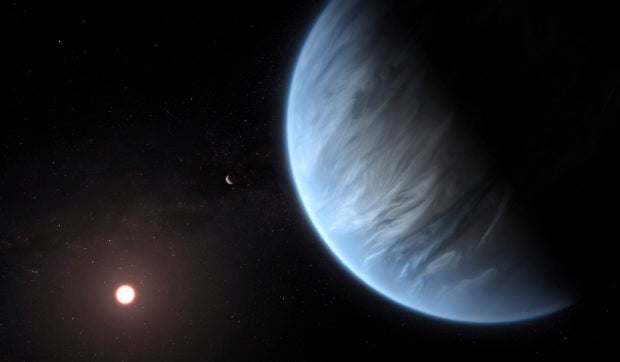 This artist’s rendering provided by University College London Centre for Space Exochemistry Data researchers shows Exoplanet K2-18b, foreground, its host star and an accompanying planet in this system. On Wednesday, the scientists announced they discovered water on the planet outside our solar system that has temperatures suitable for life. (M. Kornmesser/ESA/Hubble via AP)

Two research groups announced this week that they’ve found water vapor in the atmosphere of a planet 110 light-years away in the constellation Leo. This so-called Super Earth is just the right distance from its star to conceivably harbor life.

It’s the only exoplanet known so far to have both water and temperatures needed for life, the University College London team reported in the journal Nature Astronomy on Wednesday. But lead author Angelos Tsiaras stressed, “This is definitely not a second Earth.”

Its star and atmosphere are so different than ours, “Earth-like conditions are not possible,” Tsiaras told reporters. “The only question that we’re trying to ask here, and we’re pushing forward, is the question of habitability.”

A Canadian-led team announced similar findings Tuesday. In a paper just submitted to the Astronomical Journal for publication, these scientists suggest it might even be raining there.

“This represents the biggest step yet taken toward our ultimate goal of finding life on other planets, of proving that we are not alone,” the study’s lead astronomer, Bjorn Benneke of the University of Montreal, said in a statement.

Discovered in 2015, the planet known as K2-18b is twice the size of Earth with eight times the mass. While it’s thought to be rocky, no one knows if water’s flowing on the surface. Its star, a red dwarf, is considerably smaller and cooler than our sun, a yellow dwarf, and its atmosphere is also different than ours.

The results are doubly exciting, Tsiaras noted, given this is not only the first Super Earth with water detected in its atmosphere but the planet also resides within the habitable zone of its star.

The research teams used archived data from the Hubble Space Telescope and other spacecraft to analyze the planet’s atmosphere. Further observations are needed to determine whether the planet is indeed a true water world, using next-generation observatories like NASA’s James Webb Space Telescope and the European Space Agency’s Ariel, both due to launch in the 2020s.

Future telescopes on Earth and in space should help uncover more Super Earths orbiting red dwarf stars — believed to be the most common planets and stars in our Milky Way galaxy. Super Earths are defined as having a mass greater than Earth but less than gas giants like Uranus and Neptune; more than 1,260 have been confirmed to date.

While water already has been identified in the atmospheres of hot gas giants circling other stars, the latest findings represent the first detection of water vapor in the atmosphere of another type of exoplanet, Tsiaras said.

A NASA tally currently lists more than 4,000 confirmed exoplanets and another 4,000 potential candidates. Most have been detected using the transit method, where telescopes watch for a slight, fleeting dimming of a star’s light as a planet passes in the field of view.

For now, scientists know K2-18b takes 33 days to orbit its star, so one year there is one month here. At this distance, temperatures range from minus-100 degrees to 116 degrees Fahrenheit (minus 73 degrees to 47 degrees Celsius.)

The star, glowing red in the day sky, is believed to bombard the planet with radiation harsh enough to quickly inflict any human visitors with cancer, although “life there may have evolved differently” in order to survive, noted the London team’s Ingo Waldmann. A sister planet, meanwhile, orbits closer to the star and is likely too hot to be in the habitable zone.

The cloud cover isn’t too thick on K2-18b, otherwise it would have obscured the water vapor in the atmosphere, according to the scientists.

The surface, meanwhile, could be wet or dry. The London data suggest water vapor makes up anywhere between 0.01% and 50% of the atmosphere — “quite a big range,” Waldmann acknowledged. Either way, given the planet’s mass, it would be difficult to walk on the surface.

“Maybe not quite your vacation destination just yet,” Waldmann joked. /gsg