Sogie or not Sogie? Panelo clarifies what’s urgent for Duterte 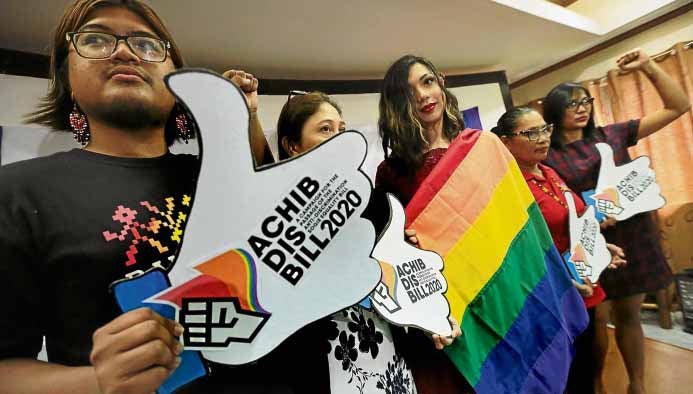 ‘SPECIAL PRIVILEGE’ The LGBTQ+ group Bahaghari launches its campaign on Wednesday
pushing for the enactment of the Sogie bill. —GRIG C.MONTEGRANDE

His spokesperson, however, walked back the President’s remarks in an interview the next day.

Asked by reporters on Tuesday night if he would certify the Sogie bill as urgent, the President said: “Yes, whatever would make the mechanisms of … what would make them happy.”

Last month, the President met with LGBTQ+ advocates in Malacañang, including transgender Gretchen Diez, who made headlines after she was barred from using a female restroom at a Quezon City mall.

There are several versions of the Sogie bill, which would  prohibit the discrimination against LGBTQs. The four bills posted on the Senate’s website are pending on the committee on women, children, family relations and gender equality.

In the House, the Makabayan bloc has refiled its version of the bill, while Bataan Rep. Geraldine Roman filed her own version.

Speaking to Palace reporters on Tuesday night, the President pointed out that his hometown of Davao City passed an antidiscrimination ordinance when he was the mayor.

“I had one in Davao,” he said, referring to a 2012 Davao City ordinance that penalizes acts of discrimination based on sex, gender identity, sexual orientation, race, color, descent, national or ethnic origin, religious affiliation or belief, and health status.

He recalled that Muslims from Cotabato and Marawi were not being sold properties in subdivisions in Davao City.

“I said, ‘If you do not allow everybody to live there… They are Filipinos too. Humans. You might not like them but they are Filipinos,” the President said. “I do not want it in a… I have an antidiscrimination for gays, disabled. I was first to come up with it.”

But according to presidential spokesperson Salvador Panelo, the President had a more “general” antidiscrimination bill in mind.

“Actually what he meant was an antidiscrimination law or bill, not the Sogie bill. Not that one,” Panelo said in an interview with CNN Philippines.

Panelo added that “[the President] is a lawyer so he will not certify a bill that will appear to be or is a class legislation…  It must be general. That’s what the President doesn’t like, when you discriminate against a particular class.”

Panelo said the President wanted an “enlarged version” of the Sogie bill that would protect other minority classes besides LGBTQs.

“In fact, he said, ‘I have that, we have that in Davao.’ So he was really, specifically referring to that antidiscrimination law in Davao,” Panelo said.

“Why would they [the LGBTQ+ community] be disappointed? If it’s an antidiscrimination bill, which is in an enlarged version of whatever bill you have in mind, they will also be included.”

Senate President Vicente Sotto III, in an interview with reporters, said a broader antidiscrimination bill, one not focused solely on members of the LGBTQ+, has a chance of hurdling the Senate.

“It is just like putting together all the other bills that prohibit all kinds of discrimination. This has a better chance instead of something centered on the LGBT. It becomes class legislation, automatically, if it’s only centered on one sector,” Sotto said.

For Sen. Risa Hontiveros, one of the authors of the Sogie bills in the Senate, the remarks by Mr. Duterte and his spokesperson showed “Malacañang’s policy confusion regarding how to address discrimination against the LGBT community.”

“While an antidiscrimination measure is welcome, the Sogie Equality Bill remains the best policy tool to protect members of the LGBT community from discrimination, harassment, and even violence,” Hontiveros also said.

“This protective mechanism is unique to LGBTs who experience not only discrimination but also stigma. We hope that President Duterte will seriously consider these points,” she added.

Also on Wednesday, Catholic priest Jerome Secillano said the bill “gives premium on the so-called ‘rights’ of the [LGBTQ+] community that can potentially harm the natural order of things in our society and wreak havoc in our more established societal norms and culture.”

Secillano, executive secretary of the Permanent Committee on Public Affairs of the Catholic Bishops’ Conference of the Philippines (CBCP), also said it was not correct to say that the LGBTQs was claiming a “right.”

“It is more accurate to say that they are requesting for a special privilege, a favor that can either be given or rejected depending on whether it can be good for society as a whole or destroy the same in the process,” the CBCP official said.

At the launching on Wednesday of a campaign to push for the Sogie bill, Rey Valmores Salinas of the group Bahaghari said “the LGBT are only tolerated but not really accepted in the Philippines, because we still do not have a law that protects our rights.”

“LGBT rights are human rights and human rights should not be compromised. Where has compromise taken us?” Salinas added.  —With reports from Leila B. Salaverria, Tina G. Santos, DJ Yap and Mariejo S. Ramos