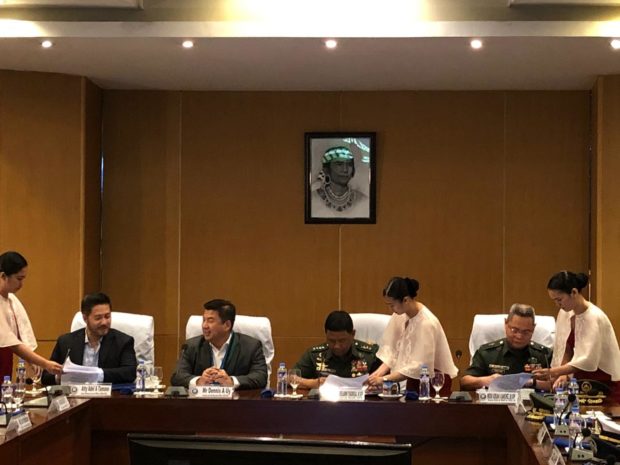 MANILA, Philippines — The Armed Forces of the Philippines (AFP) has entered into an agreement that would allow the country’s third major telecommunications player, which is partly backed by state-owned China Telecom, to build its communication facilities in military camps and installations.

Uy is also known for his close ties with President Rodrigo Duterte.

Under the agreement, AFP will determine specific locations where Dito can build its communication sites “without undermining the operations of affected units.”

Also part of the deal is for Dito to provide the equipment and labor, as well as the payment of taxes, permits, licenses, and other charges.

“Payment will be made by providing CEIS equipment, upgrade, services, and training to the AFP equivalent to the monetary value of the lease subject to inflation,” the AFP said.

It also includes a guarantee from Dito that “the devices, equipment, and/or structures installed at the site provided by the AFP shall not be used to obtain classified information.”

While 40 percent of the consortium is owned by China Telecom, Tamano said that Dito is a Filipino company.

He also allayed fears that the country’s cyber and national security would be compromised.

“As a Filipino company, cybersecurity in terms of national security, we will always keep this paramount and we will never allow and country to violate our national and cybersecurity,” he said.

Some government officials and analysts have earlier raised concerns over the Chinese stake in the consortium, amid Beijing’s use of cyber surveillance in other countries.

Tamano explained that in the telecommunication business, one of the most critical parts is “site acquisition,” which makes the partnership with AFP important.

“One of the most tedious part is getting 26 to 30 permits in license in order to put up a tower. With the AFP, that is very much simplified,” he said.

“This partnership gives Mislatel (Dito) a fair chance to compete with the other networks,” he said.

The telco company aims to cover 84 percent of the Philippine population in the next five years.

Tamano said they are also partnering with other government agencies for the rollout, which is slated by late 2020. /kga