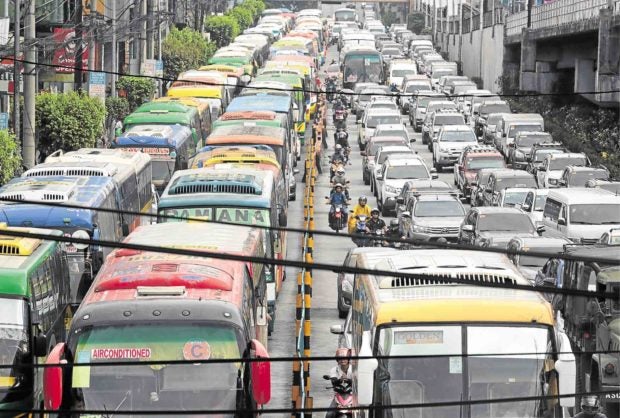 Traffic builds up on Edsa as buses are restricted to the yellow lane. (File photo by GRIG C. MONTEGRANDE / Philippine Daily Inquirer)

The President said Poe had been suspicious that the money for traffic-related projects could be lost to corruption.

“Pero ‘yang Edsa, hinayaan ko talaga. There was this one lady senator who said na: ‘No, no, ma-corrupt ‘yan.’ Hindi pa nga nag-umpisa ng project, nagsasalita na,” the President said during the oath-taking of the League of Vice Governors of the Philippines in Malacañang.

The President said he intentionally left Edsa in its current state after Congress failed to grant him emergency powers, which he believes will ease traffic congestion.

Poe, as chair of the Senate Committee on Public Services, has held hearings on the proposal to grant the President special emergency powers to address transportation and congestion problems in the country.

Several bills were filed in the Senate and House of Representatives in the previous Congress seeking emergency powers for the President. The House approved the bill, but the Senate version did not progress.

The Agence France-Presse earlier reported that patients die on their way to the hospital because ambulances were stuck in Metro Manila traffic.

According to Malacañang, this should prod lawmakers to consider passing the bill granting the President emergency powers.

But the President said he was no longer keen on asking for emergency powers as his remaining years in office would be insufficient to solve traffic gridlock in Metro Manila.