Even for Trump, it's been a busy stretch of media attacks | Inquirer News
Close
menu
search

Even for Trump, it’s been a busy stretch of media attacks 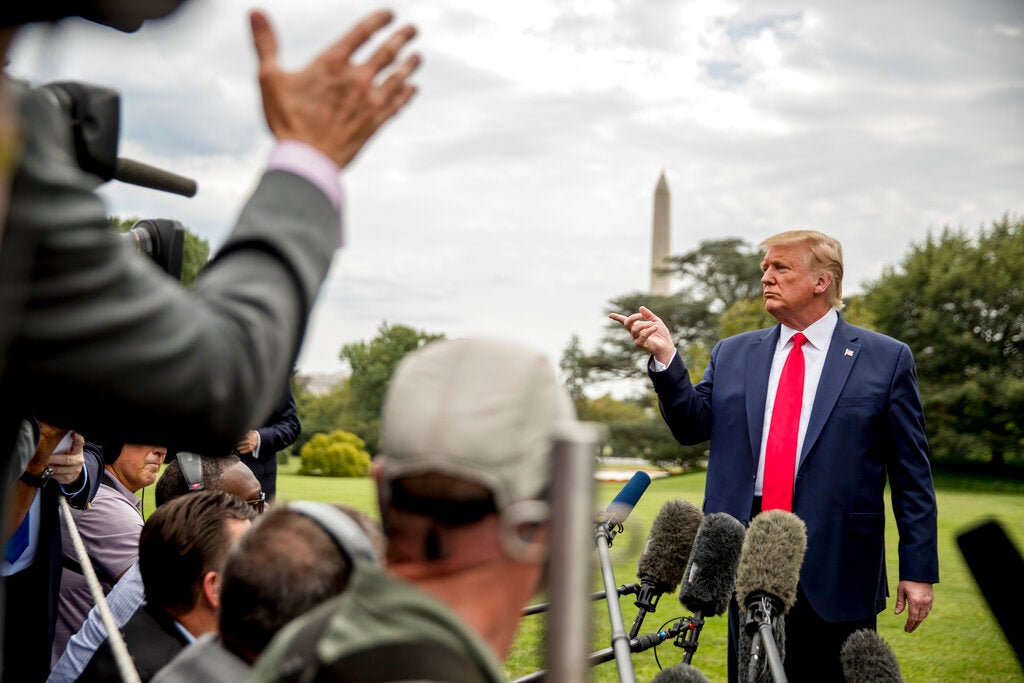 President Donald Trump takes a question from a reporter on the South Lawn of the White House in Washington, Monday, Sept. 9, 2019, before boarding Marine One for a short trip to Andrews Air Force Base, Md., and then on to North Carolina. (AP)

NEW YORK — Even for a president who has made attacks on the media routine, the past few days have seemed turbo-charged.

Within five days, President Donald Trump has tweeted a video of the CNN logo bursting into flames, asserted that two Washington Post reporters should be barred from the White House and got into a tweetstorm with singer John Legend and his wife, model Chrissy Teigen after an MSNBC program on criminal justice reform.

He also summoned Fox News’ John Roberts to the Oval Office to complain about coverage of the Sharpie-expanded Hurricane Dorian forecast map. He called a reporter for The New York Times an “Obama toady.”

A Washington Post piece about Trump’s “lost summer” and the dragged-out flap over the president’s claim about Alabama’s vulnerability to the hurricane were the two stories that seem to leave him particularly irked.

News organizations targeted by Trump either struck back or ignored him.

“I’m reluctant to declare one moment or another a turning point on this hairpin road we’ve traveled these past few years,” said Nancy Gibbs, faculty director of Harvard University’s Shorenstein Center on Media, Politics and Public Policy. “But when we are arguing about the weather, we are in a new place.”

Trump’s tweet of the flaming CNN logo came after the Alabama story. He tweeted over the weekend that he would like to stop talking about the story, but the media kept bringing it up. “They always have to have the last word,” he said.

Trump and his aides offered new evidence to buttress his claim that early forecasts said there was a chance Dorian could brush Alabama. He called in Fox’s Roberts last Thursday to the Oval Office to show similar material. That was also the same day Fox anchor Shepard Smith delivered a blistering fact check on some of the president’s claims. Fox would not comment on published reports that the president also wanted to vent to Roberts about Smith.

The Post story, published a week ago, suggested Trump had wasted time over the summer with self-inflicted controversies and squandered opportunities. In response, White House Press Secretary Stephanie Grisham and a press aide, Hogan Gidley, wrote an op-ed titled “The Washington Post’s lost summer” that was published in the Washington Examiner on Thursday. They said the newspaper had ignored many of Trump’s “well-documented victories.”

For example, they wrote that the Post did not write about Trump’s efforts to tighten the southern border and ease the elimination of student debt for wounded veterans. But the Post later provided links to its coverage of those stories, leading the website Mediaite to write, “White House press secretaries publish op-ed claiming Washington Post didn’t cover stories the paper actually did cover.”

Over the weekend, Trump tweeted that the reporters who wrote the Post piece, Philip Rucker and Ashley Parker, should not be allowed on the White House grounds because their reporting “is so DISGUSTING & FAKE.”

The Post’s executive editor, Martin Baron, said the paper stood behind its reporters.

“The president’s statement fits into a pattern of seeking to denigrate and intimidate the press,” Baron said. “It’s unwarranted and dangerous, and represents a threat to a free press in this country.”

Harvard’s Gibbs said it’s hard not to conclude that the White House wants to destroy faith in truth and facts, and replace it with the theology of loyalty, where a politician’s supporters are expected to believe whatever he says, however outlandish.

“That is why we can’t separate the crises of trust and truth,” she said. “The less we trust institutions, whether government agencies or the media or business or civil society groups, the more likely we are to believe junk news and partisan garbage. And that’s a danger to all of us.”

Trump supporters cheered a president who is taking on the press directly. “The media has never suffered such body blows before from a Republican, and it is truly driving them insane,” wrote William Marshall in a column on the conservative website Townhall.com.

Trump kept up attacks on CNN, a favorite target, through the weekend and into Monday. He said CNN’s international division “spews bad information and fake news all over the globe.” He suggested the company is losing money, which CNN disputed. And he cheered a report that activist hedge fund manager Elliott Management is investing in AT&T, expressing the wish it would put a stop to “fake news.”

Trump also complained that NBC News, in a documentary and a town hall meeting about prison reform that aired Sunday night on MSNBC, gave no credit to him and other Republicans for their role in passing legislation that reduces some sentences for people serving time in federal prisons. The Lester Holt-narrated documentary aired a 15-second clip of Trump’s bill-signing ceremony, and there was a short discussion of the legislation at the town hall meeting.

Trump’s name wasn’t mentioned in the town hall discussion, however.

Legend was a participant in the town hall meeting, leading Trump to bash him and Teigen on Monday.