Crowds of children bustle around chessboards in Lagos, Nigeria figuring out their next moves as part of a project aimed at bringing hope in one of the city’s impoverished slums.

Dozens of matches are played simultaneously as participants as young as three master a game often considered out of reach for the masses in Africa’s most populous country. 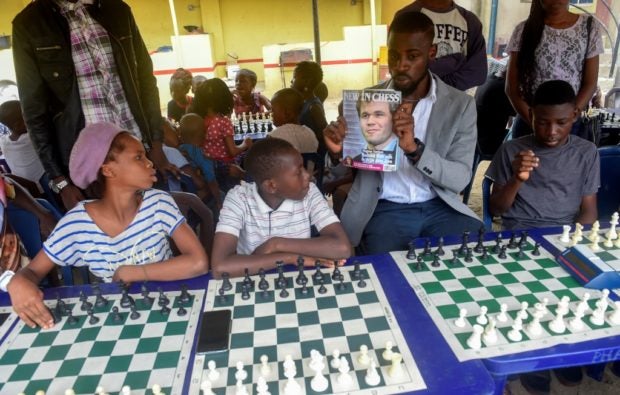 Chess consultant and player Tunde Onakoya (C) displays a copy of a chess magazine showing a photograph of world Chess champion Magnus Carlson during a tutorial with children at Ogolonto in Ikorodu district of Lagos on Aug. 17, 2019. Image: AFP/Pius Utomi Ekpei

“Sometimes you win, sometimes you lose,” 24-year-old teacher Tunde Onakoya tells his young charges after getting their attention. “But it’s how you respond that makes you a champion. Don’t get down when you lose, don’t feel like you can’t do it, just concentrate and do your best.”

Seasoned player Onakoya started the Chess in Slums project last September in the sprawling neighborhood of Ikorodu, a place where residents often feel cut off from the bustle and business of the vibrant megacity around it.

The goal of the club is to provide a space to play and learn the game for the young inhabitants of the slum, many of whom are not in school and work to support their families.

Held beneath a makeshift tent in the courtyard of a local bar, in less than a year the program has already drawn an enthusiastic following.

As elderly men sip beer and watch football nearby, a dozen volunteers divide the pupils into groups.

While some turn their figures into battling action heroes, most are focused and intent on winning.

The youngest children sing rhymes about chess to help them master the rules, as the older ones settle down into intense games.

They use mobile phone applications to time their moves and record the matches in notepads to review their mistakes and successes later.

“I want to be a grandmaster,” one of the children tells Agence France-Presse (AFP), laughing.

‘Food for your brain’

Chess — a board game famous for its reliance on strategy — has a tiny but avid following in Nigeria.

The West African nation ranks 88th out of 186 countries, according to the International Chess Federation’s rating of top players across the globe, but still does not have any grandmasters.

Other board games are more popular.

Nigeria is a superpower in Scrabble, winning multiple championships and boasting 29 of the top 100 players in the world, more than any other country.

Onakoya says that chess has lagged behind in part due to an image problem.

“There’s this perception of it as being a really difficult game, not as accessible, like for people of a different class,” he says.

Onakoya took chess in primary school and works with private schools as a consultant to add it to their curricula.

“I believe in the game because it helps your cognition, your creativity, your focus. It’s like food for your brain,” he said.

Last year, he started the club in Ikorodu specifically to reach disadvantaged children.

“Ikorodu is the kind of place where there’s a lot of troubles and poverty. It is a tough place to get to, if you tell someone to come to Ikorodu they will laugh,” he said. “I felt it would be powerful to help children here because many of them are really talented.”

“If they could master a game that people wouldn’t expect them to even know,” he added. “It could really show them their potential and give them confidence.”

For Jamiu Ninilowo, 14, taking part has also been transformative.

The skinny boy worked as a mechanic fixing cars at a garage in Ikorodu instead of attending school.

He had to earn money for his family after his mother’s leg was mangled in an accident as she picked scrap at a local refuse site to sell for a meager profit.

In February, Ninilowo joined the club and is now its best player.

After he won a tournament in April, an impressed donor partnered with Chess in Slums to pay for his secondary education.

“Chess is helping me to be a mechanical engineer by sending me to school,” he tells AFP, proudly wearing the medal he won.

The attention that the project has generated has helped shine a spotlight on more of these marginalized children.

Videos of the budding chess masters shared on Instagram also showcase some of their other talents that have often been overlooked in the struggle to survive.

One 11-year-old boy even got a mentorship from a leading Nigerian architect after he was seen building models out of cardboard.

“At first it was about teaching the kids a game that can impact the way they think and boost their confidence, but actually it’s become much more. It’s become a gateway to other opportunities,” Onakoya said. “It is helping us show them that their lives can go far beyond Ikorodu.” RGA/JB

Read Next
Poe seeks probe into attack at Abante printing plant
EDITORS' PICK
IATF to LGUs: Issue ordinances vs attacks on frontliners, COVID-19 patients
10 Filipinos positive for COVID-19 in UK, 7 in Ireland — envoy
Nograles: Cabinet members to donate 75% of monthly salary to aid COVID-19 fight
Diokno to Duterte: OK to make fun of buck tooth, but focus on people’s needs first
Robredo spox thanks Duterte for defending VP’s efforts vs COVID-19
Quick chat with Nicole Andersson: ‘You really don’t need much to be happy’
MOST READ
Gov’t mulling quarantine period extension of 15-20 more days
Sotto on Isko Moreno’s call: We do our job without the media following our every move
ADB warns PH against prolonged lockdown
Duterte fires PACC’s Luna for urging NBI to probe Robredo
Don't miss out on the latest news and information.