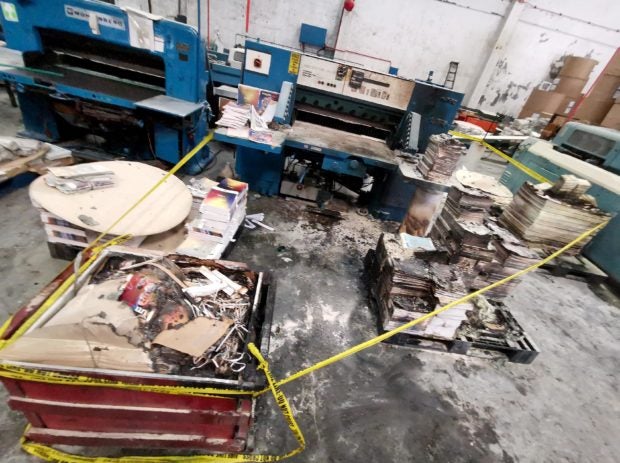 This photo shows the damage caused by the fire that struck Abante News Group’s printing plant in Parañaque City in the wee hours of Monday, Sept. 9, 2019. Four hooded men broke into the printing plant between 1 a.m. and 2 a.m., poured gasoline to printing machines and supplies before setting them on fire, according to Abante managing editor Fernando Jadulco. (Photo from Abante)

MANILA, Philippines — “Let’s not be afraid to report the truth and for the country,” Sen. Grace Poe said on Monday as she called for an investigation into the attack in Abante News group’s printing plant in Parañaque City.

Poe, who served in the 17th Congress as chair of the Senate Committee on Public Information and Mass Media, said the incident sought to strike fear into journalists.

“This is clearly intimidation, not only of Abante but of all journalists who are only reporting information and uncovering the corruption and the wrongdoing of various people, including those who are corrupt in government,” Poe said in a statement written in Filipino.

Poe issued the statement hours after four hooded men broke into the Abante printing plant between 1 a.m. and 2 a.m. on Monday and poured gasoline on printing machines and supplies before setting them on fire.

“We are calling for a thorough investigation of this incident so we could hold those behind it responsible,” she said. “I hope the employees who were hurt in the incident would also get assistance.”

In a statement issued earlier, Abante managing editor Fernando Jadulco said: “The management and staff of Abante-Tonite condemn this dastardly attack, the first violent act against our group and its facilities since 1987.”

“We will not be cowed by this attempt to strike fear into our reporters, editors and staff. Our commitment to hard-hitting journalism remains unshaken,” he added.