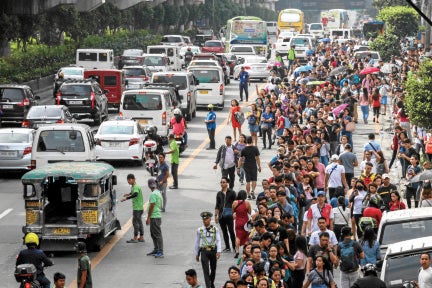 MANILA, Philippines — Trains in Metro Manila, it seems, have a way of turning the meek into hardened survivors.

Claudine, 25, for example, has gotten used to being crushed by the weight of heaving bodies — being “beaten by unknown arms and elbows, getting my shoes removed from my feet and having my personal space violated for an hour.”

It’s a good day if she gets from her home in Quezon City to Santa Ana, Manila, a distance of 12 kilometers, within two hours.

But while the Light Rail Transit 1 helps with faster commute, she says, she constantly “worries (about) how I could get back home in one piece.”

Imagine, then, spending four hours on average daily on this soul-crushing activity, as a commuters’ group now finds.

Komyut, which belongs to the Move Move Move coalition of transport and commuter organizations, found that working Filipinos spend an average of two hours just getting to their offices every day, and two hours to get back home.

Of this, they waste an entire hour just waiting in line for their ride.

The survey’s results, which were shown to the Inquirer, illustrated the near-debilitating situation for the average commuter, for whom productivity and precious time are lost every day to the lack of predictability and efficiency of public transport.

“It’s a summary of what commuting is like in Metro Manila,” said Darlene Motil of Komyut, “something our policymakers don’t really understand.”

Around 400 commuters participated in the survey, which asked them to share their usual routes, travel time and costs, and comments on their experiences.

Komyut posted the form for various commuter groups on Facebook and then culled the raw data to verify their answers. Anybody with access to the survey can answer.

Komyut managed to get enough respondents to get a sizable group that cut through several demographics and cities of origin, with Metro Manila, Cavite and Bulacan well represented, Motil said.

Fifty-nine percent of the respondents were female and fell into the 18-35 demographic.

Motil said what was clearest from the survey was that Filipinos were spending an “absurd time” on the road: waiting for buses, trains and jeepneys, then crawling through traffic.

“Even just two hours on the road is really, really absurd,” she said. “Time is the most valuable thing in the world and most of us spend four hours wasting away in a public utility vehicle.”

An efficient commute must follow the 10-10-10-3 principle, according to Motil.

But commuting in Manila barely meets those standards. It’s worse for people coming in from Mega Manila (Cavite, Bulacan and Laguna provinces), who contribute to the metropolis’ economy but are hit the hardest by recent traffic policies. 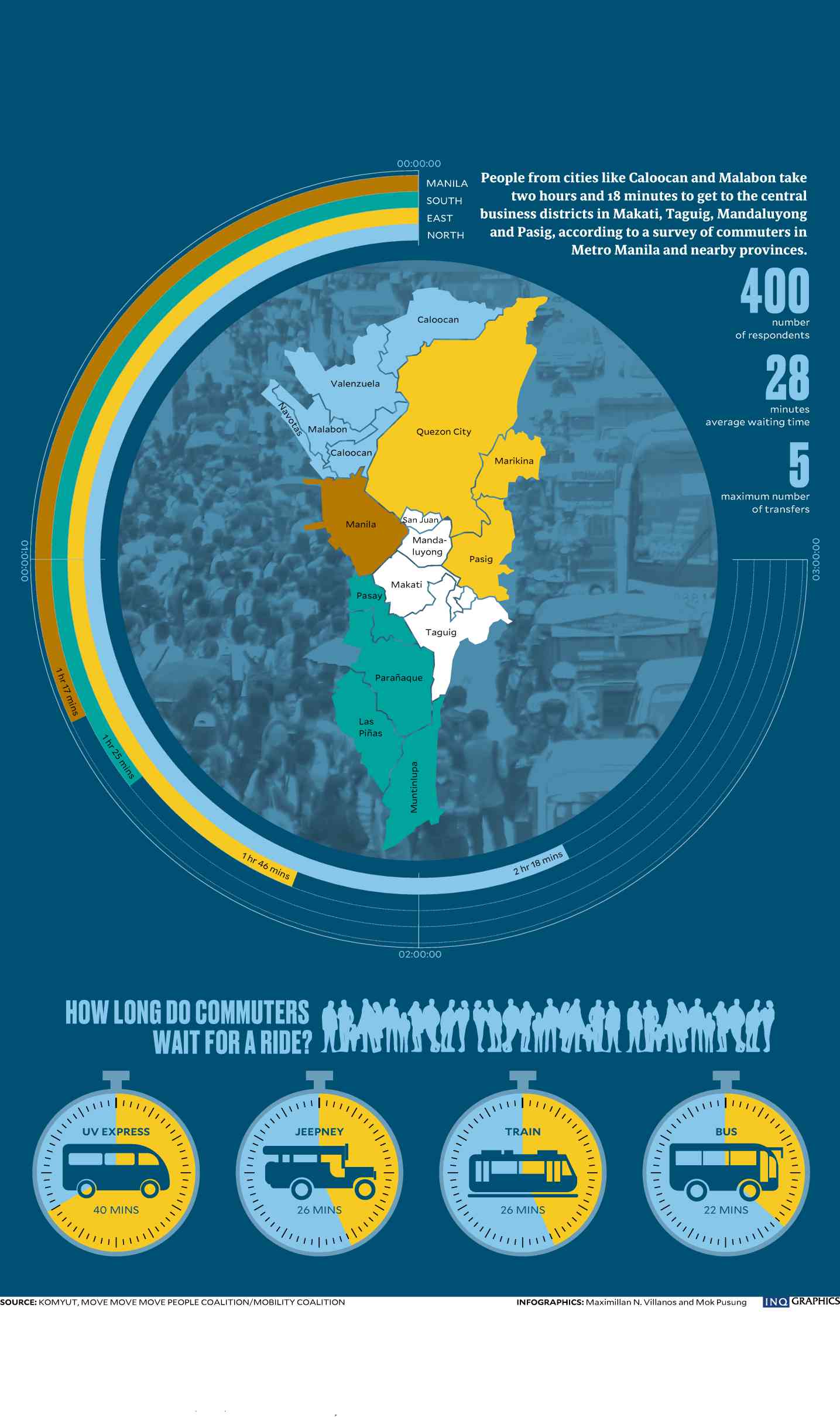 But when the Metropolitan Manila Development Authority banned provincial buses from loading and unloading along Edsa, her commute time doubled.

She had to wake up at 4:30 a.m. just to get to her 8-to-5 job at the Philippine Statistics Authority office in Eton Centris on Edsa.

“Sometimes you can’t help but feel helpless,” she said. “It shouldn’t be normal to have to change your life like that because of traffic. [Then] you see so many cars passing through Edsa while commuters like us are cramped inside buses.”

While the survey did not measure the kilometers traveled in under an hour, it did show that the average commuter waits for 28 minutes, one-way, for a ride.

Waiting time varies wildly depending on the mode of transport. Train riders, for example, wait an average of 26 minutes in the stations despite the three-to-four-minute average train headway.

For bus riders, it could take 22 minutes; for UV Express riders, 40 or four times the acceptable time.

While the survey showed that most commuters transferred trips at least twice on average to get to their destinations, some commuters, especially those coming in from Mega Manila, take four to five.

But one female respondent in particular said she transferred trips at least six times—a combination of tricycle, bus and jeepney rides—from her home in San Pedro, Laguna, to her work on Katipunan Road, Quezon City.

What the numbers fail to capture, however, are the indignities suffered by the commuter.

A UV Express ride from Antipolo to Bonifacio Global City, for example, means enduring humid air conditioning, little to no leg room and a driver who often disregards the rules of the road, says Nico Pascual, 29.

Riding an MRT train, meanwhile, often means being anxious about whether the train would break down, said Alli Laxamana, 23.

In all, public transport is unreliable, unsafe and unpredictable for most commuters, who nevertheless endure these conditions for lack of options, Motil said.

“Part of our survey asked our respondents: ‘If you have your own car, would you ride public transport?”’ she said. “Many answered ‘no’ and in that alone you would see that many people don’t want to experience the discomfort of commute.”

It’s not surprising, therefore, that over half of the respondents said they felt “unhappy” about their commute.

But more worrisome for Motil was that a third said they felt “neutral” about their experiences.

Does this mean, she asks, that people have become apathetic?

Motil, herself a commuter, often waits for up to 40 minutes just to get on a train. But while the wait was excruciating, she noted that people were “just looking at their phones, not even bothering to question if they are really supposed to wait that long.”

If people are indifferent to their commute, she said, “Can we really hope to resolve this issue? If they start to look at this like it’s merely a way of life, they might stop questioning their situation.”

Motil said her group would submit the results of the survey to the office of Sen. Grace Poe, chair of the Senate committee on public services, to help policymakers understand the plight of the ordinary commuter.

Poe is coauthor of a bill that, if passed, would enshrine the rights of commuters to a dignified commute.