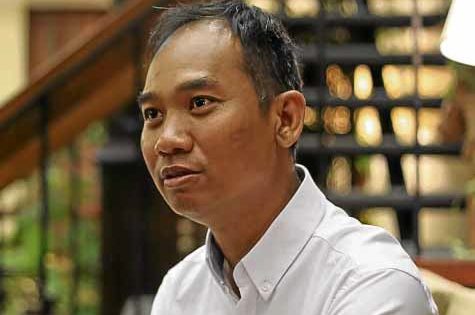 MANILA, Philippines — Myanmar journalist Ko Swe Win has managed to thrive in a high-risk profession despite, or perhaps because of, his experience with repression and the political tensions in his home country.

In his current capacity as editor in chief of independent news service Myanmar Now, Ko Swe Win has turned Myanmar’s attention to stories of keen social relevance and human interest.

His two-year investigation of the enslavement of 10,000 prisoners in Myanmar’s rock quarries led to prison reforms as initiated by parliament. It was also through his writing that he managed to have two adolescent maids rescued from abuse and slavery in Yangon’s Kyauktada Township.

But Ko Swe Win, one of this year’s recipients of the Ramon Magsaysay Award — regarded as Asia’s highest honor — was never fond of the spotlight.

He sat through a series of interviews in Manila with that smile and air of modesty that matched his white polo and denim pants—a low-key ensemble for a 41-year-old man who became a voice for impactful journalism at a time of political turbulence.

“Our country is a beautiful country, but we continue to have armed clashes that resulted in many kinds of human rights violations, such as the recruitment of child soldiers and the use of prisoners in the front-line areas [of conflict],” Ko Swe Win told the Inquirer in an interview at the Ramon Magsaysay Center Asian Library on Thursday.

These issues were deeply personal for the journalist, who was imprisoned in 1998 for challenging military rule.

That tumultuous period meant seven long years in jail for Ko Swe Win, but upon his release he began to further develop his passion for journalism, earning a master’s degree in Hong Kong in 2009. He then worked for three years in a magazine in Thailand.

Distance made him realize he had to return to Yangon and confront his own milieu.

In 2012, conflict erupted between Buddhists and Rohingya Muslims in Myanmar’s northern Rakhine State.

“For a journalist, I think it’s important to be able to see things with your own eyes. We have to live the history; it’s not enough to read the history,” Ko Swe Win said.

“If somebody, or a community, experiences misery, you also have to share their history to some extent. Experiential understanding is very important for our work,” he said.

In a country with over 48 million Buddhists, or roughly 90 percent of the population, his principle of shared suffering is also at the core of their faith.

“In our country, religion plays a strong role. We have about 400,000 soldiers and about the same number of Buddhist monks. In that context, we have a difficult political transition. There are those who don’t want to see our democracy to progress—the minority elite, those in power—because of personal interests,” he said.

In 2017, Ko Swe Win figured in a legal battle with influential Buddhist monk Ashin Wirathu, whom he criticized for encouraging “hate speech” and publicly commending the killer of a Muslim human rights activist. He was sued for defamation and was briefly detained, before the judge finally dropped the case on July 2 this year.

Indeed, as his career would attest to, journalism continues to be a dangerous profession in Myanmar. It is also “traumatic and painful,” Ko Swe Win said.

A case in point is the arrest of Reuters journalists Wa Lone and Kyaw Soe Oo in December 2017 for working on a story about the massacre of 10 Rohingya Muslims in Rakhine state.

“Journalism should be done with heart and mind for the sufferings of the people and for justice in society. Otherwise, what is its meaning?” Ko Swe Win said, adding that “silence is not an option.”

He believes that without political progress, the press cannot move forward. But such progress remains volatile in Myanmar, which continues to struggle between its authoritarian past and the transition to democracy.

“We are undergoing a very complex, very chaotic sociopolitical transition. This country has been left behind. It’s like a century behind,” said Ko Swe Win, citing the lack of proper laws and a stable judiciary system in Myanmar.

With “fabricated nationalism” and waves of propaganda complicating Myanmar’s political scene, he thinks journalists should report in a professional and truthful manner these complexities—“of how the chaos is taking place.”

He remains committed to exposing social issues even with “very limited press freedom,” such as violence against women and children, human trafficking and slavery.

“In many countries, democracy is the prerequisite of press freedom. The same is true in our country. But we don’t have that yet. Whatever limited press freedom we have, we will use this to put forth democratic changes,” he said.

The Ramon Magsaysay Foundation recognizes Ko Swe Win’s “undaunted commitment to practice independent, ethical and socially engaged journalism in Myanmar; his incorruptible sense of justice and unflinching pursuit of the truth in crucial but underreported issues.”

The foundation also cites his “resolute insistence that it is … the quality and force of media’s truth-telling that we can continuously protect human rights in the world.”

Yet despite the recognition, Ko Swe Win doesn’t want to call himself an advocate or an icon of anything.

“If you write a story properly, with truthful and verified information, the readers will automatically gain trust in your story,” he said.