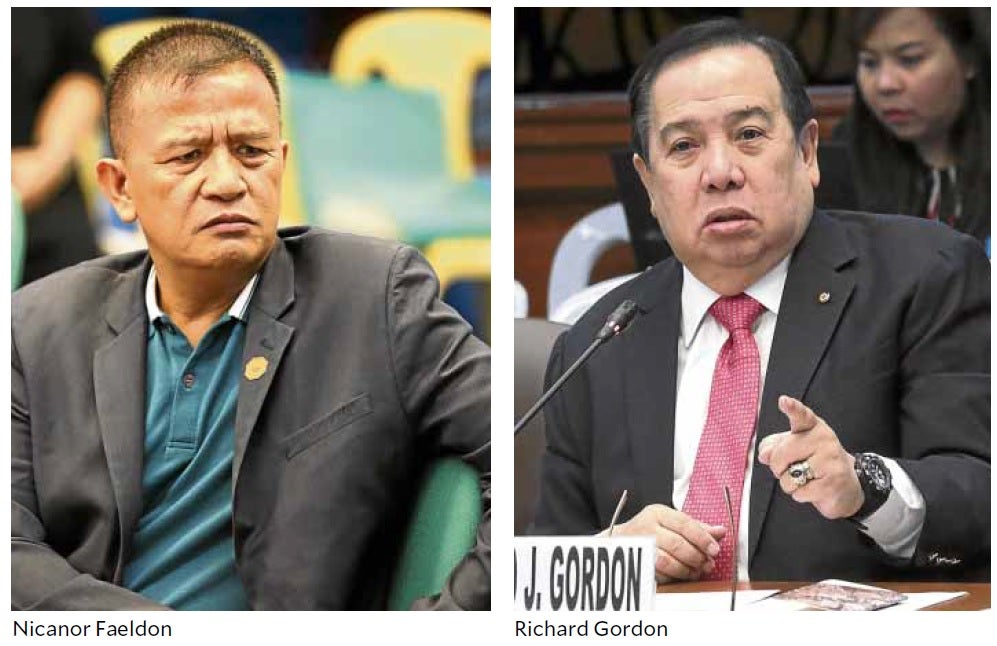 MANILA, Philippines — President Rodrigo Duterte should be careful about making remarks that tend to clear Nicanor Faeldon because the top prison official whom he fired last week may be liable for abuse of discretion, Sen. Richard Gordon said on Sunday.

Speaking in a radio interview, the chair of the Senate blue ribbon committee said the sacked Bureau of Corrections (BuCor) chief abused his discretion a number of times by releasing prisoners through a law that rewards good behavior.

Gordon urged the President to be extra careful in talking about Faeldon because the former BuCor chief might be “facing a case.”

The President fired Faeldon on Wednesday for disobeying his order to halt the release of prisoners on good conduct, specially those who had been convicted of heinous crimes.

But in a speech in Cebu City on Friday, the President said he still trusted Faeldon, as it was Faeldon, as head of the Bureau of Customs, who had tipped him off to cigarette smuggling that when foiled earned for the government P37 billion in revenue.

The President described Faeldon as an “upright man.”

Gordon said that, while this was the President’s perception of Faeldon, he still fired him from the BuCor.

“That speaks for itself,” Gordon said.

Malacañang pointed out that Faeldon was not fired for corruption but for disobeying the President’s order not to release heinous crime convicts.

“The allegation is that there is corruption [in New Bilibid Prison] so everybody might think he was being fired for that. It’s not like that,” presidential spokesperson Salvador Panelo said in a radio interview on Sunday.

“It appears that there is corruption at the bottom, but at the top, as far as the President is concerned, his (Faeldon’s) record is still clean,” he said.

Panelo, however, said that, while the President still trusted Faeldon, the former BuCor chief would still have to face investigation by the Ombudsman.

He said he did not believe the President’s remarks about Faeldon in Cebu City would tilt the Ombudsman investigation in the sacked official’s favor.

“If there is probable cause, then [the Ombudsman] will file cases against you,” Panelo said.

Faeldon was booted out amid a public outcry over the release of hundreds of prisoners, including convicted rapists, murderers and drug traffickers.

Among those planned to be released through Republic Act No. 10592 — the good conduct time allowance law — was Antonio Sanchez, a former mayor of Calauan, Laguna province, who was sentenced in 1995 to seven 40-year terms for the 1993 rape and murder of University of the Philippines Los Baños student Eileen Sarmenta and the murder of her friend Allan Gomez.

The controversy led to the exposure of a racket in New Bilibid Prison, the national penitentiary in Muntinlupa City, involving the sale of good conduct allowance to moneyed prisoners.

Last week, Yolanda Camilon, wife of a Bilibid inmate, told the Senate blue ribbon committee that she paid P50,000 for her husband’s early release. She said, however, that she had no dealings with Faeldon.

On Sunday, Gordon said Faeldon had “many abuses of discretion” even if he had not been tagged by Camilon.

“You can see Sanchez is able to walk freely without wearing a [prison] uniform. They should have been stricter [with] him,” Gordon said.

Gordon reiterated that it was unlikely that Sanchez’s family had no links to Faeldon, as the Sanchezes visited Bilibid 31 times in the past two years, even on holidays and in the wee hours of the night.

He also said it was possible that Sanchez or his family may have fallen victim to the good conduct racket in Bilibid.

“First, they went through lobbying and then the Board of Pardons and Parole. When that didn’t work, they tried to work it through the [good conduct law], but the law says they are excluded from its benefits,” Gordon said.

Asked if he thought Sanchez tried to regain freedom through the good conduct racket, Gordon replied: “I think so.”

Asked if he would urge the Sanchez family to testify on what they know about the racket, Gordon said the Senate blue ribbon committee still had to study the matter.

“I’m not encouraging them, but if they will talk about [it], that will definitely mean a big deal,” Gordon said.

The blue ribbon committee resumes hearings on the prison scandal on Monday, with Camilon returning to continue her testimony.

Inmates from other prisons

Gordon said he was looking into the possibility of bringing in inmates from different prisons in the country to testify on the racket.

Proposals have been filed in the Senate to amend RA 10592 to make clear which crimes are heinous so that prisoners convicted of such crimes cannot be released early even for good behavior.

Such a “severe punishment is as good as locking up a convict and throwing away the key,” Gullas said in a statement.

“[T]here are violent and dangerous criminals who should be incarcerated for the rest of their natural lives to satisfy the demands of justice and to protect the general public. Thus the option of life sentence without parole,” he said.

Out of the more than 2,000 “prematurely released” heinous crime convicts, 76 had heeded Mr. Duterte’s order to surrender and turned themselves in to authorities as of Saturday night.

The BuCor originally reported that 1,914 heinous crime convicts had been released through the good conduct law, but it had revised its report and now placed the figure at 2,159.

Among those who had returned to Bilibid were two of three convicts in the 1997 rape and murder of sisters Marijoy and Jacqueline Chiong of Cebu City.

The third convict, Josman Aznar, had yet to turn himself in.

The Philippine National Police said on Sunday that even elderly convicts who had been prematurely released should come back to prison for a recomputation of their good conduct credits.

PNP spokesperson Bernard Banac said the elderly convicts needed to be accounted for and undergo a review of their records.

“Appropriate release orders may be given after the review if found that they are really qualified,” Banac said.—Reports from Julie M. Aurelio, DJ Yap, Dona Z. Pazzibugan, Jeannette I. Andrade and Ador Vincent Mayol