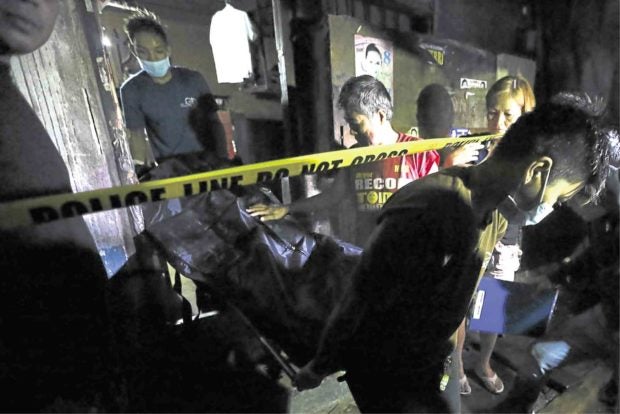 Funeral parlor personnel take out the body of a suspected pusher who was killed at home during an anti-drug operation in Caloocan City in 2018. (File photo from Philippine Daily Inquirer)

MANILA, Philippines – “Impunity once unleashed has no bounds. Anything can happen,” detained Sen. Leila de Lima said in a statement issued on Sunday as she renewed her warning against what she called the “culture of impunity” of the Duterte administration.

“It’s happening! Impunity in the killings, corruption, repression of dissent and legal or judicial harassments versus critics, and abuses in the exercise of presidential powers,” De Lima said. “And we’re allowing or tolerating all these. So little resistance. Many voices are muzzled.”

This is not the first time De Lima hit the alleged impunity of the Duterte administration.

Last May, she filed a resolution seeking a probe into the sudden increase in the number of drug suspects slain in police operations in Central Luzon.

“Congress, through relevant and appropriate legislation, must end the perpetration of the culture of impunity by facilitating the enforcement of the full extent of the law against persons, both state and nonstate actors, responsible for summary killings,” De Lima said in Senate Resolution No. 1041.

In September 2018, De Lima also sought the help of the international community, particularly the International Criminal Court (ICC) and the UN Human Rights Council (UNHRC) in ending impunity in the country, especially in relation to the campaign against illegal drugs.

“It is imperative for the International Criminal Court and relevant United Nations bodies and mechanisms to work and work urgently not only to frustrate Duterte’s plans but more importantly and ultimately to shrink the space for impunity in the Philippines,” De Lima said in an earlier message.