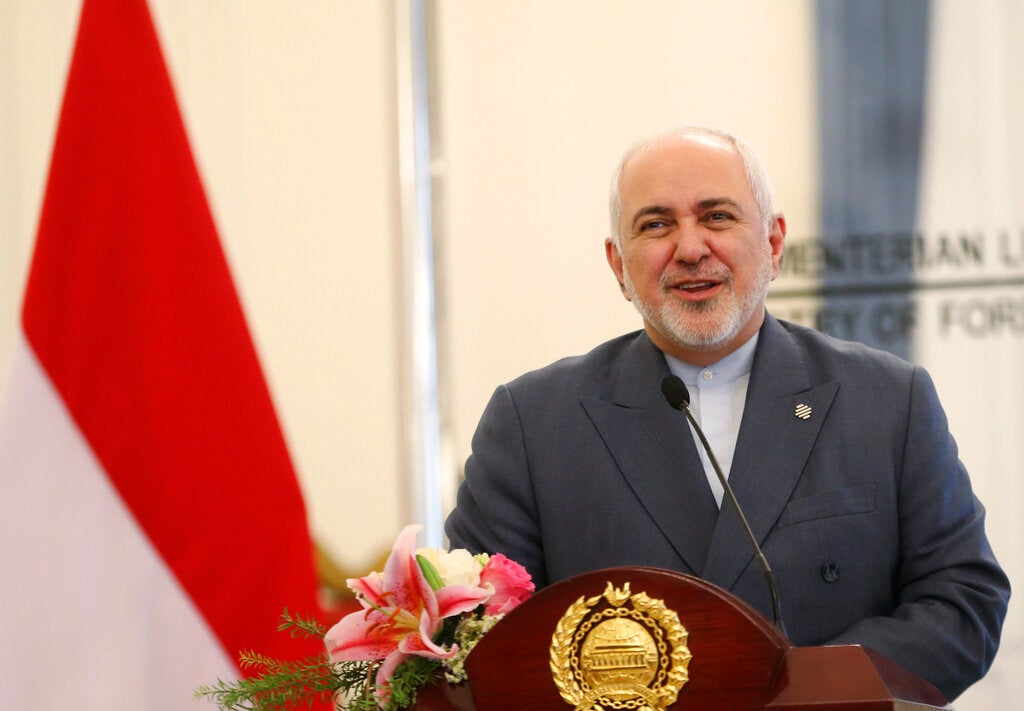 PARIS  — President Emmanuel Macron’s efforts to stitch together a deal with Iran to stop the 2015 nuclear accord from collapsing was hanging by threads Friday — but not yet broken, despite Tehran’s announced plans to step farther back from its international commitments.

Iran was poised to begin work on advanced centrifuges that will enrich uranium faster with no solution from Europe to provide a way to revive the deal ahead of the Friday deadline — the third incremental breach of the accord.

Europe called on Iran to pull back from the slippery slope that could undo the accord completely. It began falling apart last year after President Donald Trump withdrew the United States from the deal followed by escalated U.S. sanctions on Tehran that have choked off Iran’s ability to sell its crude oil abroad, a crucial source of government revenue, and sent its economy into freefall.

Iranian Foreign Minister Mohammad Javad Zarif has repeatedly called the sanctions “economic terrorism.” Iran views its scaling back on the nuclear accord as “maximum pressure” in the face of the U.S. policy of “maximum pressure.”

He lashed out at the sanctions again Friday.

Macron and Trump spoke by phone about Iran ahead of Friday’s deadline set by Tehran for European signatories to come up with a way for Iran to sell its oil, an official at the presidential Elysee Palace said, adding that “the dialogue is continuing.”

Trump plays a key role in a bargain Paris is trying to strike centered on what a French official involved in the negotiations said was Iran’s demand for credit lines possibly worth $15 billion — in tandem with a need for specific U.S. sanctions waivers so Iran can export to traditional clients.

Iran’s atomic energy agency was to detail its next move, overstepping research and development stipulations of the nuclear accord, at a Saturday news conference, Iranian media said. President Hassan Rouhani has already described it as highly significant.

On Sunday, the acting director general of the U.N. nuclear watchdog, the International Atomic Energy Agency, Cornel Feruta will meet high-ranking officials in Tehran as part of what it said were its “ongoing interactions” related to its monitoring under the nuclear deal. The IAEA, which issues compliance reports, meets in Vienna on Monday.

France remained silent Friday, leaving Europe to voice the concerns over an Iranian third step away from the nuclear deal.

European Commission spokeswoman Maja Kocijancic urged Iran “to reverse all activities that are inconsistent with its commitments” under the accord and to “refrain from any further measures that undermine the preservation and full implementation of the nuclear deal,” she said.

German Foreign Ministry spokesman Rainer Breul said Iran was not sending the “right statement” but added, “It’s not too late for Iran to leave the slope it has put itself on.”

French officials note that, under the nuclear deal, a two-month period lies ahead before Iran takes yet one more step away from compliance should Europe fail to wrangle a deal.

“Let’s not create artificial deadlines to measure the success of what we are doing,” Macron’s top diplomat said this week. He added, however, that if Iran goes ahead with failing to respect another part of the accord, “it will make our work more complicated.”

The official could not be named due to the sensitive nature of the subject.

Iran has twice before scaled back its commitments, creeping beyond its 3.67%-enrichment limit and its stockpile rules. Using advanced centrifuges speeds up enrichment and Iranian officials already have raised the idea of enriching to 20% — a small technical step from weapons-grade levels of 90%.

He spoke during a visit to Indonesia where his counterpart Retno Marsudi said he would like to see the nuclear accord “implemented fully and effectively.”

There was no sign that France was ready to drop its efforts to bring Iran and the United States together in a deal whose ultimate objective is to de-escalate tension in the Gulf region.

“The demarche consists of assembling the American conditions, the Iranian conditions and hold the two ends together,” said the French diplomat involved in negotiations.

“These are like knobs you turn. You just don’t go down a track in an intransigent basis,” the United States ambassador to the EU, Gordon Sondland, said this week in Brussels.

“Everything about the relationship with Iran is very dynamic.”