In the Amazon, indigenous debate how to save their lands 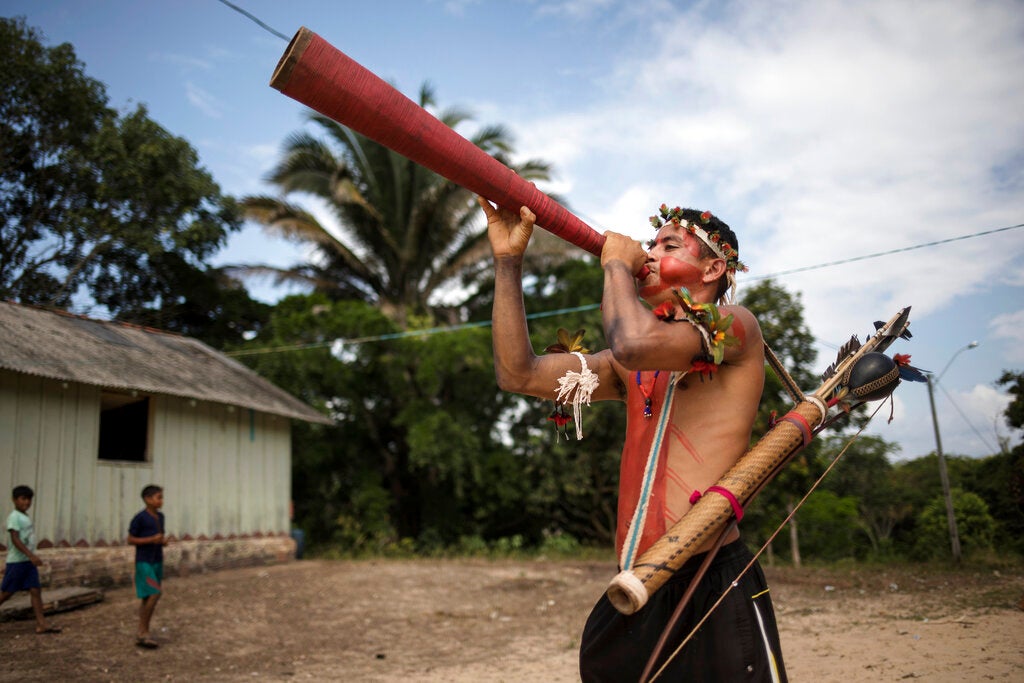 In this Sept. 3, 2019 photo, a man plays a horn during a meeting of Tembé tribes in Tekohaw indigenous reserve, Para state, Brazil. Under a thatch-roof shelter in the Amazon rainforest, warriors wielding bows and arrows, elderly chieftains in face paint and nursing mothers gathered to debate a plan that some hope will hold at bay the loggers and other invaders threatening the tribes of the Tembe. (AP)

TEKOHAW, Brazil — Under a thatch-roof shelter in the Amazon rainforest, warriors wielding bows and arrows, elderly chieftains in face paint and nursing mothers gathered to debate a plan that some hope will hold at bay the loggers and other invaders threatening the tribes of the Tembe.

Some had travelled long distances on dirt roads that cut through the lush jungle, or in boats along a muddy brown tributary of the Amazon River, all part of a 1,080-square-mile (2,766-square-kilometer) Alto Rio Guama homeland that is officially protected but in practice under siege.

Some of the men wore a type of red face paint that signified they were ready for war. Recent clashes saw the Tembe burning the trucks and equipment of illegal loggers on their territory, which is located in a Brazilian state plagued by thousands of fires burning on cleared jungle lands.

Some saw hope in the sustainable development plan presented this week at the meeting in the village of Tekohaw. It would include drones and other technology to curb the encroachers while helping the Tembe profit by harvesting wood, bananas and acai berries in a limited way from a part of their jungle — hopefully no faster than the jungle replenishes itself.

At one point, a group of women and children lined up to perform a call and response tribal dance that they said would help give participants strength and understanding. But many remained wary, some fearing the plan sounded too much like President Jair Bolsonaro’s calls for opening indigenous lands to development as a way to spur the nation’s economy.

“For us, the indigenous, this project is worrisome because we fight in favor of the protection of the territory,” said Valsanta Tembé, president of Tekohaw’s women’s indigenous association, who wore a mask made with red dye from urucum seeds.

“How can we be in favor of a project that willingly or not will cause the cutting of our native trees?” she asked. “Our future is on the line.”

Murilo Araújo, an environmental lawyer for Unifloresta, the Association for the Productive Chain of the Amazon Forest, said the mistrust is normal.

“Throughout these 500 years, they were always enslaved, sidelined. Everyone who came here always took something from them and didn’t leave anything behind,” he said.

“We’re talking about permanent forest management so they can sustain themselves long-term, fix their roads, buy medicines and invest on their young people,” he added. The products could be sold to companies around the world that sell sustainably produced goods.

He said he hoped the project could help the Tembe avoid conflict. “Right now they’re having to burn (logging) trucks, which is a natural defense mechanism for them,” Araujo said. “But that could have drastic consequences. It could lead to deaths. But why are they doing that? Because the authorities are taking too long to arrive.”

Brazil’s 900,000 indigenous people make up about 5% of the country’s population and their reservations account for about 14% of its territory. Bolsonaro has argued that such large reserves have hindered Brazil’s economic interests. But the indigenous people of Latin America’s largest economy have everything at stake.

“The Amazon is ending and that’s why we’re here — so that it doesn’t end,” said Lorival Tembé, the eldest chieftain, a founder of Tekohaw. “We can’t let it all end: the birds, all the other animals. We’re worried. We used to drink water from our river and now it’s getting polluted. A lot has changed. Bolsonaro wants to end with Indians. But we’re here to stand up to that.”

“The world is watching what’s happening in the Amazon,” said his son Sergio Muxi Tembé, the current village chief.

“We know Bolsonaro doesn’t like Indians. He’s anti-Indian,” said the chief, who wore a headdress of macaw and other feathers, orange shorts and a traditional bone bracelet on his wrist next to a Casio digital watch. “We have a different culture and that culture must be respected.”

About 600 members of the tribe live in Tekohaw. It’s on the banks of the Gurupi River where many fish for piranhas and other fish that they later grill over wood fires. Deep in the jungle, armed with spears and arrows, they hunt for birds, pigs and other animals. From the trees they take traditional medicines, as well as products they sell, such as acai, an Amazonian berry that’s a vitamin and calorie-packed breakfast staple in Brazil.

Classes had been canceled that day and life in the village seemed to have been put on hold so the Tembé tribes could debate the pros and cons of the project for hours, switching between Portuguese and their native Tupi-Guarani tongue.

At some point, the Unifloresta members presenting the plan stepped away to let the Tembe discuss among themselves, and handed out candy to a group of kids near the local school where walls are painted with drawings of handcrafts, caimans and other Amazonian animals.

In the end, the group of representatives from nine tribes decided to wait for more details on the plan.