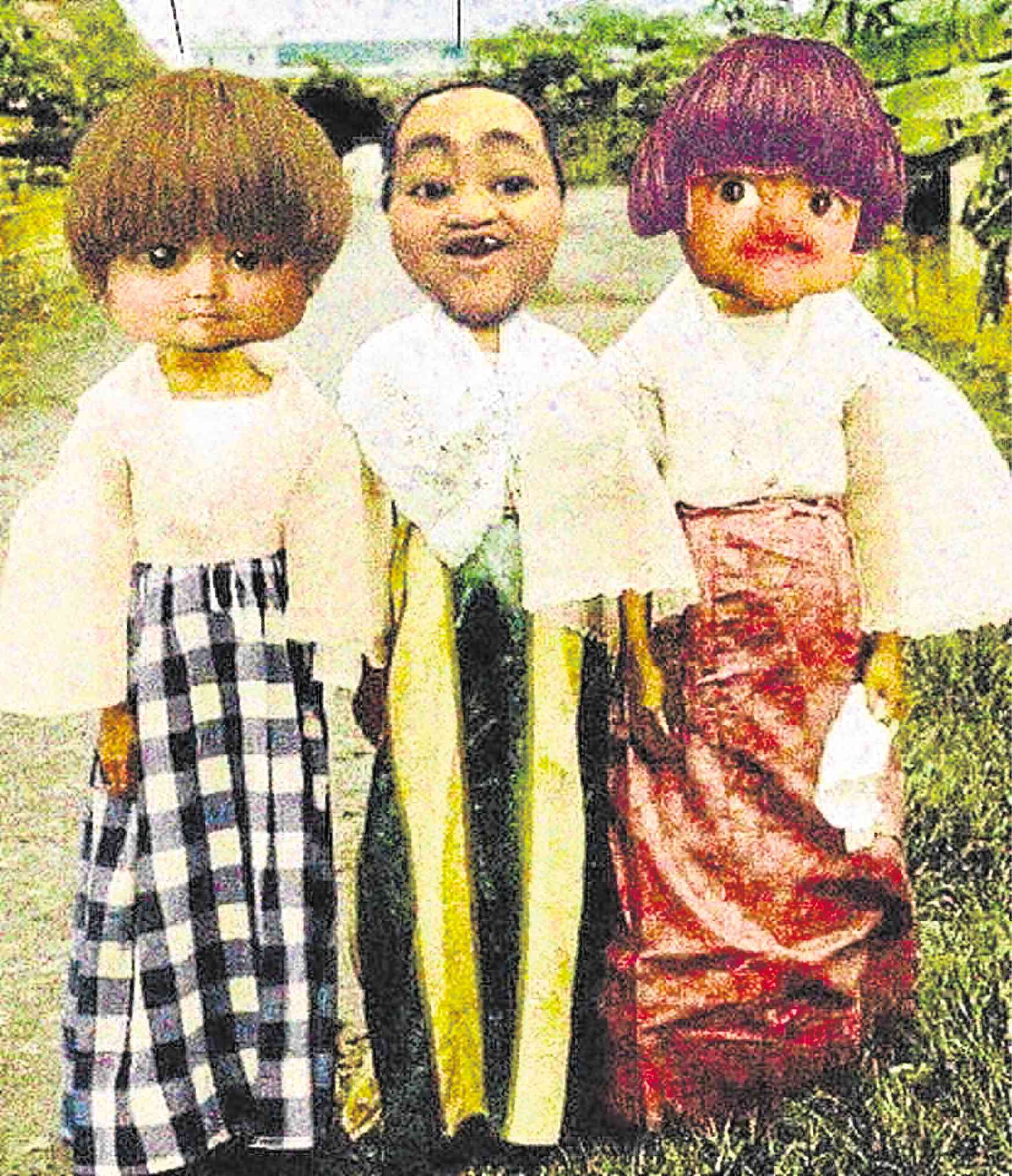 KAPAMPANGAN SISTERS The online series of the fictional characters of Pacing, Weng and Millet is generating interest in the language that is on the brink of death. —Center for Kapampangan Studies/Kinulayang Kasaysayan

ANGELES CITY—A film director based here is using humor in his digital creation to save the Kapampangan language.

The triumvirate of Kapampangan “atsi” (elder sisters) Darang Pacing, Weng and Millet, all acted and created online by writer and director Jason Paul Laxamana, 31, has drawn interest to what is considered a dying language.

The fictional characters are so popular that the 10,000 Facebook followers of Laxamana have grown to more than 70,000 since he uploaded in June the 15-second monologues of these women.

Laxamana uses Snapchat and filters to alter his face and voice in these videos that feature the three characters who speak, swear, insult, endear and snear in their crisp native tongue.

He also became the star on Saturday when the Holy Angel University (HAU) capped the celebration of the Aldo ning Amanung Sisuan (Day of the Kapampangan Language).

A large crowd of mostly women came to his meet-and-greet at HAU’s Plaza San Jose, seeking selfies and “groupies” and asking for his autograph.

“His tone [in speaking] is very Kapampangan. He also uses very old words that you don’t normally use but he knows how to use these without sounding theoretical. He makes them sound conversational,” Alarcon said.

Laxamana’s series is a “phenomenon that’s taking the Kapampangan world by storm,” according to Robby Tantingco, executive director of the HAU’s Center for Kapampangan Studies.

“We have tried books, magazines, lectures, music CDs and even cinema to rekindle interest in the Kapampangan language, but none of them has come close to the success of Pacing et al.,” Tantingco said.

He added: “I never thought a Kapampangan phrase, Kapampangan idiom, Kapampangan belief and Kapampangan cuss word could send people by the hundreds and thousands rolling down the floor in utter joy and celebration of local culture.”

Tantingco said: “Laughter, as it turned out, is the way to popularize a dying culture and language, and other ethnolinguistic groups facing the same problem can take a hint.”

Laxamana does not only thrive because of apps that he tries on the Internet when sleep escapes him.

In the brief program, he thought that his being a rock musician, storyteller, movie director and his avowed love for the Kapampangan culture and language have all come to play together to make the three women talk out their conflicted lives in a natural way.

He uploaded the videos without expectations. “As [a] culture worker, I see pop as a useful instrument to connect with the masses than with the elite,” he said, adding that he was “very shocked” with the good response the series has received.

Laxamana attributed the success of his digital creation to the “nostalgic element” it stirs among Kapampangans.

“It is probably because the Kapampangan on social media are reminded of their mothers or aunties in a funny way. Pacing represents these women we often hear ‘na tumatalak’ (nagging),” he said.

Tantingco called Laxamana a bridge of the old and the new.

“As filmmaker, his rom-com movies appeal to the young while his Pacing series are a hit among the old. The young get to know about old Kapampangan words and cultural expressions because their old folks make them watch Pacing alongside them,” he said.

To Tantingco, Pacing is a digital creation dwelling in the medium owned by young netizens but her appeal crosses over to old folks.

Laxamana said he planned to add more contents and longer videos for the three characters.

He is working now on his first comic book series “Anitu,” also in Kapampangan. The connection does not stop there. As a director, many of his settings are located in the province.

Other young people seemed not to be also giving up on the language.

Read Next
NPA ‘unwelcome’ in Quezon
EDITORS' PICK
Only 4,393 new COVID cases logged due to low number of tests
USAID Opportunity 2.0 calls for applicants for grants for out-of-school youth engagement
DOTr to defend proposal to increase passenger capacity in public transport
Hong Kong to further tighten COVID-19 travel restrictions
Legarda emphasizes role of ICC/IPs in nation building this IP month
Work-From-Home is here to stay and requires reliable logistics
MOST READ
Bongbong says PH should modernize infrastructure to become Asia’s next logistics hub
Martires asks why he is being singled out over issues on releasing SALNs
Isko to critics after remarks vs Robredo: I’m sorry, this isn’t about Mr. Congeniality
PDP-Laban’s Cusi wing inks coalition deal with Reform Party
Don't miss out on the latest news and information.