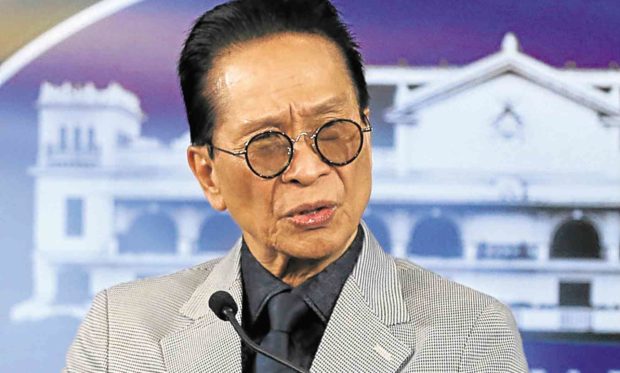 MANILA, Philippines—Palace spokesman Salvador Panelo admitted Thursday that the Ampatuan family has also sought his and President Rodrigo Duterte’s assistance, days after it was revealed that the family of convicted rapist and murderer Antonio Sanchez asked about their patriarch’s application for executive clemency.

Panelo, who is also Duterte’s legal counsel, did not identify which of the Ampatuans approached him but he said that one of them was a lawyer and an assistant secretary who is married to an Ampatuan.

“They are asking the intercession of the President,” Panelo said in a Palace briefing.

Panelo was the counsel of Andal Ampatuan Jr. on the case of the Maguindanao massacre, which is considered the deadliest single attack on journalists in the world.

The Palace official recounted that he met one of the family members in an event in Davao City.

Panelo said he introduced them to Duterte, who supposedly knew them already.

Panelo also revealed that he received a note from the Office of the President referring the Ampatuans to him, adding that the family is seeking an audience with Duterte.

He noted that they visited his office in Malacañang about two weeks ago.

A photo of the OP’s note to Panelo showed that the request came from Atty. Jehan-Jehan Ampatuan-Lepail and Bai Soraida Biruar-Ampatuan.

LOOK: Duterte's spokesman and legal counsel Salvador Panelo showed a copy of the Office of the President's referral of a request from Atty. Jehan-Jehan Ampatuan-Lepail and Bai Soraida Biruar-Ampatuan. @inquirerdotnet pic.twitter.com/PsXQWPlFEY

Soraida is the mother of Datu Saudi Ampatuan Jr. while Jehan-Jehan Lepail is Saudi’s wife.

Saudi Jr. is among the members of the Ampatuan clan implicated in the Maguindanao massacre, which killed 58 individuals, including 32 media practitioners. The Department of Justice is expecting a verdict on the incident before November 23 this year, the 10th anniversary of the incident.

Records from the security logbook at the New Executive Building in Malacañang showed that Soraida visited Panelo’s office on August 13.

Panelo made the admission amid allegations of conflict of interest when he referred to the Bureau of Pardons and Parole (BPP) a letter from Sanchez’ family about the former Calauan, Laguna mayor’s executive clemency application.

Several lawmakers questioned Panelo’s move but Duterte’s spokesman stressed that he only referred the letter to BPP and did not recommended the grant of executive clemency to Sanchez.

The BPP dismissed in December 2018 Sanchez’ petition for executive clemency. It upheld the dismissal of Sanchez’ appeal in a decision dated February 27, a day after Panelo wrote to the bureau.

Duterte also defended his spokesman, saying that Panelo did the right thing and did not violate any law. /jpv

READ: Panelo did not break any law by referring Sanchez letter – Duterte