Panelo did not break any law by referring Sanchez letter – Duterte 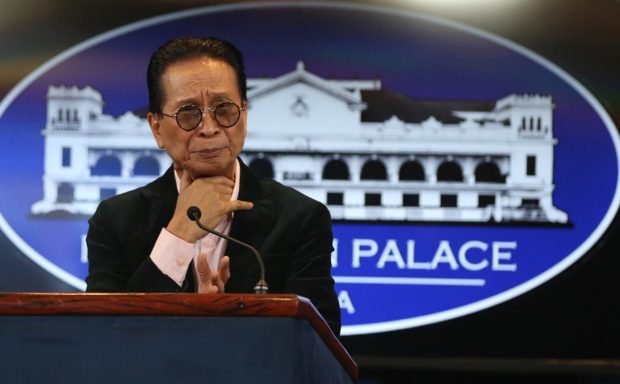 MANILA, Philippines — President Rodrigo Duterte defended on Wednesday his spokesman, Salvador Panelo, for referring to the Board Pardons and Parole (BPP) the application for executive clemency of rapist and murderer Antonio Sanchez, a former mayor of Calauan in Laguna.

The President said Panelo did not violate any law when he referred the letter from the Sanchez family asking for favorable consideration of the former mayor’s bid for early release.

“When the letter got to him, he referred it to the proper entity — that is, the board. Panelo did not commit any infraction of the law,” the President said, speaking partly in Filipino.

Panelo, who is also chief legal counsel of the President, served as one of the lawyers of Sanchez in the 1993 rape and murder of Eileen Sarmenta and the murder of her friend, Allan Gomez, — both of them students of the University of the Philippines in Los Baños.

At the second Senate hearing on the good conduct time allowance (GCTA) law on Tuesday, BPP chief Reynaldo Bayang revealed that Panelo wrote to him on Feb. 26 this year, referring a letter written by Sanchez’s daughter, Marie Antonelvie, regarding the pardon application of her father.

Several lawmakers questioned Panelo’s move, but the spokesman stressed that he only referred the letter to BPP and did not recommend the grant of executive clemency to Sanchez.

The BPP dismissed in December 2018 Sanchez’s petition for executive clemency. It upheld the dismissal of Sanchez’s appeal in a decision dated Feb. 27, a day after Panelo wrote to the bureau.