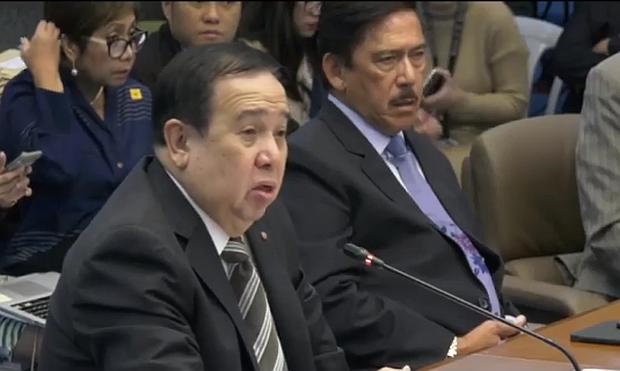 Sen. Richard Gordon leads the hearing on the GCTA law on Tuesday, Sept. 4, 2019. Seated beside him is Senate President Vicente Sotto III. (Photo from a video posted on Gordon’s Facebook account)

MANILA, Philippines — Senators continued on Tuesday to push for the rearrest of heinous crimes convicts that wrongly released under a law on good conduct credits.

In a Senate inquiry into the controversial Republic Act No. 10592, which increased the number of days credited to good conduct time allowance (GCTA), Sen. Richard Gordon cited cases wherein freed convicts were rearrested because as they were proven to have been wrongly released.

“There are decided cases one of which was cited by [Senate Minority Leader Franklin] Drilon… that they erred in the release [of convicts] and they recalled the order. And the reason — common sense — was that it was wrong to release them,” Gordon said, speaking partly in Filipino. “Therefore, you can rearrest them because they have not finished their sentence.”

Gordon chairs the Senate justice and human rights committee, which conducted the probe into the implementation of the said law.

Sen. Christopher “Bong” Go also raised the same issue to the Department of Justice (DOJ) during the hearing.

He asked Justice Secretary Menardo Guevarra on possible remedies that could be made by the Department of Justice (DOJ) on the release of convicted felons under the GCTA.

“What are your proposed remedies? Will they be rearrested? How will you implement the rearrest? Can that be done legally? Instead of them sowing terror again, ” Go said.

“They will be more dangerous to the public. So give a shoot-to-kill order if they don’t want to return, if they they fight back and refuse to return. Or is there a basis for rearresting? That’s what the public wants to hear,” Go added.

Sen. Juan Miguel Zubiri agreed that the 1,914 heinous crime convicts earlier released by the Bureau of Corrections (BuCor) should be rearrested.

“I know it’s difficult on your part. You’re a lawyer. I know lawyers are very careful with the decisions,” Zubiri said, addressing Guevarra.

“However, I always err on the side of the victims. Kawawa naman yung mga biktima dito,” he added.

Zubiri pointed out that those convicted of heinous crimes should not have been qualified to avail of the GCTA.

“The advocacy at the time was only for minor crimes,” he said.

“I hope you could find your way in being able to come up with a decision…file it with the proper courts for the possible rearrest because of the wrongful release of these prisoners,” he added.

Drilon, meanwhile, reiterated that the DOJ could seek the rearrest of heinous crime convicts, including the three of the seven men convicted for the rape-slay of the Chiong sisters in Cebu.

“The DOJ has valid and legal reasons to seek rearrest of the 1,914 prisoners serving a life sentence but were wrongly released by the Bureau of Corrections [BuCor],” Drilon said.

“The law should be interpreted to give justice to the victims. An interpretation that unqualifiedly and unjustly favors the oppressor, rather than the victims, may cause people’s trust in our justice system to erode,” he explained. “It was clearly established that the procedures were not followed and on that basis and in accordance with the case of People vs. Tan, they can be re-arrested. Let them question it in the Supreme Court.”

Drilon has earlier cited the 1967 ruling on the case of Fidel Tan who was ordered rearrested by the Supreme Court.

Tan, who was meted with a penalty of up to four years and two months imprisonment, was released by a provincial warden only after serving two years, eight months and 21 days of his sentence.

The warden released Tan by computing and crediting the good conduct time allowance.

However, a provincial prosecutor moved for Tan’s rearrest, insisting that he was never turned over to the national penitentiary and that the warden had no authority to the GCTA under the Revised Penal Code and Act No. 2489 of the Philippine Legislature in 1914.

READ: Drilon: Convicts may be rearrested if their release was illegal

Responding to the senators’ suggestions, Guevarra said the DOJ still had to “make the proper amendments to the implementing rules and regulations to make the legal basis very clear before any specific action, practical action is taken.”

“It’s just a matter of priorities. We know what we’re are going to do, but we want to lay the legal basis for doing so,” the justice chief said.

On Tuesday, Malacañang also ordered the DOJ to study the possibility of re-arresting those disqualified by GCTA law but were still released.

This developed following reports of the possible release of rape and murder convict former Calauan Mayor Antonio Sanchez under the GCTA law.

In 1995, Sanchez and his six henchmen were sentenced to seven life imprisonments each for the rape and murder Eileen Sarmenta and the murder of Allan Gomez — both students of the University of the Philippines in Los Baños.

However, his supposed freedom from prison was halted due to public outrage over the possibility of his release and pending review of the implementation of the law.