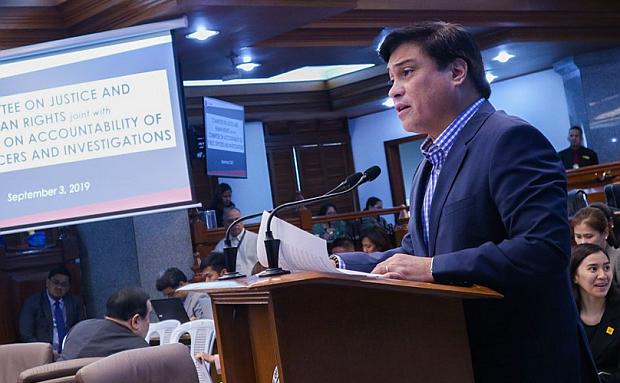 Sen. Juan Miguel Zubiri speaks at the hearing on the GCTA law on Tuesday, Sept. 4, 2019. (Photo from his Facebook account)

Zubiri filed the bill in the wake of the near release of rape and murder convict Antonio Sanchez, a former mayor of Calauan in Laguna, under the good conduct time allowance (GCTA).

“Far from their victims and society at large, Alcatraz-like prisons will keep us safe. They suffer the punishment and we are kept safe far away from their clutches,” Zubiri said in a statement issued on Tuesday.

“Jails keep our society safe as we punish criminals by restricting their liberty, including totally taking away their political rights,” he added.

The bill proposes the creation of Heinous Crimes Penitentiary (HCP) facilities in several regions to be identified by the justice secretary and built and operated by the Bureau of Corrections.

“We know recidivists and incorrigibles will claw their way out of prison if given the chance through brute force or influence. This is what faces us today. A celebrated crime’s infamous author nearly got total liberty which he does not deserve at all,” he added.

“Within one year after these new facilities are established, the prisoners serving their sentences in the National Bilibid Prison and other jails of the Bureau of Corrections shall be transferred to the new HCP facilities most preferably in solitary confinement,” he added.

Nevertheless, Zubiri expressed support for the government’s effort to improve jail conditions across the country,

“The overarching principle should be to render justice to victims, protect communities and allow certain basic rights to prisoners such as nutrition and hygiene,” he said.

“Our prisons are also reformative in nature. We offer education and livelihood training to prepare them for meaningful albeit restricted life and for those set free within the provisions of the law,” he added. “However, convicts of heinous crimes will just have to live their life out under maximum security or total isolation, as needed.”