“It’s just as painful as before …We’re more fearful this time,” Iluminada Gomez told the Senate committee on justice on Monday.

Her son, Allan, and Eileen Sarmenta were allegedly abducted and killed by Sanchez and his aides in 1993. Both were students of the University of the Philippines-Los Baños.

Gomez said she only learned about Sanchez’s impending release due to good conduct while she is watching the news inside a passenger bus.

Until now, she said, her family has not received an apology from Sanchez. 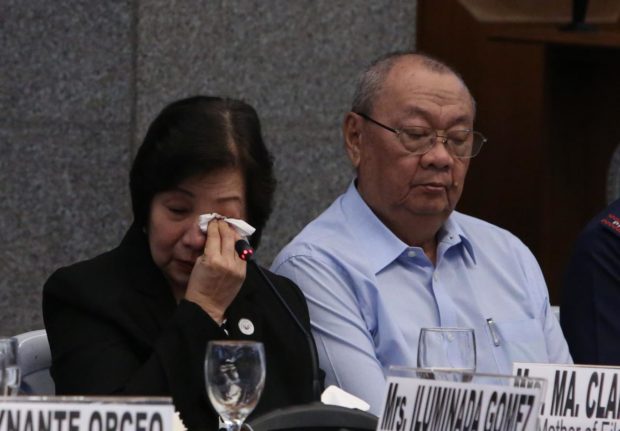 Parents of slain UP students Aileen Sarmenta and Allan Gomez appear before the Senate hearing on GCTA on Monday. INQUIRER photo / MARIANNE BERMUDEZ

Like Gomez, Sarmenta’s mother, Ma. Clara, was clueless that Sanchez was included in the list of inmates that would soon walk out of jail.

Her daughter and Allan were abducted by Sanchez’s aides supposedly as a “gift” to Sanchez. The former mayor raped the victim first and then his aides took turns in abusing her.

The two students were both killed by Sanchez’s men.

Clara said her world stopped the year her daughter was brutally killed.

“Parang nawala yung 1993 sa buhay ko,” she said, “Actually po, I seek  professional help for me to carry on [with] my life as a normal person.”

Clara could not help but asked why their daughter’s attacker would even be  considered for release.

But the government already clarified that Sanchez was not among those   eligible for the program that credits good conduct time allowance for an early release. /jpv