The decision was promulgated last August 30, he added.

Jimenez noted that the decision “cited the insufficiency in form and substance of the election protest filed by Eusebio, in that ‘it failed to reflect a detailed specification of the acts or omissions complained of showing the electoral frauds, anomalies, or irregularities in the protested precincts'”

“Yes,” Macalintal told to INQUIRER.net in a text message when asked for confirmation, adding that their camp only received the decision on Monday.

Under the 9-page decision, the Comelec said that the camp of Eusebio failed to present sufficient form and substance to back his allegations against Sotto.

“The failure to indicate the required contents in the election protest will result to summary dismissal,” the memorandum signed by presiding Commissioner Luie Tito Guia and Commissioners Socorro Inting and Antonio Kho noted.

In his election protest, Eusebio said that there were some clustered precincts that suffered voting counting machine malfunctions and SD card glitches on election day.

He also accused Sotto of engaging with vote-buying among constituents which is an election violation. Sotto was also accused of committing other irregularities and fraud in the conduct of election day.

However, Comelec said that despite these allegations, “there was no mention in the election protest that objections were made during the conduct of voting.”

Sotto ended the 37-year reign of the Eusebios in the city after getting 209,370 votes, against Eusebio’s 121,556 in the midterm elections last May.

Eusebio claimed that there were 29 clustered precincts missing in the statement of votes, among other issues.

Sotto, however, said that the matter was just a case of “printing error” and asked the Comelec to junk the protest. /gsg, je 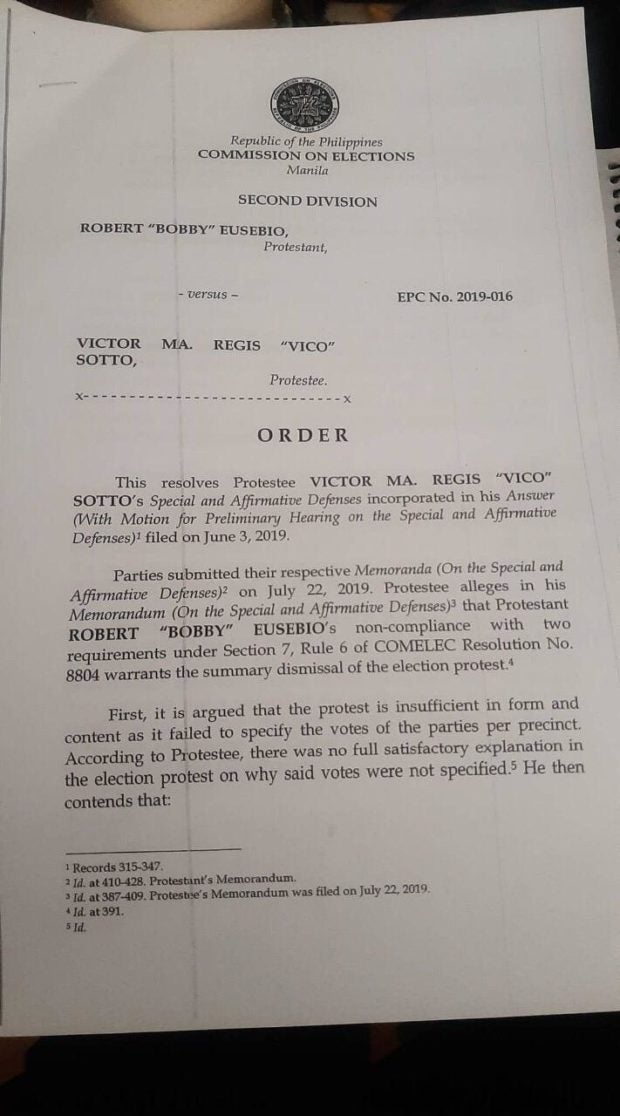 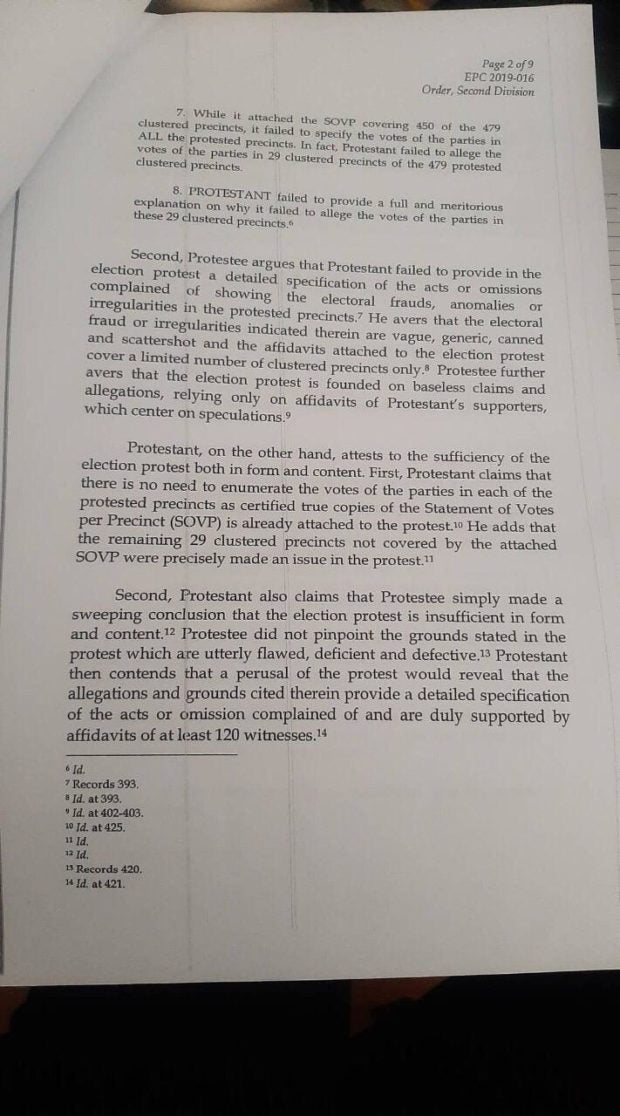 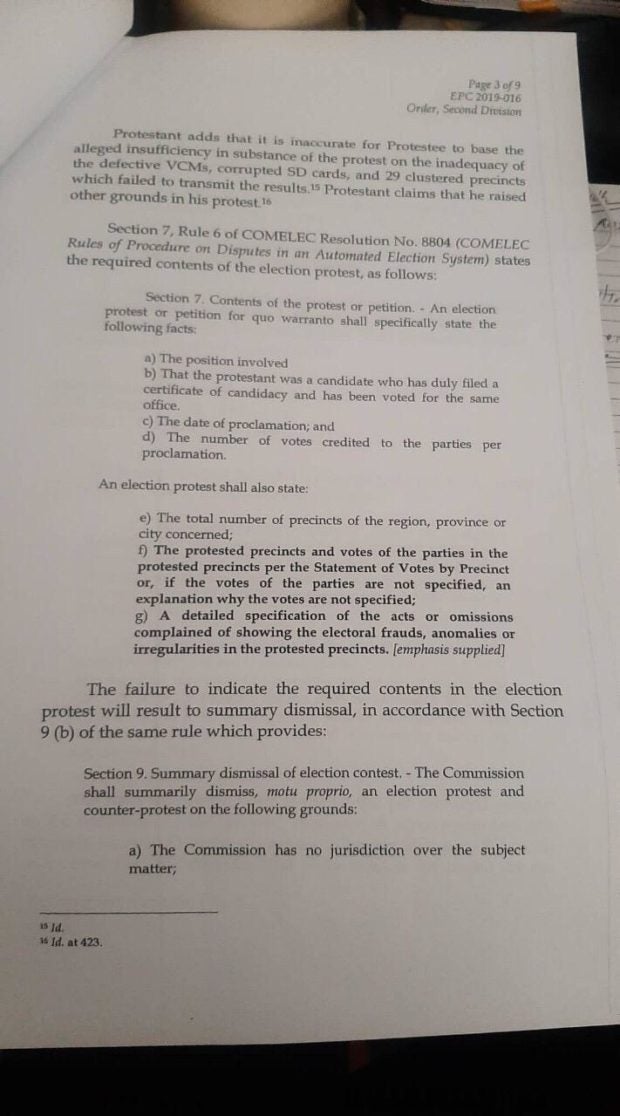 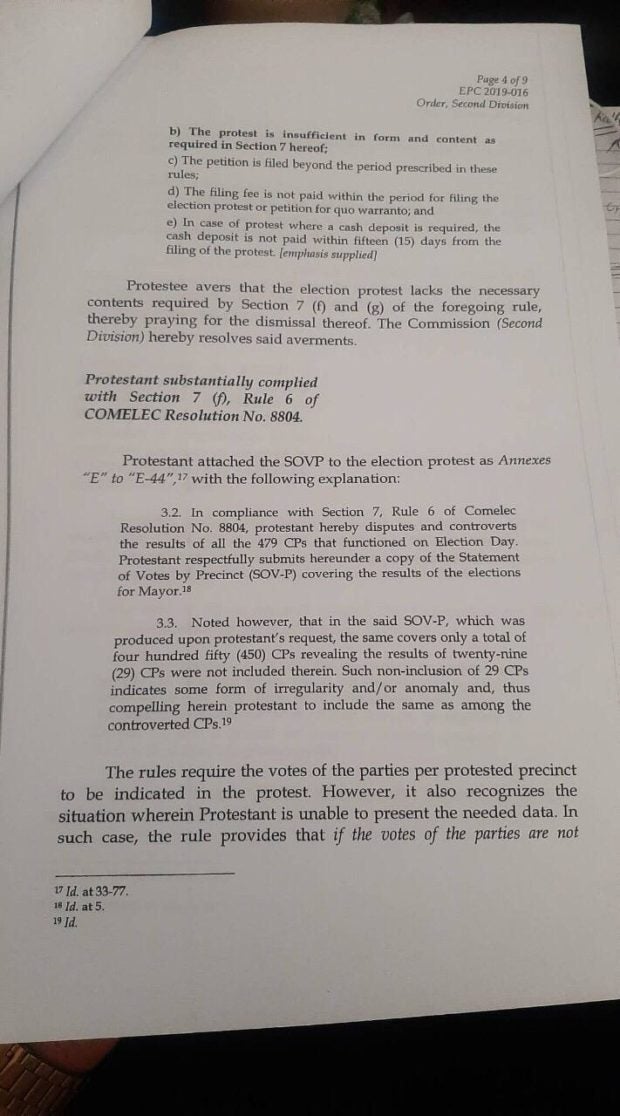 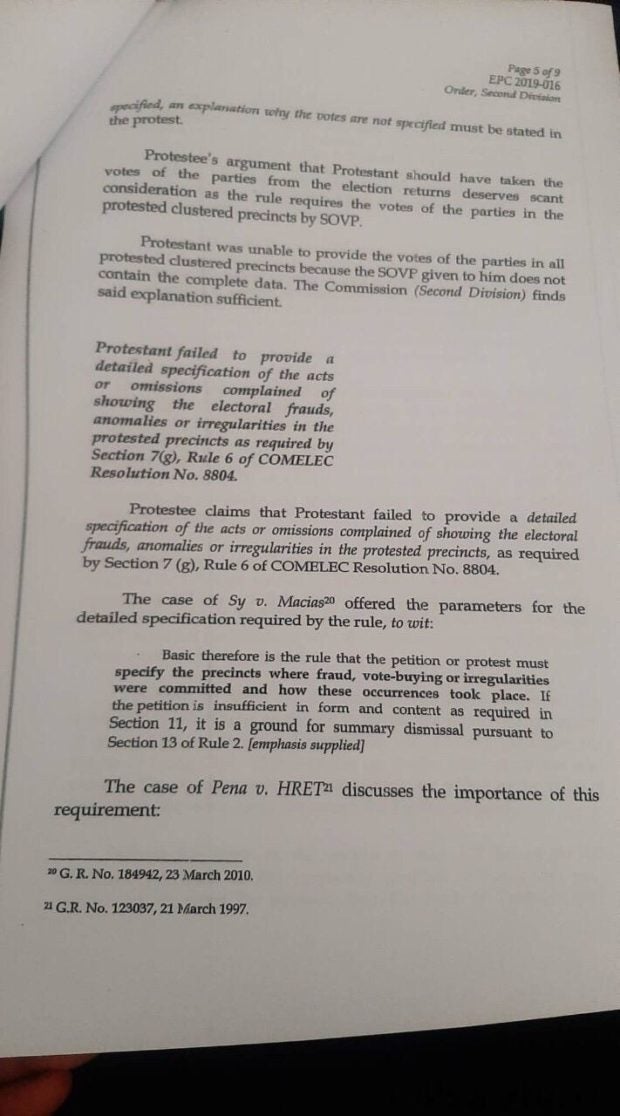 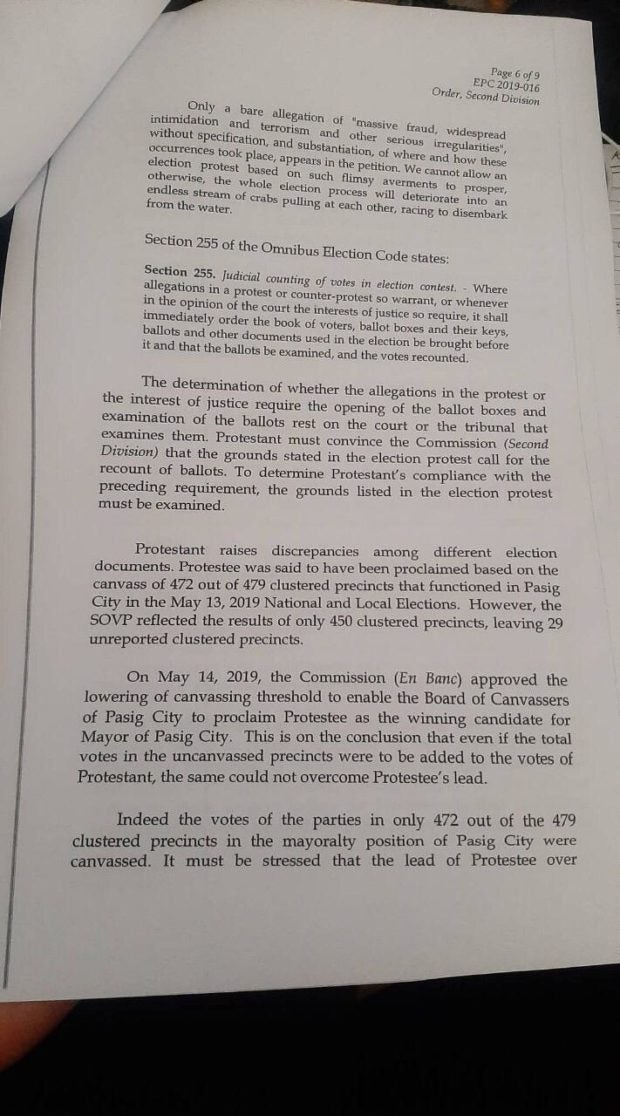 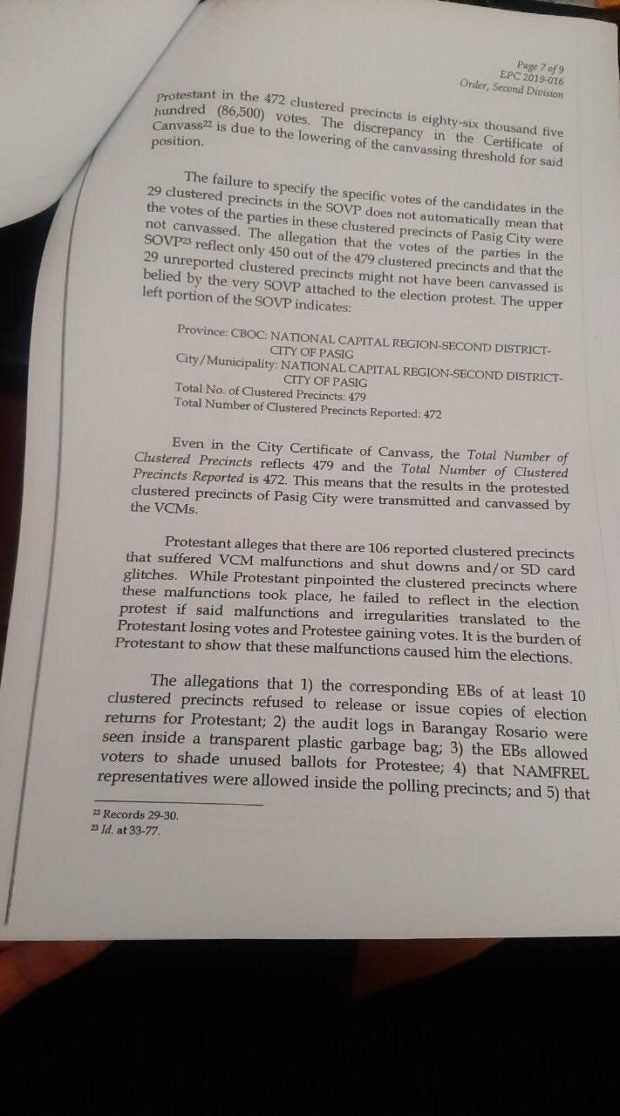 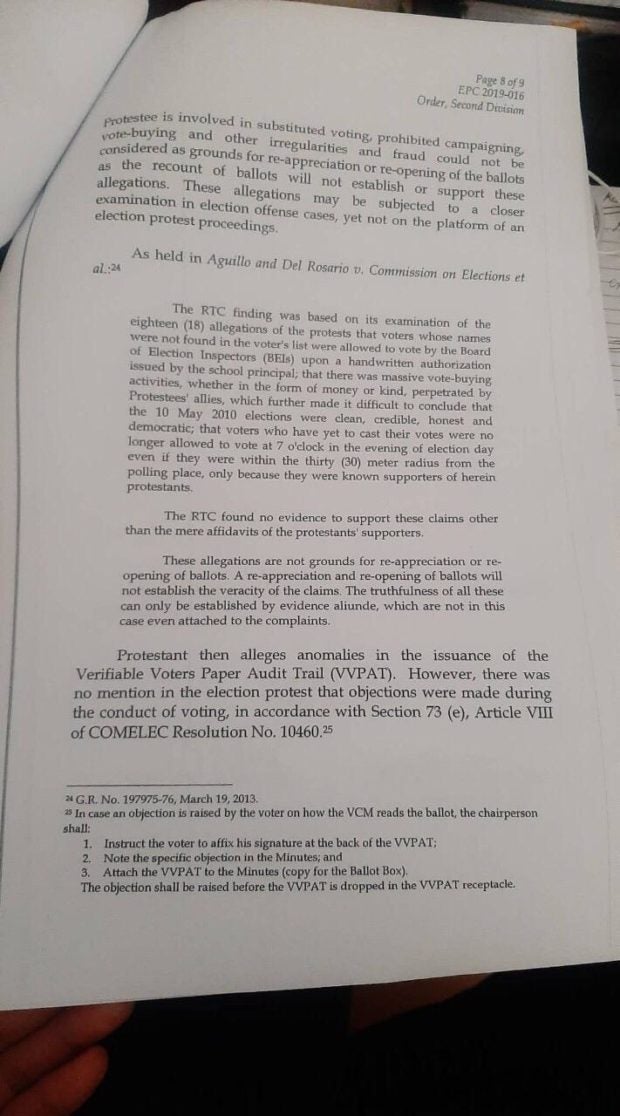 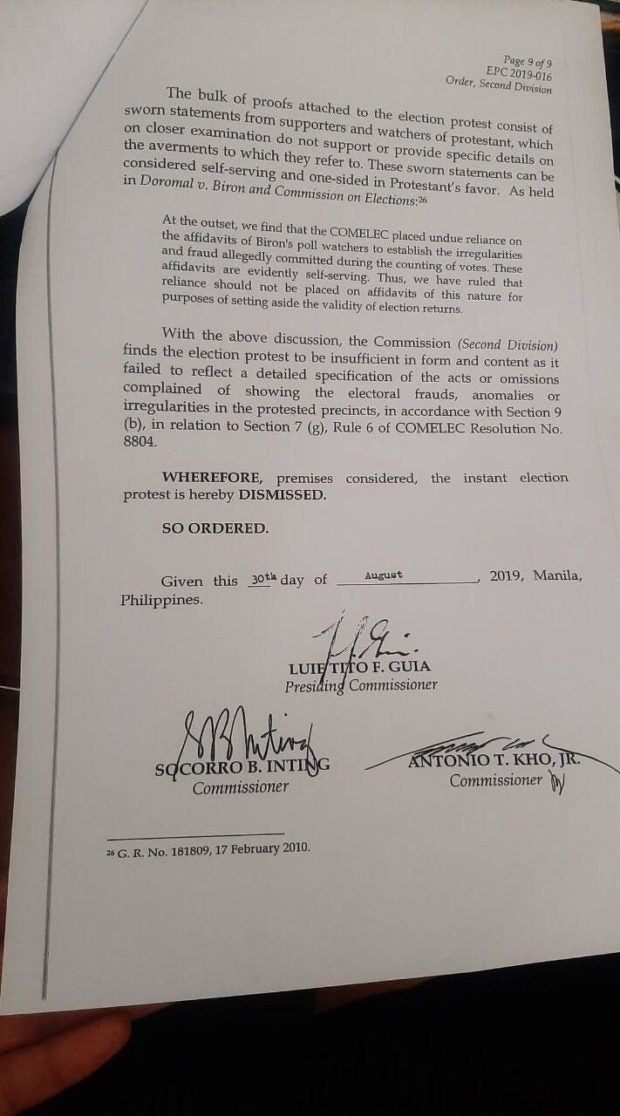