Evacuations begin as ‘Dorian’ bears down on northern Bahamas 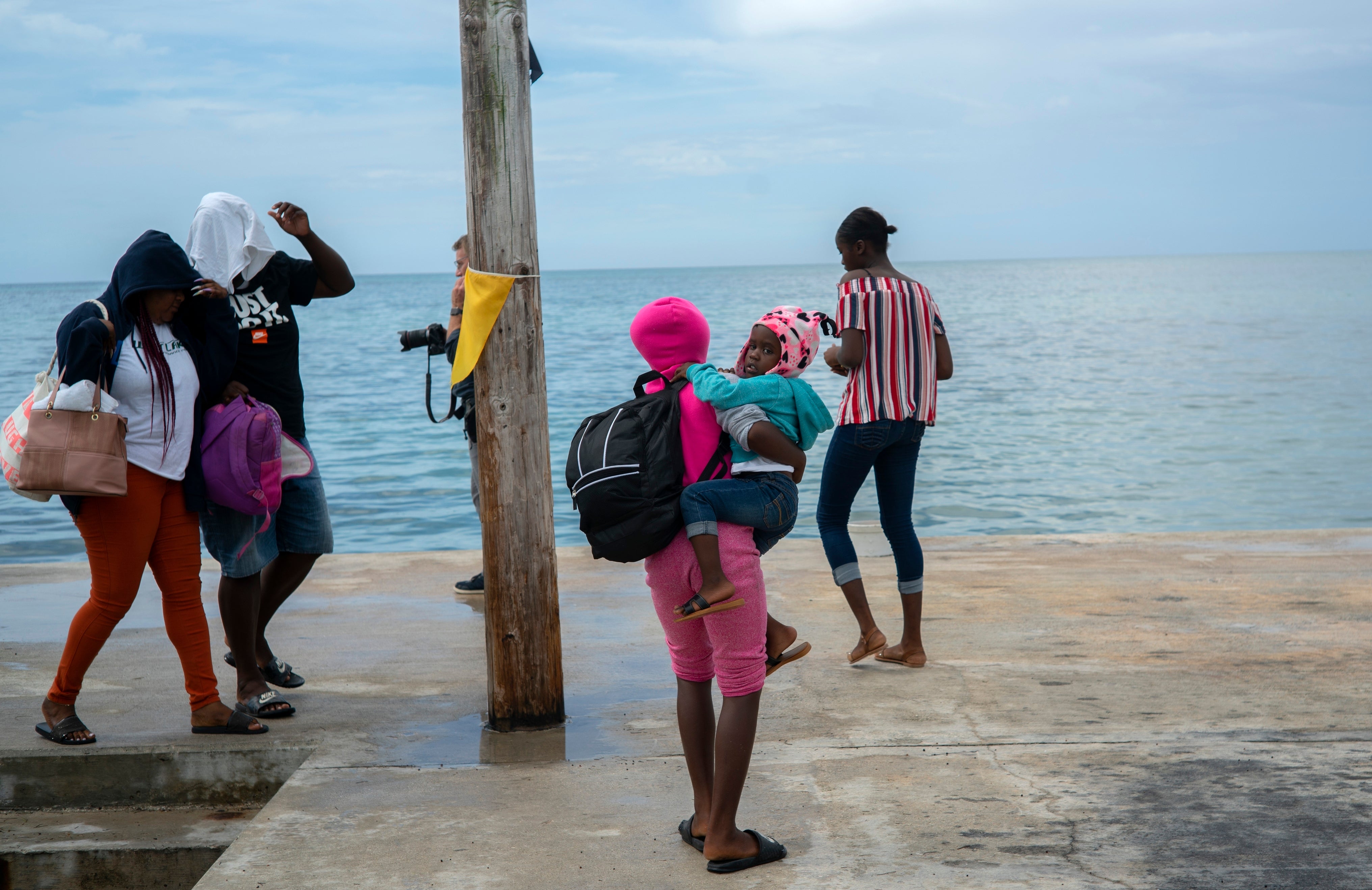 A woman carries a girl in her arms after being evacuated from a nearby Cay due to the danger of floods after arrive on a ship at the port before the arrival of Hurricane Dorian in Sweeting’s Cay, Grand Bahama, Bahamas, Saturday Aug. 31, 2019.  (AP Photo/Ramon Espinosa)

McLEAN’S TOWN CAY, Bahamas — Hurricane Dorian bore down on the northern Bahamas on Saturday with howling winds, surging seas and a threat of torrential rains, forcing some evacuations and hotel closures ahead of the fierce Category 4 storm.

Forecasters expected Dorian, packing 240 kph winds, to hit some Bahamian islands Sunday before heading near Florida and then skirting along or off the U.S. Southeast seacoast. The projected turn north in the coming days could spare the U.S. a direct hit, but would still threaten Florida, Georgia and the Carolinas with powerful winds and rising ocean water that could cause potentially deadly flooding.

In the Bahamas, tourists were sent to government shelters in schools, churches and other buildings offering protection from the storm while residents were evacuating.

“My home is all battened up, and I’m preparing right now to leave in a couple of minutes. … We’re not taking no chances,” said Margaret Bassett, a ferry boat driver for the Deep Water Cay resort. “They said evacuate, you have to evacuate. It’s for the best interests of the people.”

Over two or three days, the hurricane could dump as much as 4 feet of rain, unleash devastating winds and whip up a dangerous storm surge, said private meteorologist Ryan Maue and some of the most reliable computer models.

Bahamas Prime Minister Hubert Minnis warned that Dorian is a “dangerous storm,” saying that people “who do not evacuate are placing themselves in extreme danger and can expect a catastrophic consequence.”

Government spokesman Kevin Harris told The Associated Press that the hurricane was expected to affect some 73,000 residents and 21,000 homes. He said authorities had closed airports in The Abaco Islands, Grand Bahama and Bimini, but Lynden Pindling International Airport in the capital of Nassau would remain open.

Small skiffs rented by authorities ran back and forth between outlying fishing communities and McLean’s Town, a settlement of a few dozen homes on the eastern end of Grand Bahama island, about 240 kilometers from Florida’s Atlantic coast.

Most were coming from Sweeting Cay, a fishing town of a few hundred people that is about 5 feet above sea level and was expected to be left completely underwater.

A few fishermen planned to stay, which could put them in extreme danger. “Hoping for the best, that the storm passes and everybody is safe until we return home,” fisherman Tyrone Mitchell said.

Jeffrey Allen, who lives in Freeport on Grand Bahama, said he has learned after several storms that sometimes predictions don’t materialize, but it’s wise to take precautions.

“It’s almost as if you wait with anticipation, hoping that it’s never as bad as they say it will be. However, you prepare for the worst nonetheless,” he said.

The storm-prone Bahamas archipelago on average takes a direct hit from a hurricane every four years, officials say. Construction codes require homes to have metal reinforcements for roof beams to withstand winds into the upper limits of a Category 4 hurricane, and compliance is generally tight for residents who can afford it. Poorer communities typically have wooden homes and are generally lower-lying, placing them at tremendous risk.

After walloping the northern Bahamas, Dorian was expected to dance up the U.S. Southeast coast, staying just off the shores of Florida and Georgia on Tuesday and Wednesday before skirting South Carolina and North Carolina on Thursday.

The National Hurricane Center in Miami stressed that Dorian could still hit Florida, where millions of people have been in the storm’s changing potential path. But after days of predictions that put the state in the center of expected landfalls, the hurricane’s projected turn northeast was significant.

Carmen Segura said she had installed hurricane shutters at her house in Miami, bought extra gas and secured water and food for at least three days. She felts well prepared and less worried given the latest forecasts but was still uneasy given the storm’s unpredictability.

“Part of me still feels like: So, now what?” Segura said.

Florida Gov. Ron DeSantis warned residents along the state’s Atlantic coast, “We’re not out of the woods yet.” He noted some forecast models still bring Dorian close to or even onto the Florida peninsula.

“That could produce life-threatening storm surge and hurricane force winds,” DeSantis said. “That cone of uncertainty still includes a lot of areas on the east coast of Florida and even into central and north Florida, so we are staying prepared and remaining vigilant.”

He said he spoke with Trump, who pledged any help Florida needs.

Some counties in Florida told residents of barrier islands, mobile homes and low-lying areas to be ready to flee in the coming days.

Sherry Atkinson, who manages a hotel on North Carolina’s Outer Banks, said the hurricane wasn’t spoiling holiday vacations for guests. “So far, there hasn’t even been a snippet of conversation about evacuations,” she said.

A portion of Florida’s east coast was placed under a tropical storm watch Saturday, with winds of 63 to 118 kph possible within two days.

Some islands in the Bahamas remained under a hurricane warning, with winds of 119 kph or greater expected.

“We ask for God’s guidance and for God to assist us through this,” the prime minister said.