Police attempt to arrest protesters at Prince Edward MTR Station, Hong Kong, Saturday, Aug. 31, 2019. Hundreds of people are rallying in an athletic park in central Hong Kong as a 13th-straight weekend of pro-democracy protests gets underway. (Ring Yu/HK01 via AP)

HONG KONG — Protesters in Hong Kong threw gasoline bombs at government headquarters and set fires in the streets on Saturday, while police stormed a subway car and hit passengers with batons and pepper spray in scenes that seem certain to inflame tensions further in a city riven by nearly three months of pro-democracy demonstrations.

Police had denied permission for a march to mark the fifth anniversary of a decision by China against fully democratic elections in Hong Kong, but protesters took to the streets anyway, as they have all summer. They provoked and obstructed police repeatedly but generally retreated once riot officers moved in, avoiding some of the direct clashes that characterized earlier protests.

Late at night, though, video from Hong Kong broadcaster TVB showed police on the platform of Prince Edward subway station swinging batons at passengers who backed into one end of a train car behind umbrellas. The video also shows pepper spray being shot through an open door at a group seated on the floor while one man holds up his hands.

It wasn’t clear if all the passengers were protesters. Police said they entered the station to arrest offenders after protesters assaulted others and damaged property inside. The TVB video was widely shared on social media as another example of police brutality during the protests. Angry crowds gathered outside Prince Edward and nearby Mongkok station, where police said they made arrests after protesters vandalized the customer service center and damaged ticket machines.

Protests erupted in early June in Hong Kong, a semi-autonomous Chinese territory of 7.4 million people. A now-shelved China extradition bill brought to the fore simmering concerns about what many in the city see as an erosion of the rights and freedoms that residents are supposed to have under a “one country, two systems” framework.

The mostly young, black-shirted protesters took over roads and major intersections in shopping districts on Saturday as they rallied and marched with no obvious destination in mind.

Authorities closed streets and a subway stop near the Chinese government office and parked water cannon trucks and erected additional barriers nearby, fearing protesters might target the building. The office would have been the endpoint of the march that police did not allow. 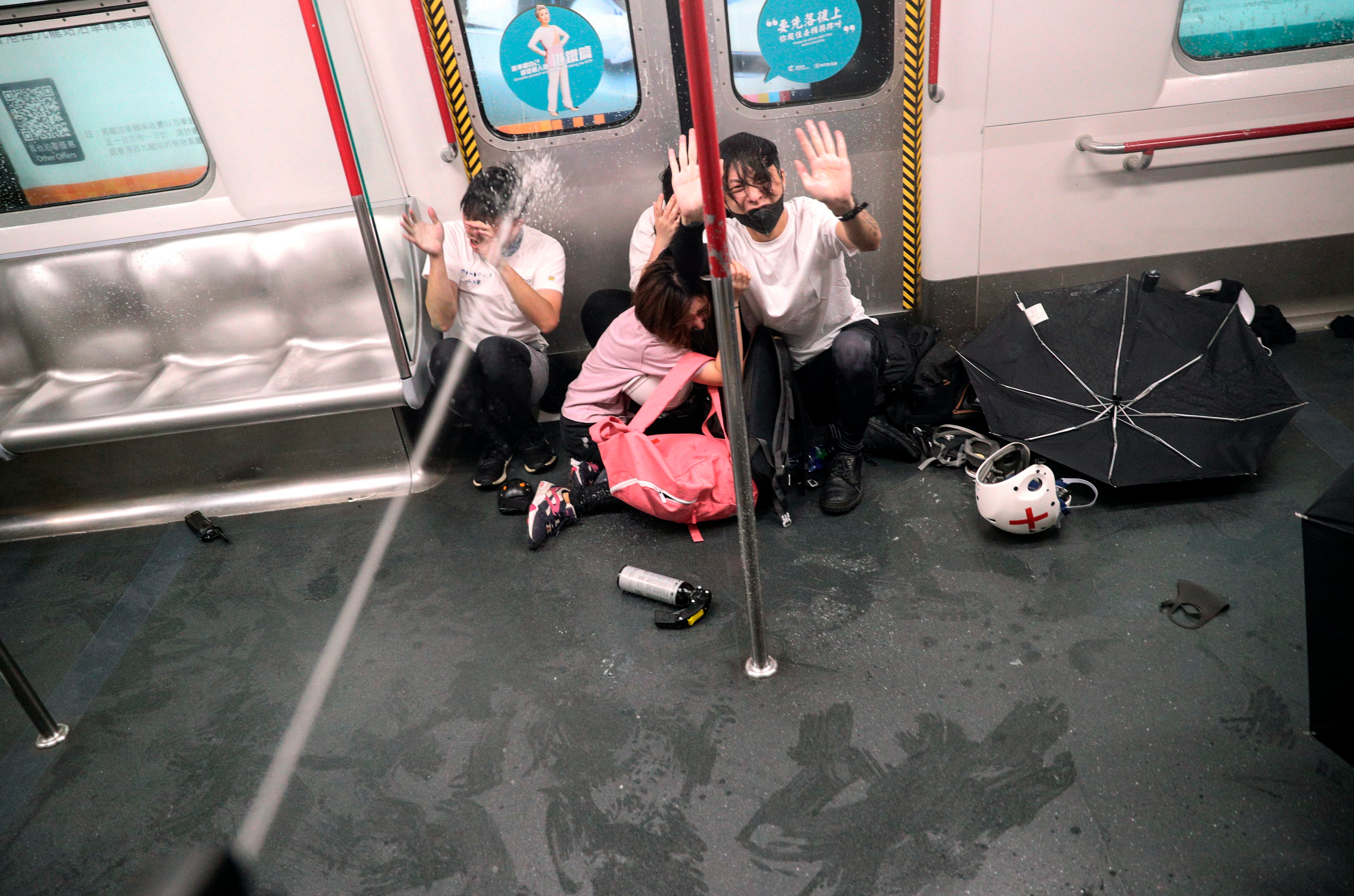 Instead, a group of hard-line protesters decided to take on police guarding government headquarters from behind large barriers that ring the building to keep demonstrators at bay.

While others marched back and forth nearby, a large crowd wearing helmets and gas masks gathered outside. They pointed laser beams at the officers’ heads and threw objects over the barriers and at them. Police responded with tear gas, and protesters threw gasoline bombs into the compound.

Then came the blue water. A water cannon truck fired regular water, followed by repeated bursts of colored water, staining protesters and nearby journalists and leaving blue puddles in the street.

The standoff continued for some time, but protesters started moving back as word spread that police were headed in their direction. A few front-line protesters hurled gasoline bombs at the officers in formation, but there were no major clashes as police cleared the area.

Protesters regrouped and blocked a major commercial street by piling up barricades and setting a large fire. Smoke billowed into the air as hundreds of protesters waited on the other side of the makeshift barrier, many pointing laser beams that streaked the night sky above them.

Firefighters made their way into the congested area on foot to put out the fire. Police in riot gear removed the barricades and moved in quickly. They could be seen detaining a few protesters, but by then, most had already left.

As police advanced east down Hennessey Road, protesters made another stand in the Causeway Bay shopping district. They threw gasoline bombs at police, who fired tear gas and water cannons.

Protesters built another fire, a smaller one, in front of Sogo department store. Police waited behind their riot shields while firefighters put out the smoldering fire with extinguishers. When police moved in, the protesters had again retreated.

Democratic Party lawmaker Lam Cheuk-ting said Hong Kong citizens would keep fighting for their rights and freedoms despite the arrests of several prominent activists and lawmakers in the past two days, including activist Joshua Wong.

Protesters are demanding the full withdrawal of the extradition bill — which would have allowed Hong Kong residents to be sent to mainland China to stand trial — as well as democratic elections and an investigation into police use of force.

“I do believe the government deliberately arrested several leaders of the democratic camp to try to threaten Hong Kong people not to come out to fight against the evil law,” Lam said at what was advertised as a Christian march earlier Saturday.

About 1,000 people marched to a Methodist church and police headquarters. They alternated between singing hymns and chanting slogans of the pro-democracy movement. An online flyer for the demonstration called it a “prayer for sinners” and featured images of a Christian cross and embattled Hong Kong leader Carrie Lam, who had proposed the extradition bill.

The Civil Human Rights Front, the organizer of pro-democracy marches that have drawn upward of a million people this summer, canceled its march after failing to win police approval. Police said that while previous marches have started peacefully, they have increasingly degenerated into violence.

The standing committee of China’s legislature ruled on Aug. 31, 2014, that Hong Kong residents could elect their leader directly, but that the candidates would have to be approved by a nominating committee. The decision failed to satisfy democracy advocates in Hong Kong and led to the 79-day long Occupy Central protests that fall, in which demonstrators camped out on major streets in the financial district and other parts of the city.