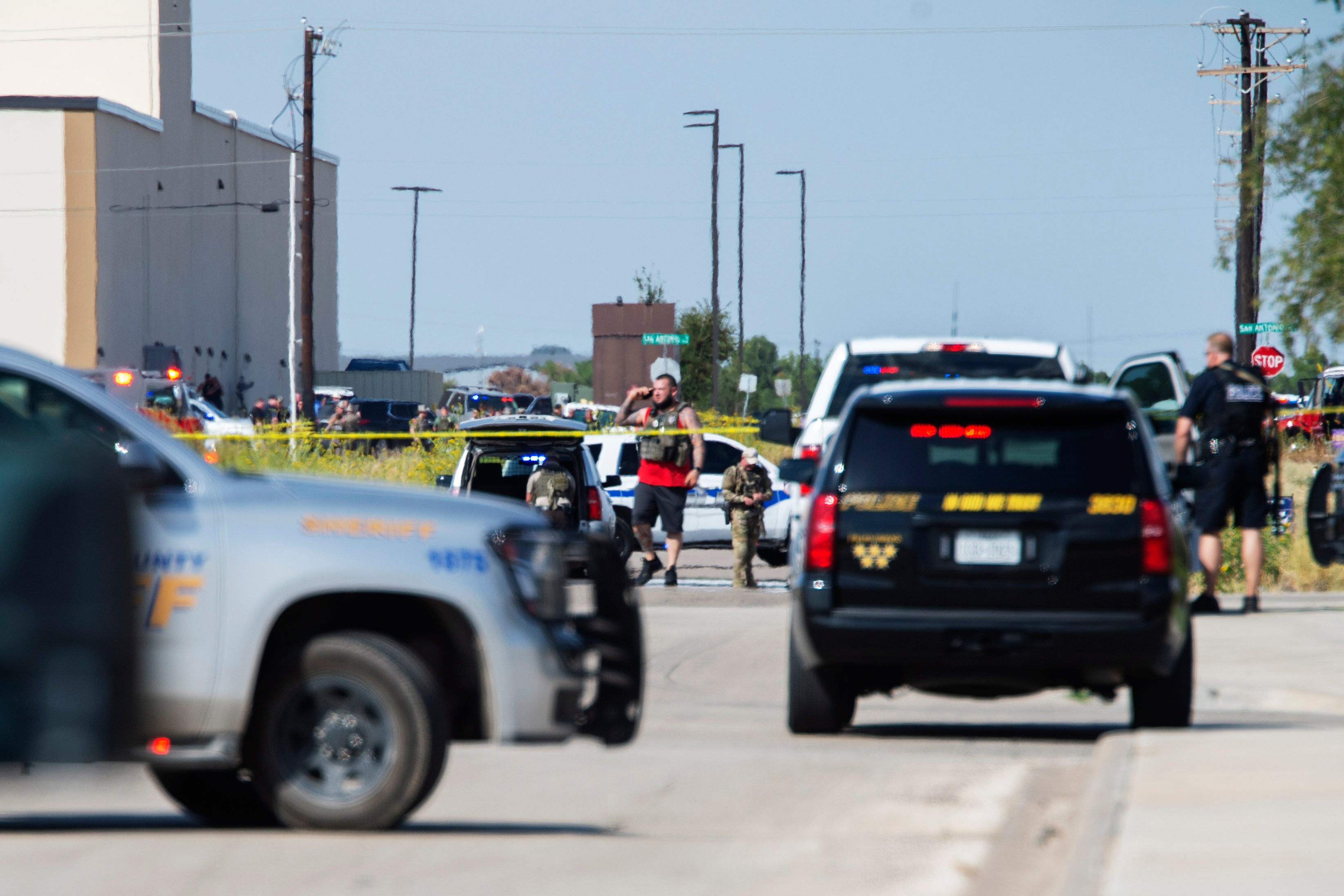 Odessa and Midland police and sheriff’s deputies surround the area behind Cinergy in Odessa, Texas, Saturday, Aug. 31, 2019, after reports of shootings. Police said there are “multiple gunshot victims” in West Texas after reports of gunfire on Saturday in the area of Midland and Odessa. (Tim Fischer/Midland Reporter-Telegram via AP)

ODESSA, Texas — At least seven people were dead after a gunman who hijacked a postal service vehicle in West Texas shot more than 20 people, authorities said Saturday. The gunman was killed and three law enforcement officers were among the injured.

The shooting comes just weeks after a gunman in the Texas border city of El Paso killed 22 people after opening fire at a Walmart. Texas Gov. Greg Abbott this week held two meetings with lawmakers about how to prevent mass more shootings in Texas. He said he would visit the area Sunday.

The shooting began with a traffic stop where gunfire was exchanged with police, setting off a chaotic afternoon during which the suspect hijacked a U.S. Postal Service vehicle and began firing at random in the area of Odessa and Midland, hitting multiple people.

Cell phone video showed people running out of the movie theater, and as Odessa television station KOSA aired breaking developments on live TV, their broadcast was interrupted by police telling them they had to clear the area.

Police initially reported that there could be more than one shooter, but Gerke says authorities now believe it was only one.

“Once this individual was taken out of the picture, there have been no more victims,” Gerke said.

Gerke described the suspect as a white male in his 30s. He did not name him but said he has some idea who he is.

Russell Tippin, CEO of Medical Center Hospital in Odessa, said 14 shooting victims were being treated at the hospital Saturday evening but he did not give their conditions or other information about the victims. Social workers and professional counselors are at the hospital to provide support to the families of shooting victims, Tippin said. He also said the hospital has been locked down for that safety of the staff and patients.

Dustin Fawcett was sitting in his truck at a Starbucks in Odessa when he heard at least six gunshots ring out less than 50 yards behind him.

At first, he thought it might have been a tire blowing but he heard more shots and spotted a white sedan with a passenger window that had been shattered. That’s when he thought, “Oh man, this is a shooting.”

Fawcett, 28, an Odessa transportation consultant, “got out to make sure everyone was safe” but found that no one had been struck by the gunfire nearby. He said a little girl was bleeding, but she hadn’t been shot, and that he found out she was grazed in the face.

Fawcett said authorities responded quickly and when police pulled out their rifles and vests he knew that “this is not a drive-by. This is something else, this is something bigger.”

Vice President Mike Pence said following the shooting that President Donald Trump and his administration “remain absolutely determined” to work with leaders in both parties in Congress to take such steps “so we can address and confront this scourge of mass atrocities in our country.”

Preparing to fly to Poland, Pence told reporters that Trump is “fully engaged” and closely monitoring the investigation. He said, “Our hearts go out to all the victims, the families and loved ones.” He also commended law enforcement “for their swift, courageous response.”

Pence said Trump has deployed the federal government in response to the shootings. He says Trump has spoken to the attorney general and that the FBI is already assisting local law enforcement.

Odessa is about 32 kilometers southwest of Midland. Both are more than 483 kilometers west of Dallas.