2 Hong Kong 'separatists' to be tried in November | Inquirer News

2 Hong Kong ‘separatists’ to be tried in November 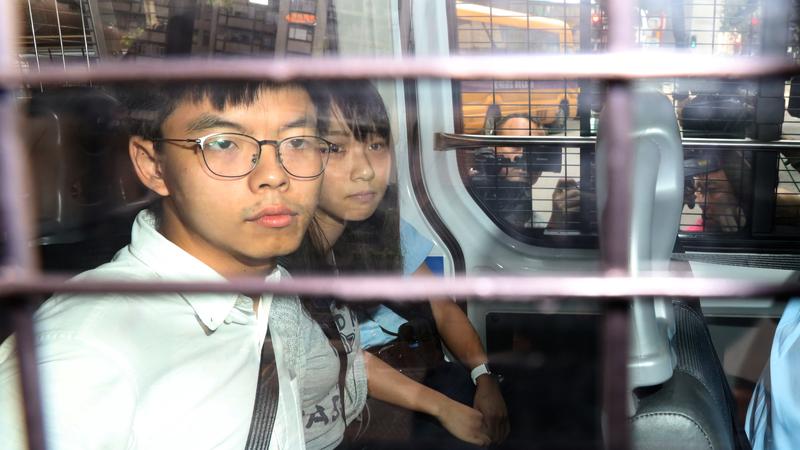 Joshua Wong Chi-fung and Agnes Chow Ting are escorted in a police vehicle to the Eastern Magistrates’ Court for court appearance in the afternoon of Aug 30, 2019, after they were arrested in the morning on the same day. (PHOTO / CHINA DAILY)

Wong and Chow, both 22, were arrested on Friday morning over involvement in besieging the police headquarters in Wan Chai on June 21. Their trial will take place on Nov 18.

Joshua Wong Chi-fung and Agnes Chow Ting were arrested on Friday morning, and currently released on bail of HK$10,000 (US$1,275) each. They are barred from traveling abroad, except for two pre-planned trips

They were released on bail of HK$10,000 (US$1,275) each. They will have to comply with curfew orders and are barred from traveling abroad, except for two pre-planned trips.

The two are from the same political organization－Demosisto－a separatist party that Wong leads. Chow is a co-founder.

Chan, founder of the Hong Kong National Party, banned for its strident “Hong Kong independence” advocacy, was arrested late Thursday night at Hong Kong International Airport as he was about to depart for Japan.

The 29-year-old was charged with rioting and assaulting a police officer for his role during protests on July 13 in Sheung Shui, a northern district in Hong Kong bordering Shenzhen.

On Aug 1, Chan, along with 10 others, were arrested in two separate crackdowns in Fo Tan, New Territories. They are suspected of possessing offensive weapons and explosives without a license. Chan’s arrest was believed to be connected to violent protests that have roiled the city since June 9. He was eventually released on bail and is due to report to police in September.

Visiting Hong Kong, Hu Xijin, editor-in-chief of Beijing-based newspaper Global Times, questioned the magistrate’s decision to grant the activists bail. By doing so, the judiciary sent a negative message to the public amid this violent situation, Hu said.

ALSO READ: Who is behind Hong Kong protests?

Hong Kong is facing unprecedented challenges. Lenient approaches to those who incite, organize and participate in illegal assemblies will hurt the city’s rule of law, he added.

Meanwhile, police clarified rumors as some members of the public questioned the timing of the arrests, which happened a day before a planned but banned rally on Saturday.

The date marks the fifth anniversary of the “831 Decision” on Hong Kong’s electoral reforms, in which the Standing Committee of the National People’s Congress provided an election framework for Hong Kong to elect its chief executive by “one person, one vote”.

During a daily news briefing on Friday afternoon, police stressed that all arrests are based on evidence. The timing of the arrests doesn’t have any implications, said Tse Chun-chung, chief superintendent of Police Public Relations Branch.

“If someone breaks the law, the police will bring him or her to justice,” Tse said.

ALSO READ: The truth behind rioters who call themselves ‘the valiant’ in HK

The police are politically neutral, he added. “We will not consider one’s background or political stands when we arrest or prosecute any offender.”

Moreover, the High Court has extended a temporary ban on any action that disrupts services of the city’s sole railway and subway operator until further notice.

The MTR was granted an interim injunction on Aug 23 to stop people from “unlawfully and willfully obstructing or interfering” with its operations.  /muf