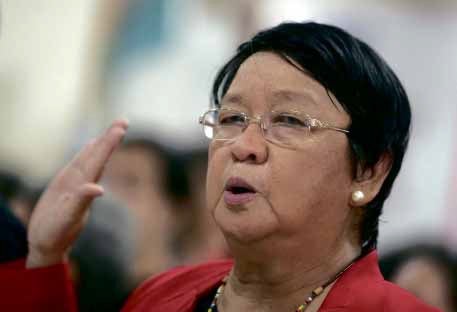 MANILA, Philippines — Rights are not rice cakes that should be divided.

This was the case posed by former Social Welfare Secretary Judy Taguiwalo on Friday, as she took up the cudgels for proponents of the Sexual Orientation and Gender Identity and Expression (SOGIE) Equality bill.

According to her, it would be narrow-minded for some people to look at the proposed law that seeks to end discrimination on the basis of sexual orientation and gender identity and expression as a measure that would harm those who do not belong to the sector.

“Hindi naman because you grant rights to a marginalized sector of society, you’re taking away rights from the majority. Hindi bibingka ang rights na paghahatian,” Taguiwalo told INQUIRER.net in an interview on the sidelines of a Civil Service Commission (CSC) forum on gender equality, disability, and social inclusion.

“It is very parochial to look at a law [that is] recognizing the rights of the marginalized sector, a law that is inclusive, as detrimental to the rights of others,” she added.

The former Cabinet member of the Duterte administration was reacting to Citizen’s Battle Against Corruption (CIBAC) party-list Rep. Eddie Villanueva’s earlier remark that the SOGIE bill “will not promote equality” but will “unduly give special rights to some members of our society at the expense of the rights of other members and to the detriment of the social order in our community.”

Among Villanueva’s reasons for opposing SOGIE bill was that, for him, it “imperils freedom of speech and religion.”

“What happens to a Christian like me and to the majority of people in this august chamber if we are to be threatened with punishment every time we share our Bible-based beliefs on matters of transgenders and homosexuals?” Villanueva said in a privilege speech on Wednesday.

“We respect the lives they (LGBTQ) choose to lead, but to make us conform to their lifestyle with the threat of punishment under our necks if we do not is in itself a violation of our own rights,” he added.

Taguiwalo, however, countered such an argument of Villanueva. She said the SOGIE bill does not take away the freedom of expression of individuals even if they express opposition to the preferences of LGBTQs.

“Ang boundaries lang kung it is a speech that encourages discriminatory actions or violent actions against the minority. We have to differentiate freedom of expression and hate speech,” she pointed out.

“It won’t also violate the non-LGBTQ (lesbian, gay, bisexual, transgender, queer) persons’ rights to their religious beliefs kasi the law does not ask them to become LGBTQ,” she added.

In a video message shown during the CSC event, Bataan 1st District Rep. Geraldine Roman reminded the public that they should not be swayed by “smear campaigns or fear-mongering” of those opposed to SOGIE bill.

She stressed that the bill is not providing for same-sex marriage and it is not “infringement” of religious beliefs.

“It is simply a right to work, to study, to use services in government and also to access commercial and public establishments and not to be insulted in the streets,” Roman said.

“‘Yan din po are the same rights that other Filipinos enjoy,” she added.

People opposing SOGIE bill “need to inform themselves and educate themselves before they take a stand on such a big issue,” a local government official said.

“I think it’s really seeking the information out and educating yourself kasi parang receive ka na lang nang receive so it’s a repository for information and there is no way to verify it unless you seek out the kind of information that is really vital and essential,” Quezon City Councilor Lena Marie Juico said in a separate interview.

Juico is the principal author of the city’s “Gender-Fair” Ordinance, which prohibits discrimination against people’s sexual orientation, gender identity, and expression. The ordinance was passed on November 28, 2014, during the term of Quezon City Mayor Herbert Bautista.

There are at least 13 versions of SOGIE Equality bill filed in the House of Representatives as there were also SOGIE bills filed at the Senate by Senators Risa Hontiveros and Imee Marcos.

In the 17th Congress, the House approved the SOGIE bill in third and final reading but its counterpart bill in the Senate only languished in the period of interpellation.

Talks about SOGIE bill were rekindled after a transgender woman was barred from using a female’s restroom in a Quezon City mall.