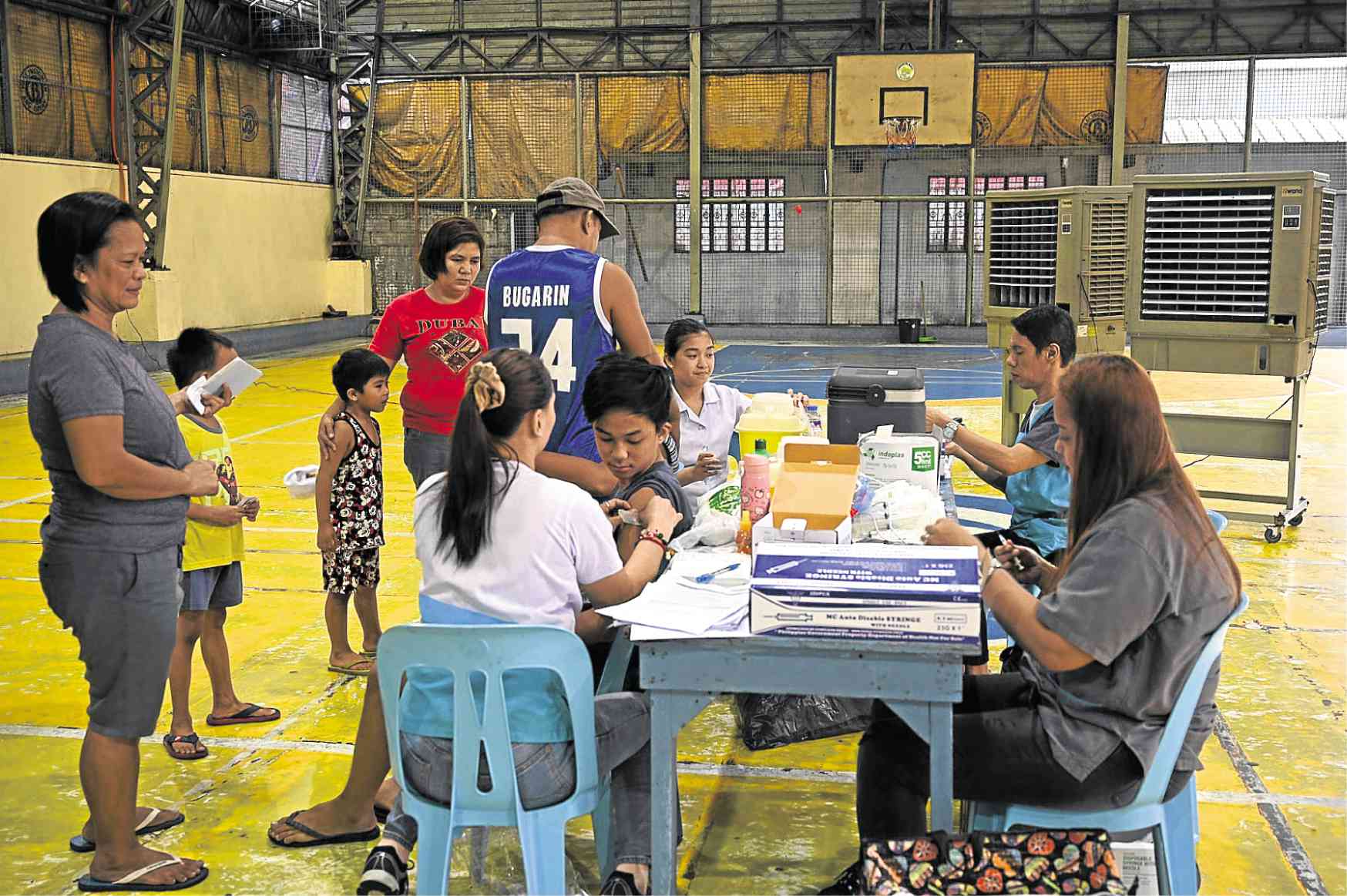 NOT JUST FOR BASKETBALL Village health workers hold a vaccination drive for children at this indoor basketball court in Manila.—AFP

In the Philippines, indoor basketball courts are central to life in tens of thousands of towns and cities, hosting everything from funerals and beauty pageants to “circumcision season.”

These so-called “covered courts” are essential in remote or poor communities, easily doubling up as refuge or evacuation center in this disaster-prone nation.

“It doesn’t get empty, it’s overused,” said Roel de Guzman, who’s in charge of such indoor courts in a village in Manila.  “It’s not just for basketball,” he added.

In one recent week, one of his courts hosted a government seminar, a class for would-be motorcycle taxi drivers, an amateur boxing match promoted by national legend Manny Pacquiao and, of course, some basketball.

A hospital in Manila recently converted its covered court into a ward to treat cases of leptospirosis, a bacterial infection transmitted through animal urine.

The fact that daily Filipino life is deeply entwined with the courts is no surprise, given basketball’s immense popularity in the country.

It’s a love affair that goes back to the 1900s when basketball was introduced to the country by American colonizers.

To this day, basketball jerseys are a ubiquitous choice of attire, while local leagues and favorite NBA teams are on TV from the capital’s wealthiest homes to the humblest bamboo shack in the provinces.

For Rafe Bartholomew, an American journalist who wrote a book on Philippine hoops culture, the omnipresence of covered courts is proof of Filipinos’ love for the game.

“It is one of the most easily recognizable examples of just how… saturated the country is with the sport of basketball and the role it plays in people’s lives,” he said.

According to the most recent government figures, there are 24,931 public covered courts scattered across the Philippines’ roughly 40,000 towns.

Building the courts is a simple and popular way for local politicians to provide services to their electorate, while building their political brand.

The courts are also the scene of deeply rooted cultural events such as circumcision season, when boys across the country have their foreskins removed en masse as a rite of passage to adulthood.

They provide a gathering spot as well, the modern equivalent of the town plaza. Public parks have been replaced, to a large extent, by covered courts as central gathering place, observed urban planner Paulo Alcazaren.—AFP