newsinfo / Nation
Nation
AS DENGVAXIA’S REGISTRATION HAS BEEN REVOKED 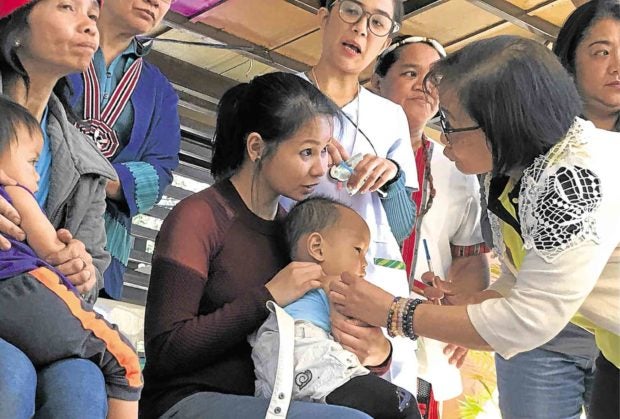 DEFYING FEAR In this February 2019 photo, some Baguio children, age 5 years old or younger, were the first recipients of a vaccine against the deadly Japanese encephalitis. INQUIRER FILE/VINCENT CABREZA

At the budget defense of the Department of Health (DOH), Garin, a former DOH chief, said she has documents proving that the JE vaccine’s registration was approved in just five days.

“I really respect the DOH… pero hindi ko po malunok na sasagutin ako ng apat na buwan because I have here the documents and attachments. The vaccine was licensed within the span of five days,” Garin said, contrary to DOH Secretary Francisco Duque III’s claim that it was approved after four months.

Duque then apologized and said he would identify accountable officers to make sure that the information that is fed to him was actually accurate.

He also said that DOH has not recalled a product due to deficient documents.

“So this runs counter with what you were doing to the dengue vaccine,” Garin quipped.

Garin had pointed out that if the Dengvaxia vaccination drive was not suspended, the recent dengue outbreak in the country could have been prevented.

Dengvaxia, a vaccine manufactured by Sanofi, was used in the massive anti-dengue vaccination program during the tail end of the Aquino administration in April 2016. Garin was the DOH Secretary at the time and was among former government officials who were charged in connection with the P3.5 billion Dengvaxia controversy.

In November 2017, Sanofi released results of its long-term follow-up study which showed that the vaccine could cause an increased risk to those who are seronegative or not yet infected with dengue. The program has since been suspended by Duque. /kga