CJ Bersamin: No need to inform SC on GTCA suspension 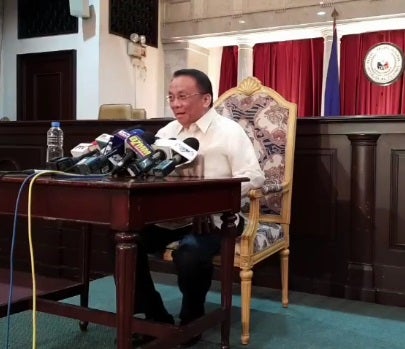 MANILA, Philippines – There is no need to inform the Supreme Court on the suspension of processing of convicts’ time allowance, Chief Justice Lucas Bersamin said.

The implementation of Republic Act 10592 or the law that increases the time allowances given to convicts to be deducted from their prison term was halted after its implementing rules and regulations were questioned before the Supreme Court.

In June this year, the Supreme Court ruled that the implementation of RA 10592 should be retroactive – meaning it will cover convicts prior to the existence of the law instead of prospective.

The high court also ordered the Department of Justice (DOJ) and the Bureau of Corrections (BuCor) to immediately implement the law.

However, upon implementation, reports of the possible release of convicted rapists and murderer former Calauan mayor Antonio Sanchez drew flak.

“That is within their discretion,” Bersamin said who opted not to make further comments as the case could again be brought to their attention.

“I cannot comment either way sa interpretation nila because that is within their discretion. It may be a different matter if anything will be brought up to our attention later on kaya hindi ako magsasalita tungkol jan,” Bersamin said.

“It is up to the Secretary of Justice kung ano yung kanyang sinakop and if anyone is not satisfied then they can come to us again, that is the procedure,” he added.

Antonio Sanchez was convicted of 2 other murders