Sanchez kin: ‘Let bullets hit us if our father is guilty’

CALAUAN, Laguna, Philippines — For the very first time, the family of convicted murderer and rapist Antonio Sanchez, a former mayor of Calauan town in Laguna, spoke up on the issue of his possible early release.

In an interview with some members of the media at the Sanchez residence in Calauan, three of the former mayor’s children stood by their father’s innocence in the rape-slay of University of the Philippines – Los Banos student Eileen Sarmenta and the murder of her companion Allan Gomez.

“To this day we still believe in his innocence,” Allan Antonio, the former mayor’s eldest child, said in Filipino. “May we and our children get hit by bullets if my daddy was really guilty. My father really had nothing to do with it. He was frameup. It was about politics.

Allan Antonio insisted that there was no need for an apology from his father.

“He’s standing by it. He really did nothing wrong,” he said in Filipino. “They’re just insisting it. Why would a person say sorry? That’s like admitting he did something wrong.” 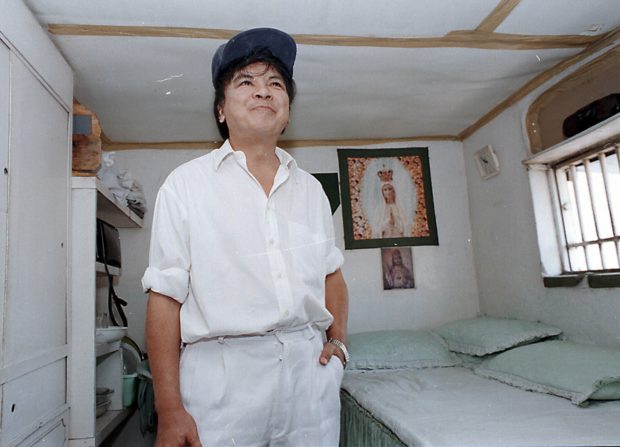 Allan Antonio explained that his father was planning to run for Laguna governor before the crime happened.

He said this could be a possible reason for his father’s frameup.

“Maybe they [his political opponents] wanted someone else to run or to take the post. So what they did — the framed up my father,” he said.

Allan Antonio also recalled that, on the day of his arrest, his father was at first merely invited to go to the police precinct.

According to him, his father, who was in the bathroom at home, said, speaking in Filipino: “OK, no problem. I will just call my lawyer.”

“I was there. There was a bit of commotion,” Allan Antonio said in Filipino. “I saw my father being forced. He was dragged down.”

“It seems everything was planted on my father,” he added.

‘We deserve an apology’

The Sanchez family also sought an apology after their father was imprisoned for a crime that he did not commit.

“In fact, you should all be the ones to apologize to us,” he said. “You all had him imprisoned for 26 years without sin.”

Calling the justice system “one-sided,” Allan Antonio questioned why his father was being prevented from being released despite being qualified for it under the law, particularly Republic Act No. 10592, which increased the good conduct time allowance (GCTA) given to inmates.

Allan said that his father was being “singled out” as he made his message short and clear — “The law applies to all.”

Hard for the family

Allan Antonio said that his father’s imprisonment was not the only thing that made things hard for their family.

“It’s so hard for our family to accept it. And there are members of media and netizens who think they know what really happened,” he said. “Why don’t you go to Calauan, investigate. Ask around about the real personality of my father.”

Sanchez is one of more than 10,000 inmates who may benefit from Republic Act No. 10592, which increased the GCTA given to inmates.

The GCTA provides additional time to be deducted from an inmate’s prison sentence as a reward for good behavior.

Reports on the issue, however, sparked outrage among the public and government officials alike who questioned the grounds for the eligibility of Sanchez for early release.

They cited reported incidents of the former mayor’s violations at the New Bilibid Prison.

In 2010, P1.5 million worth of crystal meth, locally known as shabu, was reportedly found in Sanchez’s prison cell. In 2015, household appliances — namely, a flat-screen television set and an air conditioner — were discovered in his cell.

The Bureau of Corrections (BuCor) later clarified that Sanchez might not be qualified after all for early release because of those violations.

On Saturday, the Department of Justice said it would inform the Supreme Court of the need to suspend the processing of the early release for good conduct of thousands of prisoners, including Sanchez.