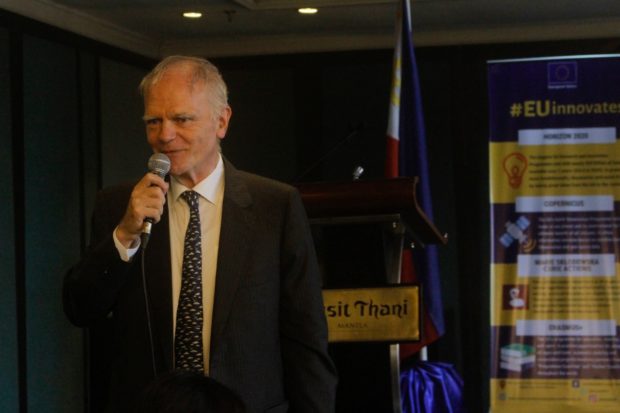 MANILA, Philippines – Saying that it is against their legislation, outgoing European Union (EU) Ambassador Franz Jessen has denied the allegation that the organization is financially supporting the Communist Party of the Philippines (CPP) and its armed wing, the New People’s Army (NPA).

Jessen said that as the Communist Party of the Philippines (CPP) has been listed as a terrorist group by the EU, any assistance given to it will be a violation of the organization’s legislation.

“For the EU, the CPP has been in our list of terrorist organizations.  If in any form we were seen supporting that, we would be violating our legislation on terrorists,” he said in a breakfast with Manila-based reporters on Tuesday.

Esperon claims the EU funds were supposedly being used to support terrorist activities of the NPA.

A probe of the allegation was conducted by the Philippine government and the EU with Presidential Communications Undersecretary Lorraine Badoy claiming that the EU and Belgium have nearly finished cutting ties with alleged CPP fronts.

READ: EU to probe if funds used by Reds

“It’s not baseless, the Philippines is a big country and some of the activities that are being supported are far away.  The government has information that we do not have, so these would be helpful,” he explained.

“We do due diligence, we have a number of requirements for NGOs, we also have a financing check […] We don’t want to support a terrorist organization,” he added.

The EU and President Rodrigo Duterte do not have the smoothest of relations, especially after Duterte called the organization out for commenting on the administration’s war against illegal drugs.  He also called on Filipinos to listen only to him, and not to “idiots” inside the EU.

Duterte also told EU delegates to “go to hell” for imposing ‘white’ and ‘crazy’ values over Filipinos supposedly in exchange for aid.

READ: Duterte lambasts EU anew over criticism of his war on drugs drugs

READ: EU has never ceased to be ‘imperialist’ – Duterte