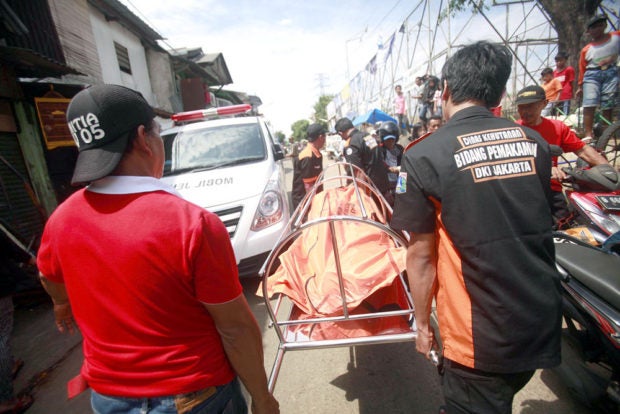 A dead body is carried to an ambulance. A man was denied an ambulance to carry his dead nephew in Tangerang. (The Jakarta Post/Iqbal Yuwansyah)

JAKARTA — Supriyadi, 40, was forced to carry home on Friday the body of his 9-year-old nephew, Muhammad Husen, who was found drowned in the Cisadane River in Tangerang, Banten, Indonesia, after a local community health center (Puskesmas) refused to provide an ambulance.

The health center in Cikokol District refused to use an ambulance on the grounds that the ambulance was only for the sick and not allowed to carry bodies.

The man, who worked as a security guard at a hospital, admitted that he did not blame the Puskesmas for refusing to use an ambulance, adding that some of the Puskesmas’ workers had tried to help him by giving him telephone numbers for hearse services.

“It’s not a worry, I understand that a Puskesmas has its work procedures,” Supriyadi said at his house in Kampung Kelapa Indah on Sunday, as quoted by kompas.com.

Supriyadi recalled that when lifting his nephew’s body and walking to the highway, he had an idea to carry the body on a motorcycle, but as he was about to cross the road, a kind motorist offered help to carry the body.

The scene of Supriyadi carrying his nephew’s body on the road was recorded and went viral on social media. The video raised public concern on various social media platforms.

“I have given an order to immediately remodel the SOP and disseminate the information of the new rules to health centers for the sake of the community in emergency situations,” Arief said.

“Of course, we have to provide hearse services at health centers. But if they are not available in an emergency situation, an ambulance should be an option,” he added.

He said that this incident was a lesson for the authorities and bureaucrats in the city, in which they should always work with empathy.