Martial law museum to rise by 2022, on 50th commemoration 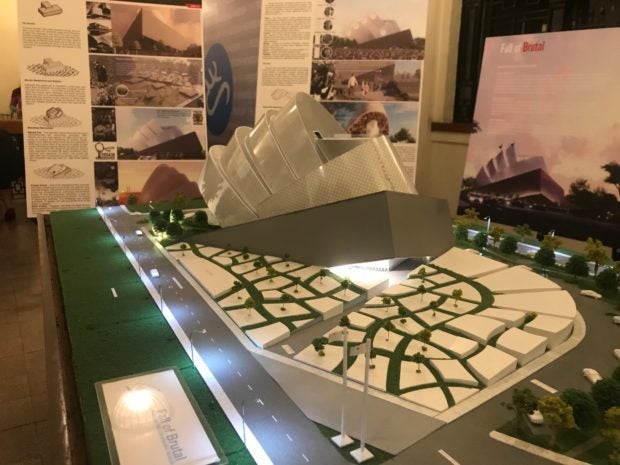 REMINDER OF DARK DAYS A scale model of the Freedom Memorial Museum to be built in Diliman, Quezon City, to commemorate the service and sacrifice of victims of martial law. —NIKKAG. VALENZUELA

MANILA, Philippines — When visitors enter the Freedom Memorial Museum in Quezon City in 2022, the 50th anniversary of Ferdinand Marcos’ martial law regime, they will go through a narrow pathway that evokes the feeling of walking among tombs.

When they reach the museum — a building that will commemorate the service and sacrifice of the victims of martial law — they will enter through bars.

“During the years of martial law, it felt like you were imprisoned in your own country. We want the spectators to feel that,” said Mark Anthony Pait, the 29-year-old lead architect of the Freedom Memorial Museum.

From the bars, visitors will enter the Hall of Agony where they will find displays depicting the different methods of torture employed by henchmen of the dictator.

Visitors will walk through a seemingly endless passageway that leads to Memorial Hall, a room where the names of the victims of human rights abuses are enshrined.

At the center of it all is the Aviation Security Command (Avsecom) van that took Sen. Benigno “Ninoy” Aquino Jr. to an Army hospital in Fort Bonifacio after he was shot at Manila International Airport in 1983.

The architects of the “Fall of Brutal” designed a museum that would take visitors on a journey from the dark days of martial law to the restoration of democracy in the Philippines.

The seven-story building will be shaped like a clenched fist rising from a brutal edifice.

According to Pait, the clenched fist has become a universal symbol for resistance, from the civil rights movement in the United States to the First Quarter Storm in 1970s Philippines.

Brutal architecture, meanwhile, was common among government structures built during the Marcos dictatorship.

To soften the clenched fist symbol, the architects incorporated flower petals, a reminder that democracy was won not through brute force but through a bloodless revolution. During the February 1986 People Power Revolution, protesters handed flowers to soldiers.

“Fall of Brutal”—designed by Pait, Wendell Crispo, Mark Angelo Bonita and Audie Palma—bested more than 100 design submissions by architects from all over the Philippines.

Five semifinalists were selected after two rounds of deliberation. Each semifinalist received P250,000.

Pait and his team were proclaimed winners during the awarding ceremony at the National Museum of Fine Arts on Aug. 21. They received P1 million.

The team of four freelance architects and designers were not yet born during the Marcos dictatorship, so they banked on research when they conceptualized the winning project in May.

“We first heard of martial law when we were in grade school. We [had forgotten all about it by the time we were already] in college. We were so focused on our works and our designs then that we weren’t engaged in public discourse,” said Pait, a graduate of Technological University of the Philippines.

“We saw that our research was our greatest foundation. From there our eyes were opened to what happened during the Marcos era,” he added.

Carmelo Crisanto, HRVVMC executive director, told the Inquirer that many of the competition participants were born after the People Power Revolution.

“As we’re running this competition, one architect said to his younger team: ‘We would build something with China Airlines and the Avsecom van.’ And the kids looked stunned, they couldn’t find the connection. This is the story they share … after they made their research, they cried. This process in design competition brought many young architects researching back to our past and trying to express it in architectural form about the struggles of the Philippines for freedom and democracy and human rights,” Crisanto said.

The Freedom Memorial Museum will house 14 galleries that will focus on human rights violations.

Most galleries will be R-rated, Crisanto said, and the challenge to the curators will be to “explain this part of our history to the kids without making it a zombie horror story.”

The P500-million museum will be built on a 1.4-hectare property along C.P. Garcia Avenue on the University of the Philippines (UP) Diliman campus.

The funds for building the museum will be sourced from interest on money recovered from the Marcoses’ Swiss bank accounts.

The HRVVMC, he said, initially planned to build the museum in Bonifacio Global City in Taguig. When that proved not possible, the commission turned to Ninoy Aquino Parks and Wildlife Center in Quezon City.

“Perhaps this was the most logical site, we shall be building this grand edifice [on] the UP Diliman campus, [which is] a stone’s throw away from where the barricades of UP activists of the Diliman Commune were set up,” Gascon said.

The museum is planned to be fully operational by Sept. 21, 2022, the 50th anniversary of the declaration of martial law, Gascon said.

Finding a site and creating a design were just the beginning, he added.

Important tasks like curating exhibits remain to be done, he said.

He said the HRVVMC wanted to create exhibits that would spark national conversation so that the younger generations would learn about the past.

“What is the use of a grand and iconic edifice if it is unable to fulfill its principal mission and achieve its critical purpose? Today we are all living in a posttruth world where the traditional gatekeepers of truth—our media, our schools, our museums—have all either been torn down or broken or are being consciously undermined,” he said.

“There is a constant stream of disinformation and misinformation that has penetrated and permeated not just social media but also all other major arenas of discourse … to the extent that our current and future generations of youth are confused or are unclear on what had occurred during the dark days of martial law. The future of our nation and our world should not be determined by flat earthers, Holocaust deniers and historical revisionists,” he added.