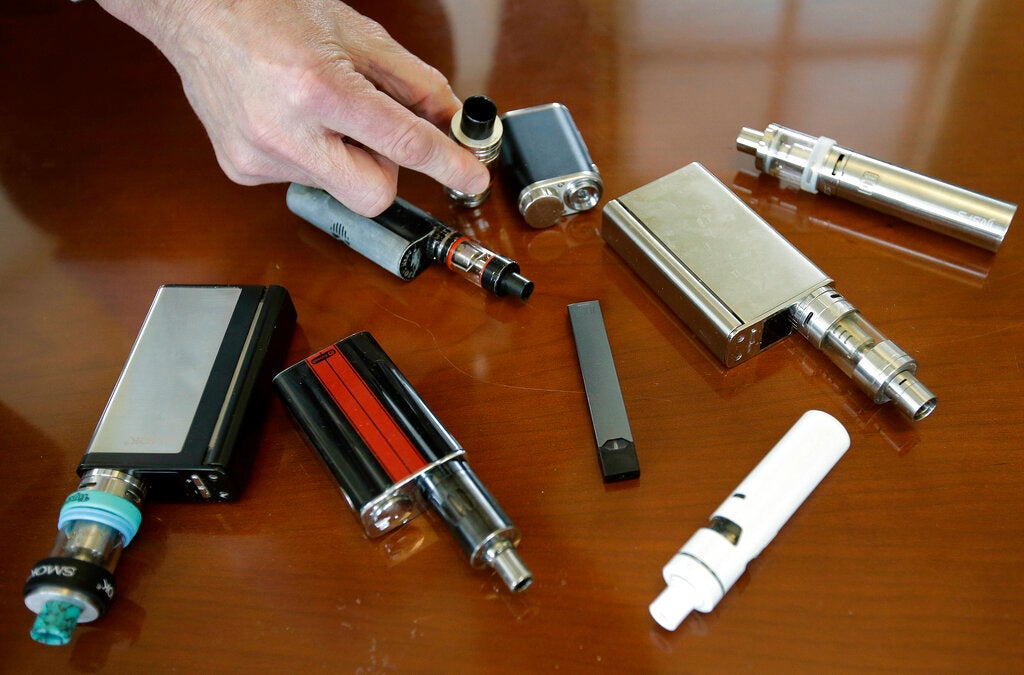 Marshfield High School Principal Robert Keuther displays vaping devices that were confiscated from students in such places as restrooms or hallways at the school in Marshfield, Massachusets. (AP)

CHICAGO  — Health officials said Friday that an Illinois patient who contracted a serious lung disease after vaping has died and that they consider it the first death in the United States linked to the smoking alternative that has become popular with teens and young adults.

The Illinois Department of Public Health the adult patient was hospitalized after falling ill following vaping, though it didn’t give other information about the person, including the patient’s name, age, hometown or date of death.

Officials with the Centers for Disease Control and Prevention said Friday that 193 people in 22 states have contracted severe respiratory illnesses after vaping. However, they said a clear-cut common cause of the illnesses hasn’t been identified and that they are being called “potential cases” that are still under investigation.

All of the sickened have been teens or adults who had used an electronic cigarette or some other kind of vaping device. Doctors say the illnesses resemble an inhalation injury, with the lungs apparently reacting to a caustic substance. So far, infectious diseases have been ruled out.

The illnesses have been reported since late June, but the total count has risen quickly in the past week. That may be partly because cases that weren’t initially being linked to vaping have begun to be grouped that way.

Among the newest reports are two in Connecticut, four in Iowa and six in Ohio. Health officials are asking doctors and hospitals to tell state health officials about any possible vaping-related lung disease cases they encounter.

In its news release, the Illinois agency said the number of people who contracted a respiratory illness after vaping had doubled in the past week, to 22.

“The severity of illness people are experiencing is alarming and we must get the word out that using e-cigarettes and vaping can be dangerous,” IDPH Director Dr. Ngozi Ezike said in the release.

Electronic cigarettes have been described as a less dangerous alternative to regular cigarettes, but health officials have been worried about kids using them. Most of the concern has focused on nicotine, which health officials say is harmful to developing brains and might make kids more likely to take up cigarettes.

But some vaping products have been found to contain other potentially harmful substances, including flavoring chemicals and oils used for vaping marijuana, experts say.

A number of the people who got sick had vaped products containing THC, the high-inducing ingredient in marijuana. CDC officials said they do not have a breakdown of how many of the sick people vaped THC.

The American Vaping Association, an advocacy group, issued a statement arguing that “tainted, black market THC products” are to blame. The group called on federal officials to clear nicotine vaping products of suspicion.

Matthew Myers, the head of the Campaign for Tobacco-Free Kids, said the illnesses underscore why the U.S. Food and Drug Administration should be looking into e-cigarettes and their impact on health before they can be sold to the public.

“Investigators haven’t identified any specific product or compound that is linked to all of the cases,” Ileana Arias, a CDC official who oversees non-infectious disease, said during a Friday call with reporters. She also said the sickened might be dealing with different illnesses that have similar symptoms.