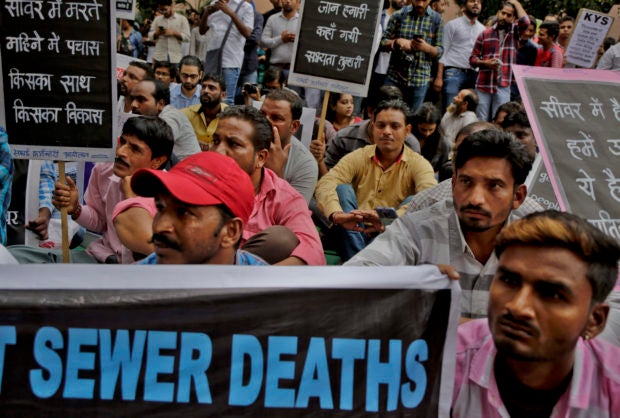 In this Tuesday, Sept. 25, 2018, file photo, sewer cleaning workers and others sit during a protest near the Indian parliament calling for an end to deaths due to sewer cleaning in New Delhi, India. Five sanitation workers have been asphyxiated by fumes while cleaning a septic tank on the outskirts of the Indian capital. The deaths occurred Thursday, Aug. 22, 2019, in the northern town of Ghaziabad. Placard on left reads “fifty die in a month cleaning sewers.” (AP Photo/R S Iyer, File)

LUCKNOW, India — Five sanitation workers were asphyxiated by fumes while connecting sewer lines with an underground drainage system on the outskirts of the Indian capital, an official said on Friday.

One worker went down into the sewer lines and his four co-workers followed to check on him when he did not come back. All five were found unconscious and later declared dead at a hospital, Pandey said.

The government says 819 people have died in the last 25 years from cleaning sewers with more than 30 deaths reported every year. /kga