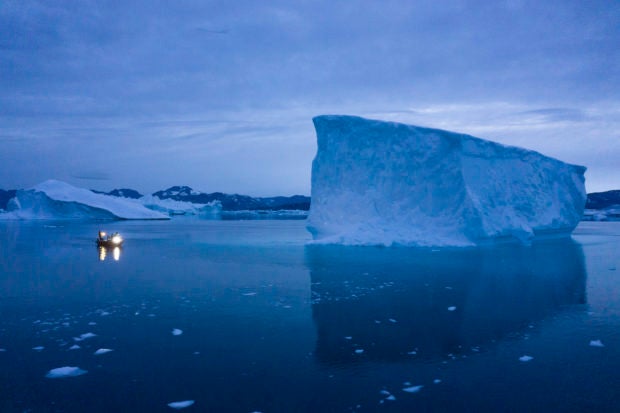 In this August 15, 2019, file photo, a boat navigates at night next to large icebergs in eastern Greenland. As warmer temperatures cause the ice to retreat the Arctic region is taking on new geopolitical and economic importance, and not just the United States hopes to stake a claim, with Russia, China, and others all wanting in. (AP Photo/Felipe Dana, File)

TASIILAQ, Greenland — From a helicopter, Greenland’s brilliant white ice and dark mountains make the desolation seem to go on forever. And the few people who live here – its whole population wouldn’t fill a football stadium – are poor, with a high rate of substance abuse and suicide.

One scientist called it the “end of the planet.”

When U.S. President Donald Trump floated the idea of buying Greenland, it was met with derision, seen as an awkward and inappropriate approach of an erstwhile ally.

But it might also be an Aladdin’s Cave of oil, natural gas, and rare earth minerals just waiting to be tapped as the ice recedes.

The northern island and the rest of the Arctic aren’t just hotter due to global warming. As melting ice opens shipping lanes and reveals incredible riches, the region is seen as a new geopolitical and economic asset, with the U.S., Russia, China, and others wanting in.

“An independent Greenland could, for example, offer basing rights to either Russia or China or both,” said Fen Hampson, the former head of the international security program at the Centre for International Governance Innovation think tank in Waterloo, Ontario, who is now a professor at Carleton University.

He noted the desire by some there to secede as a semi-autonomous territory of Denmark.

“I am not saying this would happen, but it is a scenario that would have major geostrategic implications, especially if the Northwest Passage becomes a transit route for shipping, which is what is happening in the Russian Arctic.”

In April, Russian President Vladimir Putin put forward an ambitious program to reaffirm his country’s presence in the Arctic, including efforts to build ports and other infrastructure and expand its icebreaker fleet. Russia wants to stake its claim in the region that is believed to hold up to one-fourth of the Earth’s undiscovered oil and gas. 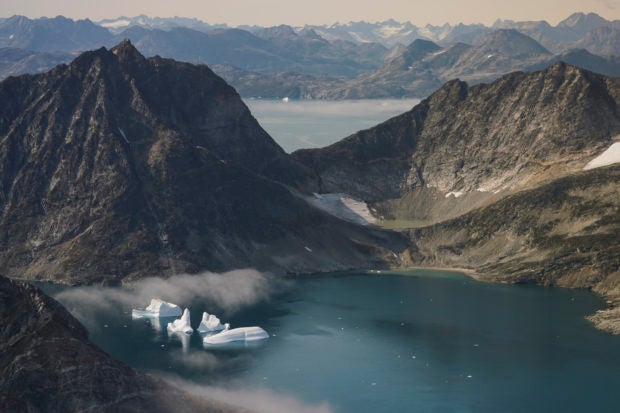 In this August 14, 2019, file photo, icebergs are photographed from the window of an airplane carrying NASA scientists as they fly on a mission to track melting ice in eastern Greenland. As warmer temperatures cause the ice to retreat the Arctic region is taking on new geopolitical and economic importance, and not just the United States hopes to stake a claim, with Russia, China, and others all wanting in. (AP Photo/Mstyslav Chernov, File)

China sees Greenland as a possible source of rare earths and other minerals and a port for shipping through the Arctic to the eastern U.S. It called last year for joint development of a “Polar Silk Road” as part of Beijing’s Belt and Road Initiative to build railways, ports, and other facilities in dozens of countries.

But while global warming pushes the cold and ice farther north each year, experts caution that the race to the Arctic is an incredibly challenging marathon, not a sprint.

The melting of the Greenland ice sheet creates uncertainty and danger for offshore oil and gas developers, threatening rigs and ships.

“All that ice doesn’t suddenly melt; it creates icebergs that you have to navigate around,” said Victoria Herrmann, managing director of the Arctic Institute, a nonprofit focused on Arctic security.

On the other hand, while mining in Greenland has been expensive due to the environment, development costs have fallen as the ice has melted, making it more attractive to potential buyers, she said.

Strategically, Greenland forms part of what the U.S. views as a key corridor for naval operations between the Arctic and the North Atlantic. It is also part of the broader Arctic region, considered strategically important because of its proximity to the U.S. and economically vital for its natural resources.

Hampson noted it was an American protectorate during World War II when Nazi Germany occupied Denmark, and the U.S. was allowed to build radar stations and rent-free bases on its territory after the war. That includes today’s Thule Air Force Base, 1,200 kilometers (745 miles) south of the North Pole.

After the war, the U.S. proposed buying Greenland for $100 million after flirting with the idea of swapping land in Alaska for parts of the Arctic island. The U.S. also thought about buying Greenland 80 years earlier.

Trump “may not be as crazy as he sounds despite his ham-fisted offer, which clearly upset the Danes, and rightly so,” Hampson said.

Greenland is part of the Danish realm along with the Faeroe Islands, another semi-autonomous territory, and has its own government and parliament. Greenland’s 56,000 residents got an extensive home rule in 1979 but Denmark still handles foreign and defense policies, with an annual subsidy of $670 million.

Its indigenous people are not wealthy, and vehicles, restaurants, stores and basic services are few.

Trump said Sunday he’s interested in Greenland “strategically,” but its purchase is “not No. 1 on the burner.” 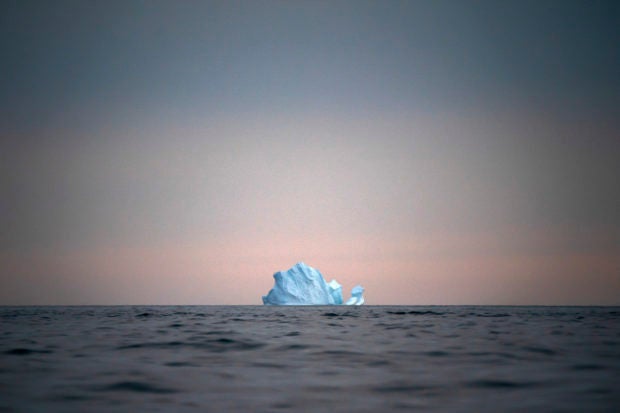 In this August 15, 2019, file photo, a large Iceberg floats away as the sun sets near Kulusuk, Greenland. As warmer temperatures cause the ice to retreat the Arctic region is taking on new geopolitical and economic importance, and not just the United States hopes to stake a claim, with Russia, China, and others all wanting in. (AP Photo/Felipe Dana, File)

Although Danish Prime Minister Mette Frederiksen called Trump’s idea to purchase Greenland an “absurd discussion,” prompting him to call her “nasty” and cancel an upcoming visit to Copenhagen, she also acknowledged its importance to both nations.

“The developments in the Arctic region calls for further cooperation between the U.S. and Greenland, the Faeroe Islands and Denmark,” she said. “Therefore I would like to underline our invitation for stronger cooperation on Arctic affairs still stands.”

Greenland is thought to have the largest deposits outside China of rare earth minerals used to make batteries and cellphones.

Such minerals were deemed critical to economic and national security by the U.S. Interior Department last year, and as demand rises “deposits outside of China will be sought to serve as a counterbalance to any market control that could be exerted by a single large producer,” said Kenneth Medlock, senior director at the Center for Energy Studies at Rice University.

Off Greenland’s shores, the U.S. Geological Survey estimates there could be 17.5 billion undiscovered barrels of oil and 148 trillion cubic feet of natural gas, though the remote location and harsh weather have limited exploration. Around the Arctic Circle, there’s potential for 90 billion barrels of oil.

Only 14 offshore wells were drilled in the past 40 years, according to S&P Global Analytics. So far, no oil in exploitable quantities has been found.

“It’s very speculative, but in theory, they could have a lot of oil,” said Michael Lynch, president of Strategic Energy & Economic Research Inc. “It’s perceived as being the new Alaska, where the old Alaska was thought to be worthless and turned out to have huge reserves. And it’s one of the few places on Earth that’s lightly populated, and it’s close to the U.S.”

Michael Byers, an Arctic expert at the University of British Columbia, suggests there are better approaches for Washington than the politically awkward suggestion of purchasing Greenland.

“There’s no security concern that would be dealt with better if Greenland became a part of the United States. It’s part of the NATO alliance,” he said. “As for resources, Greenland is open to foreign investment. Arctic resources are expensive and that is why there is not more activity taking place. That’s the barrier. It’s not about Greenland restricting access.”

That’s been the approach taken by China, which has had mixed success. Greenland officials have visited China to look for investors but Beijing’s interest also has provoked political unease. 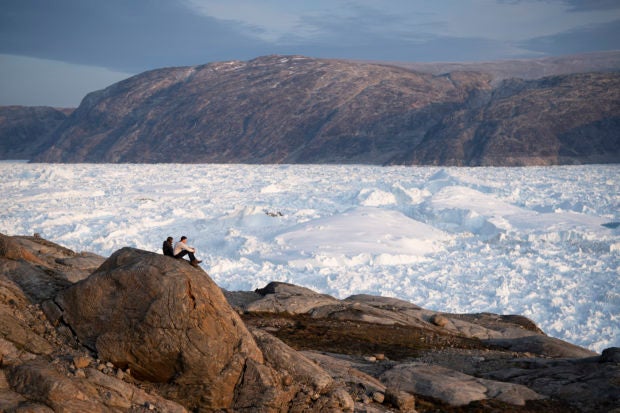 In this August 16, 2019, file photo, NYU student researchers sit on top of a rock overlooking the Helheim glacier in Greenland. As warmer temperatures cause the ice to retreat the Arctic region is taking on new geopolitical and economic importance, and not just the United States hopes to stake a claim, with Russia, China, and others all wanting in. (AP Photo/Felipe Dana, File)

In 2016, Denmark reversed plans to sell Groennedal, a former U.S. naval base that the Danish military had used as its command center for Greenland after a Hong Kong company, General Nice Group, emerged as a bidder, according to defencewatch.dk, a Danish news outlet.

Beijing’s biggest Greenland-related investment to date is an ownership stake by a Chinese company in Australia-based Greenland Minerals Ltd., which plans to mine rare earths and uranium.