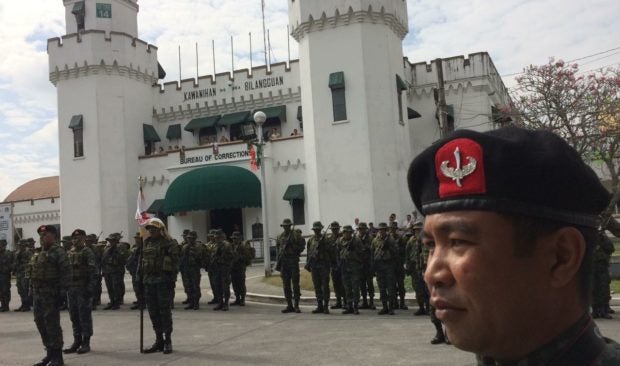 Outgoing SAF stands in formation for the last time in front of the New Bilibid Prisons before a new command battalion replaces them today. Marianne Bermudez / INQUIRER

MANILA, Philippines – Senator Bong Go has advised former mayor and rape-slay convict Antonio Sanchez of Calauan, Laguna to stop dreaming about leaving jail, saying that the New Bilibid Prison might be a safer place for him.

Reports came out on Tuesday that Sanchez was one of the over 10,000 inmates who could be released soon, after obtaining good conduct time allowance (GCTA) in accordance with Republic Act 10592.

The former local executive was convicted for raping student Eileen Sarmenta and masterminding the death of Sarmenta’s friend Allan Gomez in 1993.

Go’s opinion contradicted with his party mate and fellow Senator Ronald dela Rosa who said that Sanchez should be given a second chance if the government offices believe so. Dela Rosa also made a remark afterward saying that if it were for him, Sanchez should have been subjected to the death penalty.