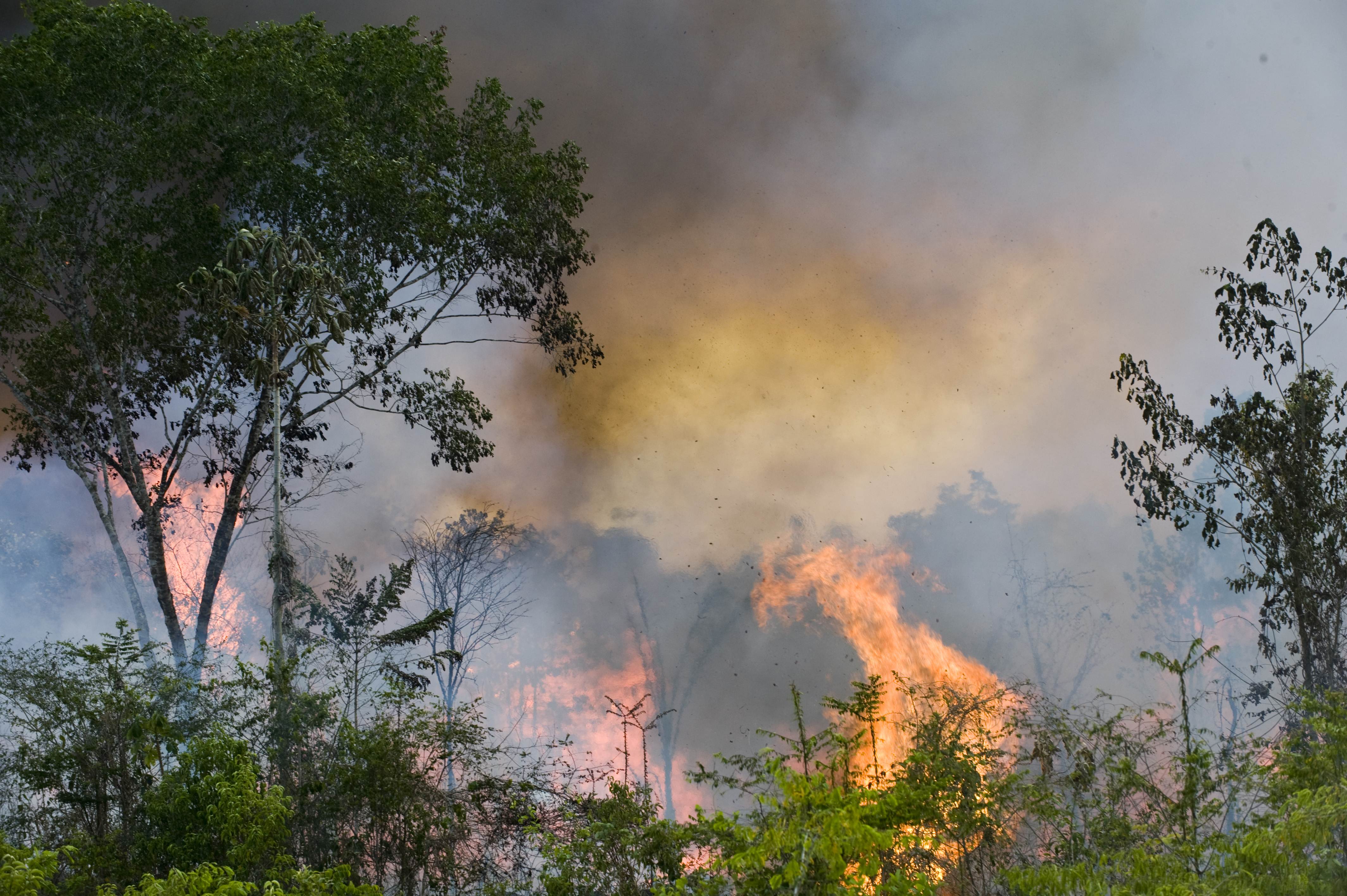 Picture taken on December 1, 2009 while a fire burns part of the 500 thousand hectares of the Tapajos National forest along route BR163 between Santarem and Cuiaba, in the Amazon region in northern Brazil. (AFP)

SALVADOR, Brazil–Wildfires in the Amazon rainforest in northern Brazil have ignited a firestorm on social media, with President Jair Bolsonaro on Wednesday suggesting green groups started the blazes.

Images of fires purportedly devouring sections of the world’s largest rainforest have gone viral on Twitter. #PrayforAmazonas is the top trending hashtag in the world on Wednesday, with more than 249,000 tweets.

“No matter how successful we are, if our Earth dies, we all die,” posted one Twitter user.

Another wrote: “Send your prayers to the Amazon and to the planet, we will need it.”

Some of the images, however, showed fires in the Amazon dating as far back as 1989 or even in other countries such as the United States or India, AFP’s fact-check service found.

Official figures show nearly 73,000 forest fires were recorded in Brazil in the first eight months of the year — the highest number for any year since 2013. Most were in the Amazon.

That compares with 39,759 in all of 2018, according to the embattled National Institute for Space Research (INPE), which has been in Bolsonaro’s cross-hairs since it released data showing a surge in deforestation in recent months.

The head of INPE, the agency tasked with monitoring forest clearing, was sacked over the figures.

While it was not possible Wednesday to measure the size of the area affected by fires, thick smoke in recent days has blanketed several cities, including Sao Paulo, and caused a commercial flight to be diverted.

Forest fires tend to intensify during the dry season, which usually ends in late October or early November, as land is cleared to make way for crops or grazing.

But the WWF has blamed this year’s sharp increase on accelerating deforestation in the Amazon, which is seen as crucial to keeping climate change in check.

“Historically, in this region, the use of fire is directly linked to deforestation as it is one of the techniques for tree clearing,” WWF said in a statement.

Bolsonaro hit back Wednesday, saying “criminal action by those NGOs, to call attention against me, against the Brazilian government” following funding cuts may be the reason for the forest fires.

“This is the war that we are facing,” Bolsonaro told reporters.

“The fires were lit in strategic places. All the indications suggest they went there to film and start fires. That’s what I feel.”

The Amazon Forest produces more than 80 percentage the world’s oxygen and is home to more than half of the world’s species of plants, animals and insects. It has been burning for 3 weeks and we have just found out about it! The lungs of the Earth are on fire. #PrayForTheAmazon pic.twitter.com/poiDERvq3D

Bolsonaro’s comments come as Brazil hosts a UN regional meeting on climate change in the northeastern city of Salvador ahead of December’s summit in Chile.

The 25th UN Conference on Climate Change (COP25) was originally planned for Brazil, but the country pulled out, citing impossible objectives.

Activists held a protest in the city where they denounced Bolsonaro’s latest accusation as “absurd”.

“The fires are the consequence of a policy of environmental devastation, of support for agribusiness, of increasing pastures,” Camila Veiga of the Brazilian Association of NGOs told AFP.

Speaking on the sidelines of the week-long workshop, Environment Minister Ricardo Salles defended the government’s efforts to prevent illegal deforestation.

“All the rules on illegal deforestation have been upheld, all strategies have continued to be enforced,” Salles said.

“Unfortunately both the states and the federal government suffer because of the economic crisis, budget cuts, which hinders… enforcement operations.”

The forest fires have fueled criticism of Bolsonaro’s anti-environmentrhetoric, which activists blame for emboldening loggers, miners and farmers in the Amazon.

Salvador mayor Antonio Carlos Magalhaes told AFP that, if necessary, “political forces” in Brazil would work “to block any attempt at radical or extreme decisions” on the environment by Bolsonaro’s government.

Norway joined Germany on Thursday in halting Amazon protection subsidies, accusing Brazil of turning its back on the fight against deforestation.

Worsening relations between Brazil and Europe has worried the powerful agriculture sector, which fears a backlash from its key markets.