Hong Kong police in standoff with protesters after sit-in

HONG KONG – Hong Kong riot police faced off briefly with protesters occupying a suburban train station Wednesday evening following a commemoration of a violent attack there by masked assailants against supporters of the anti-government movement. 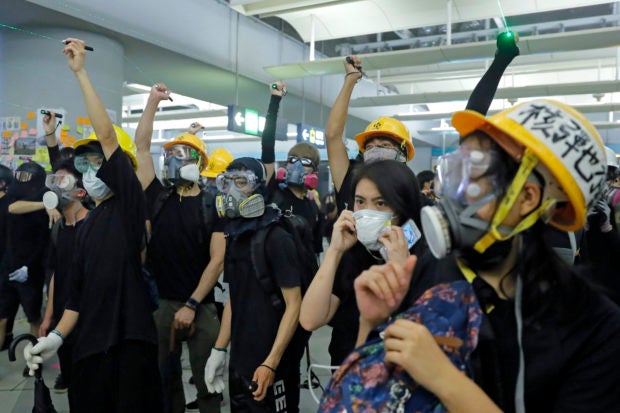 Near the end of the event, the police began what they called a “dispersal operation, using minimum force” after some protesters blocked roads and flashed laser pointers at officers.

Police with riot shields faced off at the station entrance against a group of remaining protesters, who sprayed a firehose and spread soap on the floor to slow a police approach, while piling up trash bins, a wheelchair and umbrellas in a makeshift blockade.

They also discharged fire extinguishers, creating a cloud obscuring visibility. The station’s entrance shutters were lowered, barricading the protesters inside.

The confrontation ended without further incident, as police retreated and protesters left on trains.

The black-clad protesters flooded earlier into Yuen Long station to commemorate the July 21 rampage by a group of men suspected of organized crime links, in what was a shocking escalation of the city’s summer of protest.

The protesters observed a moment of silence, then covered their right eyes, a reference to a woman who reportedly suffered a severe eye injury from a police projectile.

Many sat on the station floor, while others walked slowly around the concourse in a protest march.

Chanting “Liberate Hong Kong” and “Revolution of our times,” they also drew attention to what they say is the lack of progress by police in investigating the attack, which left both protesters and bystanders injured. Protesters have accused the police of colluding with the attackers by delaying their response, but authorities have denied it.

Police say they have arrested 28 people in connection with the attack but haven’t charged anyone yet. They say some of those arrested have triad links, referring to organized crime syndicates.

The anti-government protests began more than two months ago and have spiraled into a political crisis, with supporters demanding full democracy and an investigation into alleged police brutality.

The Yuen Long attack came after a massive protest was winding down in July. The assailants, all clad in white in contrast to the protesters’ black, swung wooden poles and steel rods, injuring 45 people.

Also Wednesday, China said a staffer at the British consulate in Hong Kong has been given 15 days of administrative detention in the neighboring mainland city of Shenzhen for violating regulations on public order.

The case is stoking fears that Beijing is extending its judicial reach to semi-autonomous Hong Kong. /gsg