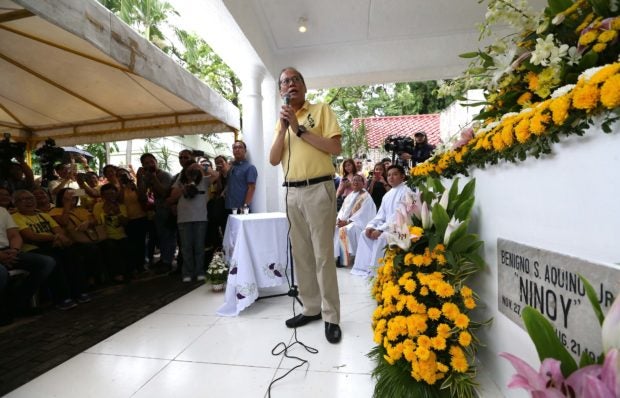 MANILA, Philippines — Former President Benigno S. Aquino III was not able to attend Wednesday’s commemoration of his father’s 36th death anniversary because “he’s not okay,” his sister, Kris, has revealed.

“I was told to not give many details. Actually, I was told to say: ‘Sabihin mo na lang hindi [ako] sumipot dahil nandito ka,” Kris told relatives, friends, and supporters during a program at her father’s resting place at the Manila Memorial Park in Parañaque City.

“But I want you to know the truth and with me, you get the truth. So, he’s not okay. I’m not at liberty to say what’s wrong with him because that’s up to him,” she further said.

Kris also said the past three years had been “tough” on the former president.

“These three years have been tough on him. I’m sure Dad will forgive me if I make this about Noy. Hindi dapat kino-crucify ang naging mabuting tao,” she said.

Since the end of his term in 2016, Aquino was indicted for usurpation of legislative powers over the controversial Disbursement Acceleration Program (DAP).

In 2017, the former president, along with other officials, were also indicted for their role in the tragic 2015 Mamasapano operation that killed 44 police commandos.

In 2018, a criminal complaint was also filed against him and several others, including two of his Cabinet members, over the controversial Dengvaxia vaccine.

Turning emotional, Kris went on and said: “The very fact na wala siya dito today, he’s not okay, and maybe now he needs to. And he would never tell you na hindi siya okay.”

“Please include him in your prayers because he needs strength. I want a brother who will stay healthy, who will be alive because ayokong.. he’s 59. I’m sorry kung nawi-weirdan kayo pero iba ‘yong 9 na ‘yan. If you’re Chinese you know,” she added.