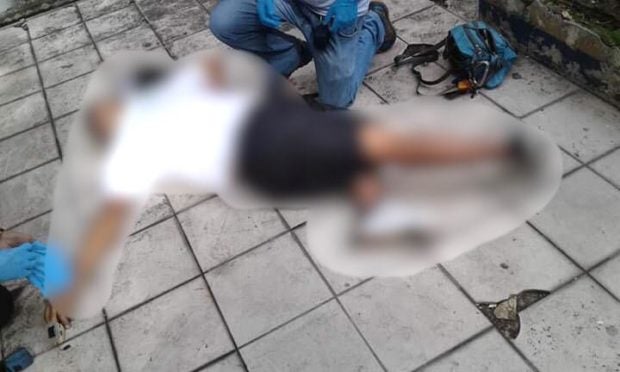 A medical responder attends to the man who reportedly jumped off a building at the Manila City hall on Wednesday. Photo from the Manila Police District Special Mayor’s Reaction Team

MANILA, Philippines — A man facing a case of rape died reportedly after jumping off the third floor of the Manila City hall building on Wednesday afternoon, authorities said.

Initial report from the Manila Police District’s Special Mayor Reaction Team identified the victim as Ricardo Reyes, who was arrested by members of the Pandacan police station on Tuesday for allegedly molesting a seven-year-old girl.

Police Lt. Col. Julius Añonuevo, of the Pandacan police station, told INQUIRER.net that Reyes was about to undergo inquest proceedings at the Manila Prosecutor’s Office when the latter allegedly started having trouble breathing.

Reyes then jumped from the third floor of the city hall building at around 2:45 p.m.

Reyes was brought to the Justice Jose Abad Santos General Hospital where he later died.

The Department of Health has said that every case of suicide is a tragedy that could be avoided. People who feel that they may be suffering from mental health and need help have been encouraged to call Hopeline hotlines at 804-HOPE (4673), 0917-558-HOPE (4673), or 2919 (toll-free number for Globe and TM subscribers).