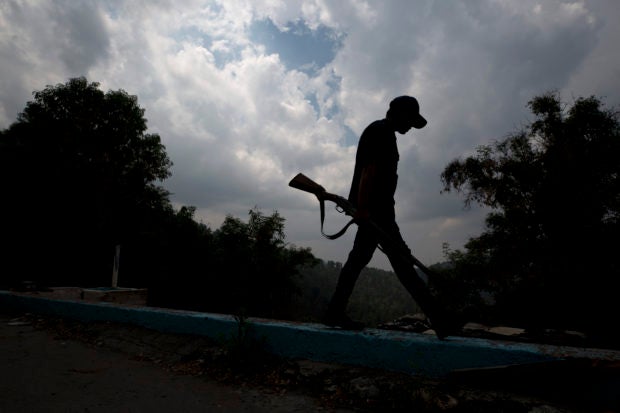 In this May 28, 2019 file photo, an armed member of the FUPCEG vigilante group patrols in Filo de Caballos, Guerrero state, Mexico. Mexico’s top security official, Interior Secretary Olga Sánchez Cordero, said on Tuesday, Aug. 20, 2019, that the government is talking to armed groups known as “self-defense” forces and vigilantes to try to bring peace to the country. (AP Photo/Rebecca Blackwell, File)

MEXICO CITY — Mexico’s top security official has said that the government is talking to armed groups to try to bring peace to the country.

Interior Secretary Olga Sánchez Cordero said: “We are in talks with many groups, and they have told us they do not want to continue with this violence.”

She mentioned groups in the northern border state of Tamaulipas and the southern states of Guerrero and Michoacan, but her office quickly clarified that she was talking about vigilantes rather than drug cartels.

Known as “self-defense” forces, some vigilante groups are infiltrated by gangs and fight each other. A number of such bands originally took up arms to fight the cartels.

The Interior Department said Tuesday that “the federal government does not have and will not hold talks with any organized crime group.” /kga