Go set up the meeting upon the request of key LGBTQ advocates led by Faustino Sabarez III. 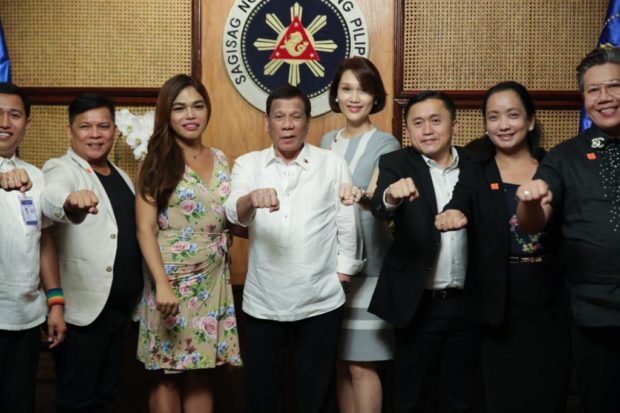 Likewise invited to the meeting were Bataan 1st District Rep. Geraldine Roman and Gretchen Diez, a transwoman who made headlines when she was prevented by a mall janitress from using the ladies’ restroom.

The President said during the meeting that the Palace will work with both houses of Congress to push for the approval of the Sexual Orientation and Gender Identity and Expression (SOGIE) equality bill that would protect the rights of individuals against discrimination.

Go mentioned that one of the proposals that was also discussed in the meeting was the possibility of creating a commission for LGBTQ pending the enactment of a SOGIE law.

In addition, the government, together with LGBTQ groups, also plan to organize a national LGBTQ convention where advocates from different regions will be represented. The convention will serve as a venue for the LGBTQ community to raise their concerns and come up with policy proposals to promote and protect their welfare.

The LGBTQ advocates expressed their gratitude after the meeting and are looking forward to the passage of a law that will protect them from discrimination before the President’s term ends.

“We are all equal under the law and it is our duty in this institution to ensure that all Filipinos—regardless of their age, sex, religion, ethnicity or gender orientation—are treated equally and justly,” Go said in the Senate session.

“As a country that prides itself for its diversity, it is our moral obligation to safeguard a culture of acceptance and inclusivity to ensure that our children and generations of Filipinos to come will live in a nation where they feel loved, cared for and accepted,” he added.