WASHINGTON – President Donald Trump insisted Tuesday that the U.S. already has “very, very strong background checks” for gun purchases in the latest sign that he is backing away from throwing his political support behind changes to the system that are opposed by the powerful gun lobby. 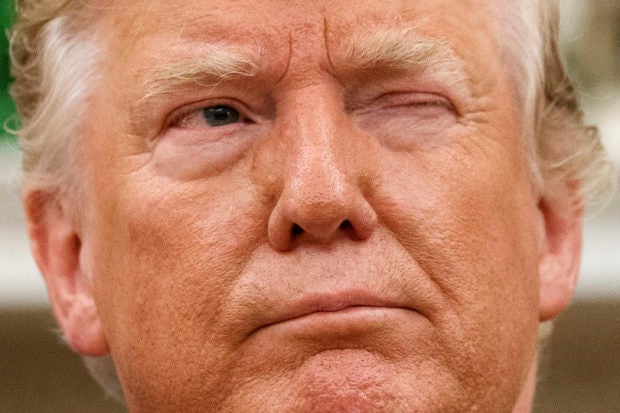 President Donald Trump winks at a journalist while speaking during a meeting with Romanian President Klaus Iohannis in the Oval Office of the White House, Tuesday, Aug. 20, 2019, in Washington. (AP Photo/Alex Brandon)

Speaking to reporters in the Oval Office, Trump also noted “a lot of the people that put me where I am are strong believers in the Second Amendment,” and suggested he worries about blurring the contrast between Republicans and Democrats on the issue.

“We have to be very careful about that,” he said.

A gradual rhetorical softening by Trump has taken place in the more than two weeks since gunmen opened fire in El Paso, Texas, then in Dayton, Ohio, leaving more than 30 people dead. Trump said in the tragedies’ wake that he was eager to implement “very meaningful background checks” and told reporters there was “tremendous support” for action.

But in the days since, Trump has changed his tone. He said Tuesday that, while the current system has “sort of missing areas and areas that don’t complete the whole circle,” it is overall “very, very strong” — even though federal law only requires background checks for guns sold through licensed firearm dealers.

And he said he worried about the potential risk of a “slippery slope,” where “all of a sudden everything gets taken away.” Just 11 days earlier Trump dismissed that very same “slippery slope” thinking, which he attributed to the National Rifle Association. “I don’t agree with that,” he said then.

The waffling drew anger from Democrats, including Senate Minority Leader Chuck Schumer, who said if Trump is serious about action he should call on Senate Majority Leader Mitch McConnell to put a House-passed background checks bill up for vote.

“These retreats are heartbreaking, particularly for the families of the victims of gun violence,” Schumer tweeted.

Republicans have refused to take up several Democratic-backed gun control bills that passed the House, and historically have opposed many efforts to strengthen the nation’s gun laws.

Sen. Chris Murphy, D-Conn., who spoke with Trump last week, said the president expressed support then for working across the aisle “to come up with a background checks bill that can pass the Senate and save lives.” While he said he would wait to hear from Trump again directly, he compared the episode to Trump’s flip-flop on background checks following the Parkland, Florida, shooting after intervention from the NRA.

“It’s time for Republicans and President Trump to decide whose side they’re on,” Murphy said in a statement. “Are they going to stand with the 90% of Americans who want universal background checks, or are they going to once again kowtow to the desires of the gun lobby?”

Trump, who has reversed course on gun issues throughout his adult life, had insisted when pressed by skeptical reporters earlier this month that this time would be different because the composition of the House and Senate had changed.

But a senior White House official pushed back on the notion that Trump was backing away from support for legislative changes, noting that Trump has repeatedly voiced a desire to get something done.

The person, who spoke on condition of anonymity to discuss internal deliberations, said that the White House’s policy and legislative affairs teams have been discussing potential options, in addition to ongoing conversations with members of Congress led by Eric Ueland, the director of legislative affairs.

LaPierre tweeted the two had discussed “the best ways to prevent these types of tragedies,” and called Trump “a strong #2A President and supports our Right to Keep and Bear Arms!”

While two Democrats on the Hill described talks with the White House as largely stalled, others said White House officials have been engaged in continued conversations with Democratic and Republican lawmakers. That includes staff-level conversations with Murphy’s office since he spoke with Trump last Sunday, according to one Senate staffer.

“The White House has been very responsive to our office,” said Steve Kelly, a spokesman for Republican Sen. Pat Toomey of Pennsylvania, who has long pushed a bipartisan expanded background check bill with Democratic Sen. Joe Manchin of West Virginia. “We’ve had ongoing conversations, at the staff level, with the White House regarding background checks both last week and this week.”

Republicans have been trying to build support for more modest measures, including so-called red-flag bills from Sen. Lindsey Graham, R-S.C., and Sen. Marco Rubio, R-Fla., that would allow friends and family to petition authorities to keep guns away from some people. But those efforts are also running into trouble from conservatives, who worry about due process and infringing on gun owners’ rights.

Meanwhile, NRA spokeswoman Amy Hunter said the group “has always supported efforts to keep firearms out of the hands of criminals and the dangerously mentally ill” and “appreciates the president’s desire to find logical ways of accomplishing that goal.” /gsg